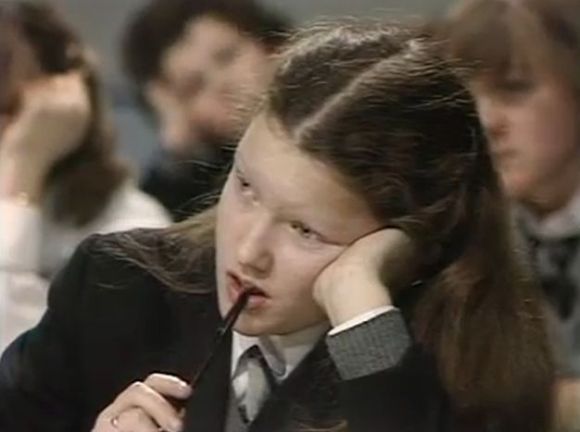 The end of year exams are fast approaching and Susi’s feeling the strain.  Miss Summers later tells her that the first year exams aren’t terribly important, but Susi’s mother is putting considerable pressure on her.

Next year she’ll be in the top set in French and English, but in a lower set in Maths.  This comes as a disappointment to her (although it’s clear that it’ll be more of a disappointment to her mother).  Miss Summers is able to explain that it’s no disgrace to be in a lower set in some subjects, it simply means that she’s not quite as good at Maths as she is in other subjects.  Therefore it’s better that she’s placed in a set with others of a similar ability, rather than struggle along in a higher set.

There’s a clear divide made between Mrs McMahon and Penny’s mother, Mrs Lewis.  Mrs McMahon never seems to give her daughter any encouragement at all and also tells her that she’ll be voting to keep school uniform in the upcoming referendum.  Mrs Lewis is a much more relaxed character (for example, she’s quite happy to vote for the abolition of uniform).  The juxtaposition between the two mothers makes a telling point – if Susi didn’t feel her mother’s constant disapproval thenno doubt she’d be a much happier person.

Mr McMahon (Bill Treacher) is more supportive, telling Susi she can only do her best, although he’s rather distant, which seems to make it clear that Mrs McMahon is the driving force of the family.  This is Mr McMahon’s only appearance and it does come as a slight shock to see a rather well-spoken turn from Treacher (later to become very familiar thanks to his decade or so as Arthur Fowler in Eastenders).

Elsewhere, Tucker finds an exam paper which he’s convinced is the one they’re about to sit.  We’ll revisit this plot-line in later years when Pogo tries to make a profit by selling questions from a paper he found. Here, Tucker doesn’t attempt any such free enterprise – he’s happy to share for free – but it doesn’t take a mind-reader to work out that it’s clearly not going to end well.  Mr Mitchell’s reluctance to act, although he knows that something’s going on, makes it plain that whatever Tucker’s found, it’s not that year’s paper.

This is made quite obvious when none of the questions come up in the paper they take – resulting in poor Tucker suffering attacks from all of his angry classmates!

The referendum to make school uniform optional votes in favour of the proposal by a narrow majority, to the delight of many.