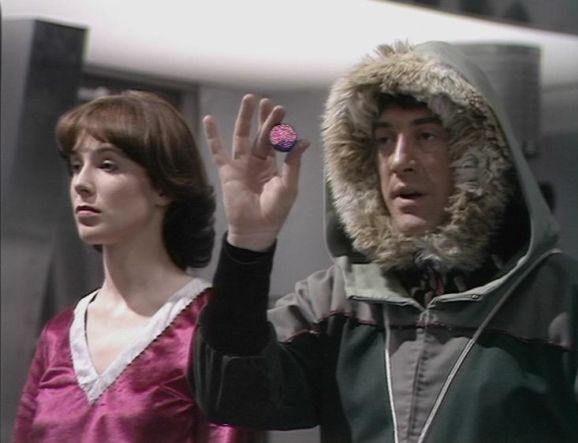 The Liberator has travelled to an icy, inhospitable planet in order for Blake to make contact with the resistance leader Avalon (Julia Vidler).  Avalon has started resistance movements on a dozen Federation planets and has requested Blake’s help in relocating somewhere safer.

Blake is keen to assist, but when he and Jenna teleport down they find a scene of devastation – clearly the Federation has beaten them to it.  Avalon isn’t amongst the dead though – they learn from the sole survivor, Chevner (David Bailie), that she’s been captured.  So Blake sets out to rescue her, not realising he’s fallen into Travis’ trap …..

Time has obviously moved on since the events of Seek Locate Destroy and Duel and it’s interesting to note how the Federation’s plans have changed.  In Seek Locate Destroy, the apprehension of Blake was their main objective – now it appears that capturing the Liberator is just as important, if not more so.

The notion that there’s been some unseen adventures between Blake and Travis is confirmed when he bitterly mentions to Servalan he’s twice had the chance to destroy Blake, but it would have meant destroying the Liberator as well, so he was forced to disengage.  Servalan concedes this, but in an early display of the same needling relationship they’d enjoy from now on, tells him that whilst she’s defended him, he needs to capture Blake soon or he’ll be replaced (and no doubt his life will be forfeit).

It’s clearly meant to be a surprise that Avalon is female – a mere girl leading a resistance cell! – and this is reinforced by Dudley Simpson’s tinkling piano just before she’s captured by Travis.  Once she’s in his power, she’s reduced to her underwear and strapped into a very uncomfortable-looking machine for a purpose which only becomes clear later on.  Whilst it’s no surprise for a female character to become an objectified figure in a late 1970’s British science fiction series (or indeed any series of this era) it’s still slightly eye-opening.  When Blake found himself in a similar machine, his modesty was rather better preserved!

Whilst Avalon is helpless, Travis tells her that she should be flattered to receive such “special” attention.  She replies that “anyone who opposes the Federation knows what to expect if they get captured. It’s a risk we’re all prepared to take.” It’s a difficult line to deliver and it’s fair to say that Julia Vidler does struggle somewhat in depicting the idealistic young rebel (her delivery tends to stay on something of a monotone).  It’s probably a blessing that later she reappears as an emotionless android – she manages to play this rather more convincingly.

Rather more engaging is Glynis Barber as this week’s Mutoid sidekick.  I’m not sure whether it’s as scripted, or just her performance choice, but Barber’s considerably more assured and confident than Carol Royle’s Mutoid in Duel was.  This works very well –  as she operates more as an equal with Travis in the early part of the episode, rather than living in his shadow.

Director Michael E. Briant had previously filmed in Wookey Hole for the 1975 Doctor Who story Revenge of the Cybermen.  Although the caves are a lot smaller than you might think, it’s still a very good location and makes a nice change from Blakes 7′s default locations (quarries, refineries, nuclear power plants, etc).   This wasn’t the only link to Briant’s previous work on Doctor Who as he cast David Bailie (who had appeared in The Robots of Death) as the doomed Chevner.

Alas, the silly looking robot pops up again.  His first scene is priceless – since he speeds along a such a lick it’s obvious he’s being wheeled on a board.  Indeed, if you freeze frame, there’s a tell-tale flash of the board to confirm this!  Like the Daleks and K9, he was clearly a robot with serious mobility issues.

Gan’s very taken with Avalon (or at least what appears to be Avalon).  His hero-worship (if that’s what it is) does allow David Jackson an entertaining scene towards the end of the episode.  Once it’s become clear that Avalon isn’t all she appears to be, Gan attempts to strangle her – but Avalon’s super-human strength stops him.  I wonder why the limiter didn’t prevent him from hurting her?  Is his implant so clever that it knows what appeared to be Avalon was only an android or is it just a case of selective scripting?

It may come as no surprise to learn that Travis’ rather elaborate plan doesn’t succeed and he finds himself, for the first time but certainly not the last, relieved of his command.  His closing words are a none too subtle hint that he may be down but he’s far from out. “If it takes all my life, I will destroy you, Blake. I will destroy you. I will destroy you.”

One thought on “Blakes 7 – Project Avalon”