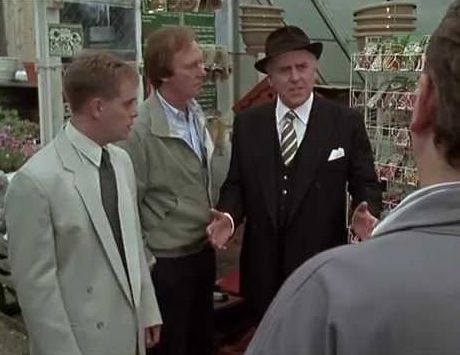 Following George Cole’s recent death, I had a hankering to watch some episodes of Minder as a tribute.  In the end I plumped for the seventh series – which for me is one of Minder‘s strongest runs.

Although the earlier episodes are grittier, there’s something rather appealing about these six episodes (broadcast in early 1989).  Partly, it’s the quality guest stars – Minder had always attracted decent casts, but there seems to be even more familiar faces in these episodes (Roy Kinnear and Ronald Fraser in this one and the likes of Brian Blessed and Ian McShane later on).

Some people though, especially Dennis Waterman, had decided that Minder had become too comedic and had lost its edge (which was the reason he decided to leave at the end of this series).  I personally disagree, but although Minder carried on for several more years the departure of Waterman was the clear end of an era.

One notable aspect of It’s a Sorry Lorrie Morrie is the gentle highlighting of Waterman’s advancing years.  Terry has always famously been a bird magnet, but when he attempts to chat up a young woman in the launderette he gets short shrift – she tells him he reminds her of her father!  It’s got nothing to do with the plot, it’s just a nice character moment that acknowledges his advancing years.

The plot’s quite simple – Arthur buys a job-lot of electrical goods from Morrie (James Marcus).  Terry picks them up and drops them off at Arthur’s new car-site.  Of course, the goods are stolen and the police stake the van out – waiting for the criminals to return.  Terry’s prints are all over the cab, so he faces a lengthy stretch inside.

But the joy of Minder isn’t the plot, it’s the interactions of the characters.  George Cole’s on fine form as the temporarily world-weary Arthur, who’s persuaded by the eager young Justin (Mark Farmer) to make a deal with Morrie.  Justin is Arthur Daley’s number one fan – for reasons never quite explained – and he mistakenly thinks he’s doing Arthur a favour by introducing him to Morrie.

Ronald Fraser is perfectly cast as the booze-soddled Self-Inflicted Sid.  Sid is a pathetic character – someone who hangs around the fringes of the criminal fraternity, hoping to be accepted.  He looks pretty mean, thanks to a large scar down the side of his face, although Arthur tells Justin that Sid did the damage himself (with a razor) in the hope it would make him more acceptable to the criminals he wanted to emulate.

Although the tone of the episode is quite light, there’s a dark moment when Arthur asks Sid to torch the van under the noses of the watching police.  If the van is torched, then Terry’s fingerprints are destroyed and he’s off the hook.  Arthur has no compunction in manipulating Sid, especially since he knows that Sid will do anything he’s asked, but Terry does have a moment of conscience.  But the moment passes, and Sid sets off to do the deed.

Chisholm (Patrick Malahide) departed during the 1988 Christmas special, An Officer and a Car Salesman, so DS Rycott (Peter Childs) is now the senior officer tasked with making Arthur’s life a misery – although DS Jones (Mark Povey) has stepped out of Chisolm’s shadow and is quite keen to make Rycott’s life a mystery too.

Peter Childs’ performances during series seven are another reason why these episodes are so enjoyable.  Sadly. they would be his last appearances as Rycott, as he died in late 1989 at the age of just fifty.  Later series of Minder would feature various actors in the police roles (including a young Stephen Tompkinson) but none had the comic chops of Childs.

The best moment comes when Arthur and the others drive round to see how many police are staking out the van.  Arthur’s in the back of another van and he pops his head up to look out the back window – straight into Rycott’s unbelieving face!  It’s clearly signposted before it happens, but that makes the moment even better – between Cole’s shocked expression and Childs’ unbelieving stare, it’s comedy gold.  Luckily for Arthur, Rycott passes it off as an hallucination!

Another interesting touch is that although Morrie swindles Arthur out of five thousand pounds for a van-load of goods that he’s had to destroy, Morrie isn’t forced to pay the money back.  Arthur does make a little money (thanks to another of Justin’s schemes) but Morrie walks away.  This might be a hint that Terry’s days as a top-line minder are coming to an end.

Morrie has some imposing muscle (including a pre-Eastenders Steve McFadden) and although Terry throws a few punches, he’s persuaded to walk away.  Maybe it was felt it wouldn’t be realistic for Waterman to beat two much younger men, and this might have been another reason why Waterman decided to leave the series.

All this and Roy Kinnear’s last small screen appearance as well – It’s a Sorry Lorry Morrie is a cracking episode.

One thought on “Minder – It’s a Sorry Lorry Morrie”