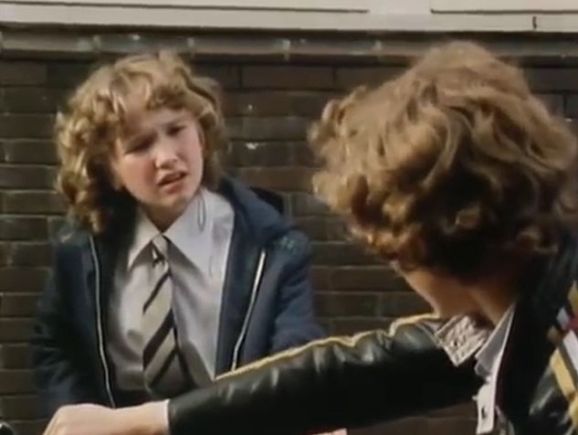 Claire challenges Duane to a bike race, although it’s quite noticeable she starts before he’s ready!  Despite this, he manages to catch up and they finish in pretty much a dead heat.  But Pogo infuriates her when he tells her that Duane won – he wasn’t watching, but he knows he did because boys are better than girls.

This is just one of a number of incidents which convinces Mr Sutcliffe that the annual end-of-term pupils versus teachers contest would be more interesting if it was organised across male/female lines.  This doesn’t go down well with Mrs McClusky, who tells him they should be discouraging sexual inequality not breeding it.  For once though she doesn’t get her own way as Mr Sutcliffe easily bests her in the argument.  So we can score one to the male sex!

In some ways this episode marks the end of an era.  There would be a Christmas Special later in the year with the class of 1978, but they would feature very intermittently during series five (there’s only a single series five episode where Tucker and co are anything but peripheral characters).

Back for only the second time during series four is Benny.  He doesn’t do much, although he does have an interesting line in politically incorrect jokes.  “What’s the quickest way to get out blackheads? Smash a window in Bradford.”

The males versus females contest is divided into three parts – a quiz, a sporting event and a practical one.  I love the way that Matthew has to whisper the answer to a tough maths question to the teacher!  Thanks to that spot of cheating, the boys win the quiz round.

The girls win the netball match, much to the dismay of Mr Baxter, which leaves the practical contest.  The boys are baking a cake and the girls are making a trowel.  Both of their efforts are disastrous, but they each have a perfect cake/trowel ready – which they swop when Mr Sutcliffe/Miss Mooney aren’t looking.  The reactions of the two teachers at the unveiling (“That isn’t our cake. That isn’t our trowel”) is lovely and there’s a nice sense of irony that the boys and girls really are equal (since both equally cheated!)

With the practical contest a draw, that means also that the whole contrast was a draw as well.  This was clearly the only way that things could have ended, otherwise there would have been ructions!  It’s an amusing way to end a consistently strong run of episodes.  When Grange Hill returned for its fifth series, it would have a new producer, a new intake of first-years and a slighter tougher feel as Gripper began to take control.