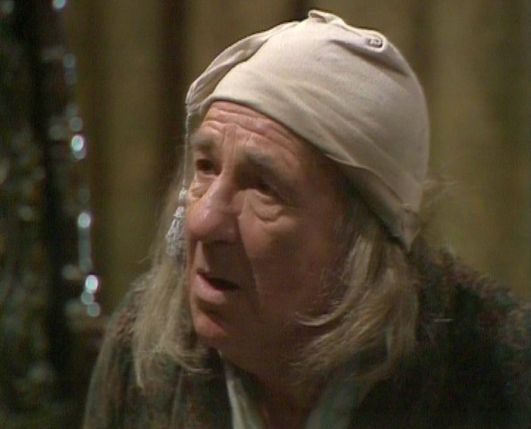 Broadcast on the 24th of December 1977, it’s fair to say that they don’t make them like this anymore.  This production of A Christmas Carol is completely studio-bound and at times places characters, via the wonder of CSO, in front of illustrated backdrops.  For some, this artificiality might be an issue but I feel that the non-naturalistic moments are strengths not weakness.

One of the main pluses of the production is the quality of Elaine Morgan’s adaptation.  Since Dickens’ novella isn’t particularly long, Morgan was able to compress it down quite comfortably to just under an hour.  Everything of note from the original story (including much of the dialogue) has been retained and it’s interesting that the likes of Ignorance and Want (often removed from other adaptations) are present and correct.

Michael Hordern, an actor who always seemed to play bemused and vague characters, makes for a very decent Scrooge – although since he lacks bite and arrogance, Hordern’s better as the story proceeds (especially when Scrooge is finally presented to us as a humble and chastised man).

John Le Mesurier only has a few minutes to make an impression as Jacob Marley, but he certainly does.  His scenes with Hordern were complicated by the fact that both weren’t on set at the same time (Marley, as befits a ghost, is only ever seen as an insubstantial presence).  This isn’t really a problem though, as both actors had such good timing they were able to make their scenes ‘together’ work.

The arrival of Patricia Quinn as the Ghost of Christmas Past sees Scrooge revisit his own past.  The establishing shots of Scrooge’s schoolhouse are presented via a series of illustrated images, with Horden and Quinn overlaid.  You can either view this as a necessity, due to the production’s low-budget, or as an inspired artistic choice.  One nice moment occurs when we move into the schoolhouse and there’s another illustration – which then morphs into a real-life scene.

Almost unrecognisable, thanks to a heavy beard, is Bernard Lee as the Ghost of Christmas Present (although his voice is unmistakable).  Paul Copley is slightly too jolly and irritating as Fred, but this a rare production mistep.  Clive Merrison, with an impressive wig, is a fine Bob Cratchit whilst Zoe Wanamaker is equally good as Belle.  There’s plenty of other familiar faces, including John Salthouse, John Ringham, June Brown and Christopher Biggins whilst the brief opening narration is provided by (an uncredited) Brian Blessed.

Although there are many versions of A Christmas Carol available, this one is certainly worth your time – partly because of the quality of the cast, but also due to its fidelity to Charles Dickens’ story.  Plenty of other adaptations can’t help but make various ‘improvements’ but Elaine Morgan was content to let the strength of the original tale speak for itself.