Skip to content
HomeSergeant Cork – The Case of the Girl Upstairs 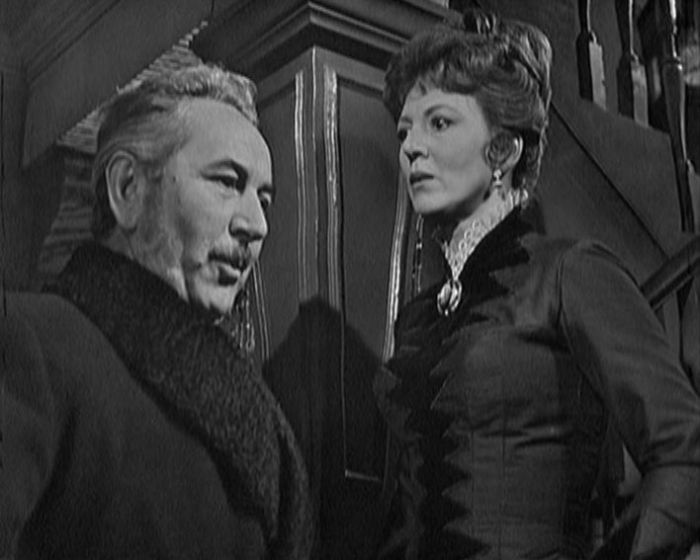 Returning to his rooms following a long train journey, Cork is looking forward to a quiet evening and a bite of steak and kidney pudding.  So he’s less than impressed to find Marriott waiting with a Miss Beesley (Margaret Diamond) who has a matter she wishes to discuss urgently.

She’s convinced that her niece Jane (Meg Ritchie) is being poisoned by her stepmother Charity (Mary Kenton).  Following her brother’s death Miss Beesley has been barred from the house, but she recently caught a brief glimpse of Jane and was shocked by her appearance.  Jane is attended by a doctor, Ernst Lukas (Joseph Fürst), but Miss Beesley has a very low opinion of him.

After an opening scene of Jane suffering under Charity’s ministrations (she’s forced to sleep in a room with the windows open and a single blanket) we get a brief glimpse of Cork’s home-life.  Cork has comfortable rooms and an indulgent landlady who ensures that he has hot meals. It’s clearly a pleasant enough existence but it’s an early indication that there’s no significant other in his life.

Cork seems initially unimpressed by Miss Beesley’s suspicions, which she counters by asking if he is “always governed by fact in everything you do? Are you never swayed by instincts, by feelings?” He responds that he often acts on his instinct and agrees to investigate.

It’s clear from the start that Charity Beesley is waging psychological warfare on her step-daughter, but it’s not clear why.  Mary Kenton is chilling as Charity, whilst Meg Ritchie is convincingly overwrought as the unfortunate Jane.  Joseph Fürst (complete with monocle) gives an understated performance as Dr Lukas.  For me, it’s impossible not to associate Fürst with his gloriously over the top performance as Zaroff in the Doctor Who story The Underwater Menace, but that seems to have been something of an aberration.  Apart from Zaroff, he tended to play sinister characters who were much more grounded in reality (for example, his two Callan appearances).

Lukas is revealed to be brilliant, but also unorthodox and unbalanced.  For him, Jane is nothing more than an experimental subject.  He has no desire to kill her – that would invalidate the experiment – but also has no compunction in pushing her to the edge of madness.

It’s a bleak ending – Cork, Marriott and Arthur Lowman (Philip Latham sporting a rather obvious false beard – not the last time we’ll see fake face fungus in this series) rescue the girl, but Lowman is pessimistic about whether she’ll ever come to her senses.  So whilst the guilty will be punished it seems that the innocent are fated to suffer as well.

The Case of the Girl Upstairs is quite slowly paced but it’s still a satisfying story, thanks to a brief, but memorable, guest turn by Joseph Fürst.