Skip to content
HomeSergeant Cork – The Case of the Slithy Tove 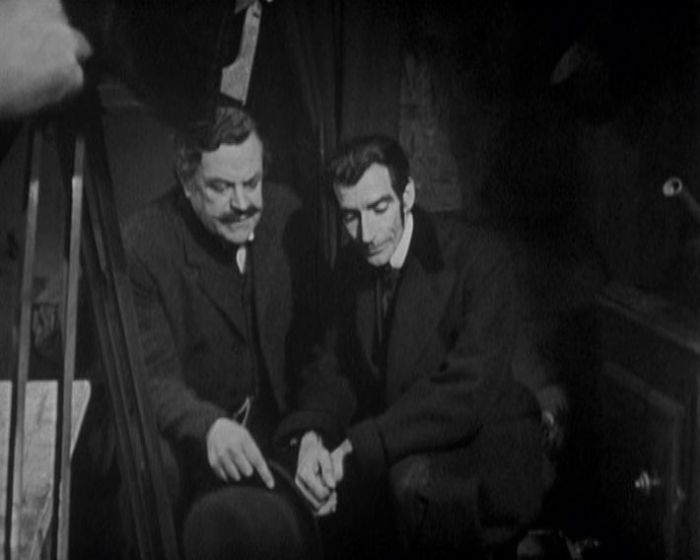 The death of an ex-villain called Trumble provides Cork with a puzzling mystery to unravel.

Trumble was well known to Cork and the news of his murder is greeted with sadness by the Sergeant.  His attitude is in sharp contrast to Inspector Bird, who views Trumble’s modest house with distaste and asks Dr Stuart (Robert James) “what is a case like this to do with people like us?”  Trumble’s death has caused unrest in the East End and the police are struggling to maintain order.  This also irks Bird.

The arrival of Cork changes things.  Unlike Bird, he’s happy to talk to the unruly crowd and he tells them that Trumble was just as much his friend as he was theirs.  His bluff way does the trick and the crowd disperse – although it’s noticeable that Bird doesn’t acknowledge this.

Cork brings the police photographer Perryman (John Junkin) to the crime scene.  This is something else that irritates Bird – why waste resources on such a squalid case?  Cork reminds him that photography is now becoming standard (a sign that the police are slowly beginning to embrace modern technology).  Fingerprints, one of Cork’s hobby-horses, are also mentioned, although Bob reminds him that they can’t be used in evidence.

Rex Firkin spent most of his career working as either a producer (Emergency Ward 10, The Planemakers, The Power Game) or an executive producer (Budgie, Upstairs Downstairs) but he did direct from time to time.  His sole Cork credit is unusual, as he didn’t have a production role on the series (unlike most of the other programmes he directed).  Based on the evidence of this episode it’s a pity he didn’t direct more.  The opening scene is especially interesting – the camera moves from the street (studio-bound, naturally) into Trumble’s house and then back out again.  Following Trumble’s death the camera follows a young urchin (John Barnham) as he ducks out of sight (Firkin is able to make full use of Anthony Waller’s well designed street set).   Sound effects (horses’ hooves, barrel organs) also help to create the illusion of a busy thoroughfare.

The Case of the Slithy Tove has a very strong guest cast.  Ann Lynn is vulnerable as Trumble’s daughter Nora and the always dependable Robert James has a decent role as Dr Stuart.  It’s a pity that James never returned as the doctor as he would have been a good semi-regular,  but James does have two further Cork credits (playing different characters).  Peter Fraser (probably best known for playing David Campbell in the Doctor Who story The Dalek Invasion of Earth) is slightly wooden as Nora’s fiance, Sam Manners and whilst it’s always nice to see  John Junkin, he has little to do as Perryman.  Bruce Beeby, who amongst various roles played Mitch in the radio serial Journey into Space, is the enigmatic Lake.

The identity of Trumble’s murderer is a mystery until the end.  Cork, who’s fond of quoting poetry during the episode, declares that he’s a slithy tove. Earlier, for the benefit of the audience, he’d explained that “a slithy tove is a slippery customer, it’s only when you turn your back you’re sure he’s behind you. Face him and he’s faceless.”

Cork does eventually run him to ground, but the story he has to tell is unexpected.  This leaves something of an open ending – Bob asks Cork what he plans to tell Inspector Bird, but Cork doesn’t answer.  It was common for Sherlock Holmes to decide at the end of a case that no further action would be taken, but he was a private individual and not bound by the law.  Would Cork feel it was his duty to report everything he knew to Bird or would he decide that things were best left as they are?

The first of eight Cork scripts by Bruce Stewart (who would later pen three of the four Timeslip serials) The Case of the Slithy Tove is another very enjoyable series one episode.