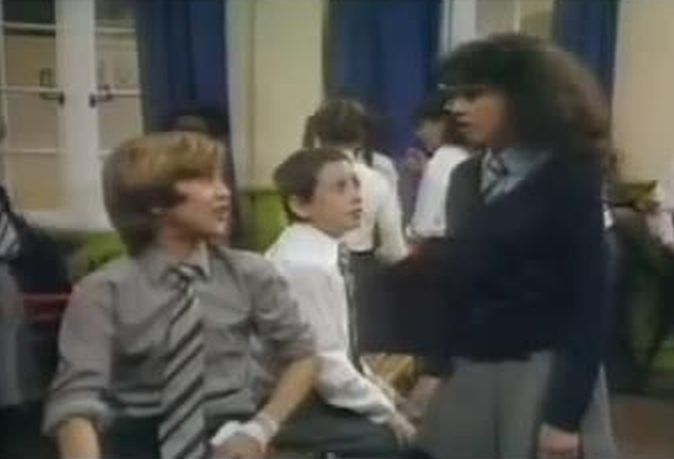 Gripper and Denny continue to extort money from Roland, but he’s far from their only victim.  Jonah and Zammo are also targeted and both (reluctantly) pay up.  Jonah doesn’t seem too bothered – ten pence a week seems a small price to pay for not getting your head kicked in – but Zammo sees the bigger picture.  If they give in now then Gripper will always be there and his demands will only increase.  Zammo briefly considers taking Gripper on, but quickly admits that it wouldn’t be an equal fight.  Neither seems to consider that if they find Gripper’s other victims there would be safety in numbers.

This episode provides us a good opportunity to stop and examine how proactive the school was at dealing with Gripper.  Jonah and Zammo tell Mr Hopwood about Gripper’s demands for money, but he seems initially disinterested – as it’ll be their word against his how can anything be proved?  However he does decide to ask Gripper to turn out his pockets – and finds a considerable amount of change – which does back up the boy’s story.  Hopwood warns Gripper to cease his actions (threatening him with physical violence in a way that wasn’t unfamiliar in the early series of Grange Hill) but that’s as far as he goes.  Surely experience would have told him that Gripper wouldn’t give up that easily?

Roland’s experiences are even more interesting.  He’s skipped school several times (in order to avoid Gripper) and most disturbingly of all deliberately cuts his hand with a chisel in woodwork.  He hopes to be sent home and is clearly upset to be told that the nurse will be able to deal with it by putting on a plaster.  Whilst this foreshadows the more extreme measures he’ll take later in the series to escape Gripper, it should have sent alarm bells ringing amongst the staff.  Mrs McClusky does want the boy to see an educational psychologist, but it’s plain that they consider the problem is purely down to Roland’s attitude.  Even after he’s told them that he’s been systematically bullied they don’t seem interested in finding out if his story was true.  Is it that they simply believe he’s making up tales to explain his bad behaviour?

Elsewhere, there’s light relief as Annette attempts to gain revenge on Jonah by throwing a stink-bomb at him.  She indirectly does him a good turn – he and Zammo were being threatened by Gripper at the time and the smell is enough to drive the older boy off.  Leaving us with the immortal line from Jonah.  “Cor Gripper, you’ve done something in your trousers”!