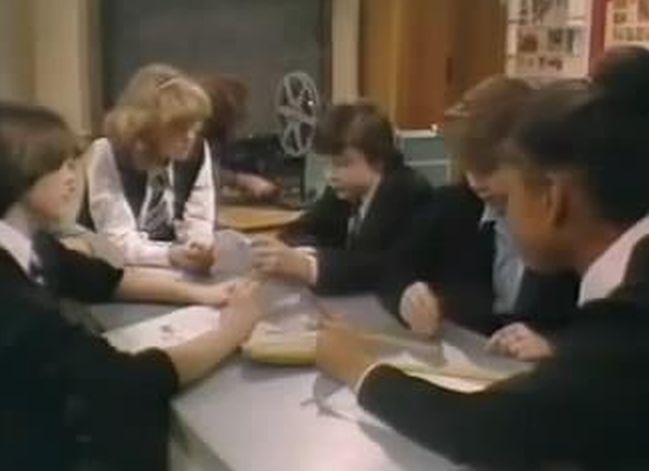 Sex education raises its head in this episode and you get the feeling that it’s going to be something of a struggle for Mrs Thomas (Susan Porrett) to get through to her unruly band of third years.  She tells them that “over the next few weeks we’ll be discussing how the human body creates new life, something which is at once miraculous, joyous and very beautiful.”  Alas, this uplifting statement is greeted with a comment of “give us a kiss love”!

The class have to take a slip home to their parents or guardians to sign, agreeing that they can be taught the lesson (which causes Anita to mutter darkly she doesn’t know what her gran will say).  Anita’s gran remains a never glimpsed figure, although a traumatised Mr Baxter tells Mr Hopwood that he spent half an hour in her company (she seems to have given him a considerable ear-bashing).

The upcoming lesson gives Gripper the chance to victimise Matthew Cartwright by taunting him that he doesn’t know the facts of life.  It’s no surprise that money’s never far from Gripper’s mind and he tells Matthew to bring twenty pence in the following day and Uncle Gripper will tell him all he needs to know.  This seems to involve Matthew losing his trousers, which Mr Baxter retrieves.  He then gives the boy the following advice.  “Look son, if somebody has a go at you don’t just stand there. No matter how big they are give them some back, right?”  Typical Baxter, but Matthew’s the last person in the world to do so.

It’s also no surprise that Pogo eyes an opportunity to make a little money and he steals one of Mrs Thomas’ sex education books and offes to show it to the first years for a price.  Claire’s mother isn’t happy about the lessons, telling Mrs McClusky that her daughter is “young and idealistic and very innocent.  I don’t want her to be spoiled, not just yet.”  When Claire finds out her mother has come to school she’s far from pleased.  Mrs Scott tells her that they’ll discuss it at home later.  “Stuff it” responds Claire, which indicates that her daughter is growing up, whether she likes it or not.

Mr Cartwright is disturbed about the victimisation his son has received at the hands of Gripper and makes an appointment to see Mrs McClusky.  Is it too much of a stretch to say that she’s prepared to take action immediately because the Cartwrights are a nice, middle-class family?  Roland’s tales of bullying seemed to be dismissed out of hand in the last episode, so it’s possible.

What’s clear is that the school’s sex education policy has been something of a disaster, although Mrs McClusky attempts to paper over the cracks by offering to host a meeting where the parents can air their views and also discusses the classes with the pupils.  One positive outcome is that Gripper is run to ground, but whatever punishment he received obviously didn’t curb his behaviour, as we’ll see.