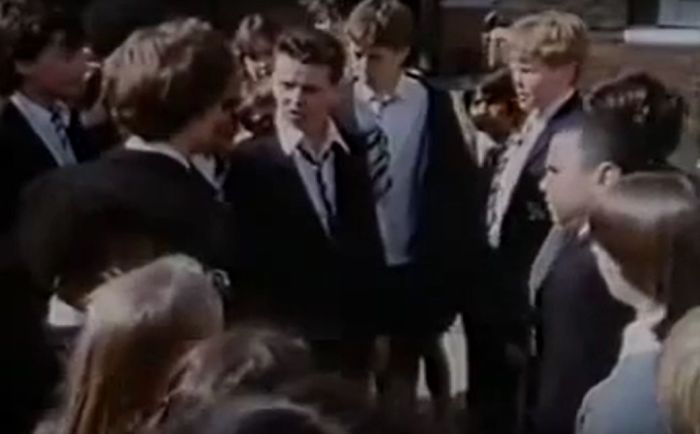 The first episode opens with a directorial flourish from Carol Wilks – a remarkably high panning shot which slowly tracks along rows and rows of houses. The camera then zooms into a selected house as we see Randir Singh (Kakir Singh) setting off for school.

That Randir is being positioned, even this early on, as something of an outsider is suggested by the fact that he’s carrying a satchel (generally only swots like Justin tend to have them) although it could have been provided so that Mr Smart can later crack a sort of Shakespearian joke at his expense.

As Randir walks down the street (and also as Jonah makes his way to Zammo’s flat) there’s an interesting use of non-diegetic sound – we hear a radio playing with Mike Read spinning a series of discs seemingly designed to sap the spirits of all those children returning to school for the new term.

If anybody ever picks up Grange Hill for DVD release (unlikely I know) then it’s a fair bet that one of the tracks, Pink Floyd’s Another Brick in the Wall, would be snipped out, although at least it does play out over a scene where there’s no dialogue, so a substitution would be fairly straightforward.

The early part of the episode reintroduces us to the main characters. It’s our first sight of Roland since he fell under a car late in series five and, no surprise, he’s still far from willing to go to school. That no progress has been made, even after all his meetings with the educational psychologist, is made clear after he complains that he’s got stomach pains. Mrs Browning (one of Jo Kendal’s final appearances, as she’ll be later written out – leaving Roland and his father to fend for themselves) tells him that’s a pity as she’ll have to throw his breakfast away. Unsurprisingly he then perks up and suggests he could manage something. It’s a gag in one way, but it’s also quite a sad and depressing moment.

There’s a new teacher in town, Mr Smart (Simon Haywood). His name is a none too subtle joke, Smart by name, smart by nature. To begin with, he’s a tidy and precise martinet – a stickler for discipline (his undisguished shock at Mr McGuffy’s appearance and attitude is plain to see). But whilst he may be something of a two dimensional figure this year, over time he develops and by series eight he’s a much more relaxed, humorous and approachable figure. But no doubt this was in part due to Mr Bronson’s debut in series eight, necessitating Mr Smart’s realignment as a more sympathetic character.

Jonah starts off in a very annoying fashion and Zammo’s very dense. The laboured gag that Jonah was allowed into a shop that banned Grange Hill pupils because he’d sown on a Rodney Bennett badge was painfully obvious to everyone. Everyone that is except Zammo who doesn’t notice what’s  right in front of his eyes. It’s  also the first mention of Jonah’s Rodney Bennett cousin Jeremy (Vincent Mathews) who’ll return a few times, most notably during series seven.

Gripper’s up to his usual tricks of demanding money with menaces and is delighted to welcome his old customer Roland back. That Roland is more integrated into the school community seems obvious after the others rally round to try and make him look a little more presentable after Gripper’s done his worst (Jonah offering to sew his blazer buttons back on, for example).

Gripper’s interest in Claire (which fills her with disgust) is given its first airing, but the most notable part of this episode is how everybody bands together to finally bring an end to Gripper’s extortion racket. Logically it had to happen – given that his persecution of Roland and the others seems to be common knowledge it would have stretched credibility to breaking point if he’d simply picked up where he’d left off.

But as we’ll see, it’s the arrival of new boy Randir that suggests a new course of action to him.