Skip to content
HomeTop of the Pops – 1977 Christmas Special

Sandwiched in between a repeat of Are You Being Served? (The Father Christmas Affair) and HM The Queen was the 1977 TOTP Christmas shindig. As with some previous years it was split into two (the second installment popping up on Boxing Day). Since I’m a glutton for punishment I’ll be watching both (wish me luck). Let’s tackle the 25th first though ….

David ‘Kid’ Jensen (velvet suit, ruffled shirt, dicky bow) and Noel Edmonds (blue suit, stripy wide tie) are your hosts today. But they’ve barely time to exchange yuletide felicitations before up pop Showaddywaddy with You Got What It Takes. The sort of group designed for colour television (pity those still watching in black and white as they’re denied the full glory of the Showadd’s stage outfits) the group do their retro rock’n’roll shtick as well as ever. And not only do they manage to sing and play, they also pull a few crackers and tuck into some Christmas nosh.

Denice Williams, with Free, is next. Sorely lacking in Christmas trimmings, she has to get by with just the power of her song. Luckily it’s a good one and – singing live – manages to hit the warbly high notes without embarrassing herself.

1977 has seen lots of new names in the charts, the ‘Kid’ tells us. The ears prick up at that – could this be, at long last, one of those new-fangled punky bands? Things seem promising when he goes on to say that the next act were one of the most outrageous. Hurrah! Who could these anti-establishment types be?

I’m not too disappointed though, as I do love this version of The Floral Dance (so much so, it’s one of the tracks on my ‘favourites’ playlist in Spotify). In fact, I love it so much I think I’ll listen to it again. Excuse me a moment ….

Noel and the ‘Kid’ are reunited for some torturous banter, which is their way of introducing Legs & Co dancing to Fanfare for the Common Man by ELP. Legs & Co are looking mighty fine today it has to be said. There’s plenty of Christmas trees and dry ice too (for those who like that sort of thing).

Leo Sayer, presumably wearing the jumper his mum bought him for Christmas, is next on with When I Need You. Unfortunately no-one seems to have needed him, as the audience are conspicuous by their absence. Keeping the ambiance at a fairly soporific level are the Manhattan Transfer with Chanson D’Amour (rat de dat de dah). It’s almost like I’ve switched on to an episode of The Two Ronnies.

Hot Chocolate and You Win Again are wheeled on next. Not a very jolly song for Christmas Day, but Errol attempts to leaven the tone of the lyrics by smiling throughout – which sort of works. The set decoration (balloons) also helps to raise the party atmosphere a smidge, although by now the absence of a studio audience is becoming rather noticeable.

David Soul (Don’t Give Up On Us) and ABBA (Knowing Me, Knowing Me) are both on film and both continue the downbeat relationship feel of the show. At least David seems hopeful that things might work out (he’s probably deluding himself though) whilst ABBA are certain it’s the end. Hey ho. Let’s hope for something cheerful next.

Ah, that’s better – it’s Space with Magic Fly. Things then settle down again with Johnny Mathis and When A Child Is Born (one for the mums I think). Sitting amongst a pile of greenery in a director’s chair, it’s one of the odder TOTP staging decisions. Couldn’t they have popped a few baubles on the trees to make them look just a little Christmassy?

Legs & Co (dressed as Reindeers) are joined by a black Father Christmas, no doubt to reflect the fact that they’re all dancing to Sir Duke by Stevie Wonder. Yes it’s as bonkers as it sounds, thank goodness.

The maudlin tone of the show returns with Kenny Rogers and Lucille on film. Fair to say that if you’re feeling a bit down this isn’t the TOTP Christmas show to lift your spirits. Luckily Baccara jolly things up with Yes Sir, I Can Boogie.

We close with the UK No 1 – Wings and Mull of Kintyre. Paul, Linda and Denny were already booked for The Mike Yarwood Show, so appear here in video form (complete with an unconvicting grassy knoll, plenty of mist and the Campbeltown Pipe Band walking through the shot at exactly the right time).

Would things cheer up for the Boxing Day show? Give me a few days and I’ll let you know. 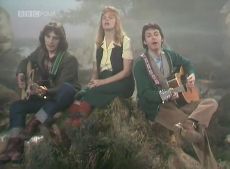 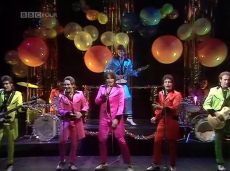