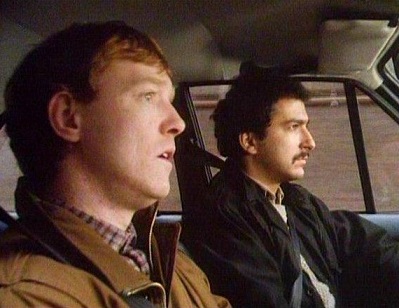 Famy’s inexperience is demonstrated at various points throughout the serial. McCoy is appalled to discover that he doesn’t have a plan to kill Sokarev – Famy has to weakly admit that the others (now dead) had the plan – and he further complicates matters by killing a woman who was rifling through his possessions at the flat where he and McCoy were holed up.

This means they’re on the run – which delights Jones, as he believes this leaves them in no shape to make the hit. Jimmy isn’t convinced and Jones quickly picks up on the vibe that Jimmy’s hoping that they’ll attack anyway. “You want to be in work, cheering them on. That makes me sick.” For Jimmy, the thrill of the chase (not to mention the kill) is all.

Although Rod Steiger’s performance can be florid at times, he still manages to throw in some subtle touches. One occurs as he prepares to say goodbye to his wife, prior to flying to London (she’s been forbidden from traveling with him). As they embrace, his eyes dart around in a worried fashion, but he manages to put on a brave face as they pull apart.

We see Norah’stifling home-life, complete with a father (played by Hubert Rees) who reacts to the news of Famy’s murder of the girl by muttering that the killer should be strung up. Of course, neither he or Norah’s mother realise that their daughter’s boyfriend is involved. But although Norah now knows what sort of man McCoy is, her love for him overrides every other consideration. But does he have any feelings for the girl, or is he simply using her?

The difference between Famy and McCoy – the one who’s prepared to give up his life for the struggle he believes in and the other who has no interest in a suicide mission – is restated. Famy tells him that “because my people have suffered, are suffering now, they trust me, for what I will do for them. In my country, the martyrs of our movement are honoured”. McCoy responds by telling him to shut up, proving that the ideological gulf between them is too wide to be breached. But while McCoy doesn’t share Famy’s hope for a glorious martyrdom, he does seem to have some sympathy for him.

Whilat a modern terrorist would probably plant a bomb, Famy’s eventual plan is much more old school – a rifle through the window and, hopefully, a clear shot at the podium where Sokarev is speaking. It’s possible to see the ease with which Famy and McCoy breach the elaborate security procedures set up to protect Sokarev as a weakness of the story or it could be deliberate.

Windows from the lecture room are accessible from the street outside, but although the street is cordoned off no thought seems to have been given to positioning substantial numbers of police or security officers outside these very vulnerable spots. Jones suggests it’s due to lack of resources, but that seems strange given the number of officers deployed elsewhere.

So the pair are able to run across the road and – as McCoy gives him a leg up – Famy breaks the glass in the window and takes aim at Sokarev. His lack of experience is highlighted again as he fires off multiple shots but isn’t able to hit the target. In desperation he throws a grenade in, which is leapt on by Mackiewicz.

Mackiewicz therefore protects both Sokarev and the others, but at the cost of his own life. It’s a chilling moment which brings home the point that often a bodyguard’s job is to take the bullet (or grenade) intended for the person they’ve been charged to protect.

With McCoy now injured from a brief gun battle with one of the security officers outside, he and Famy make their escape. Once more Famy’s inadequacies are displayed when he admits he can’t drive a car – forcing the badly injured McCoy to take the wheel as Jimmy follows close behind.