Skip to content
HomeH.G. Wells’ Invisible Man – Behind the Mask 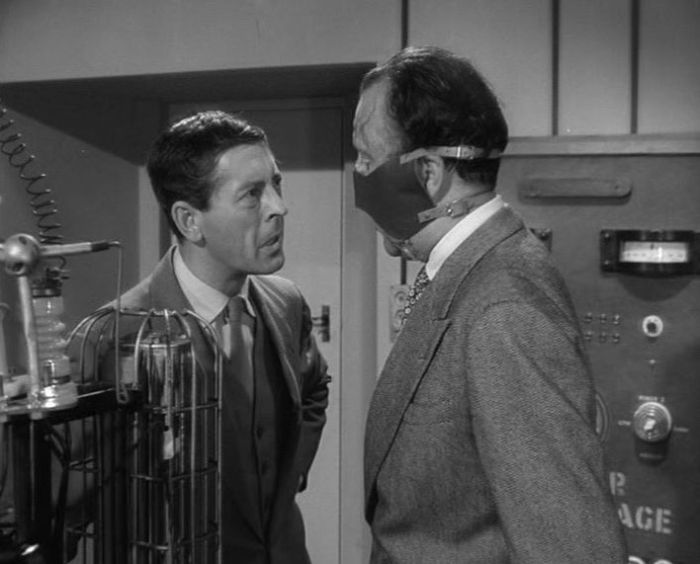 Brady is abducted and brought before Raphael Constantine (Dennis Price).  Constantine is a millionaire who’s surrounded himself with beautiful objects, but he tells Brady that this doesn’t negate the pain he feels (Constantine is horribly disfigured and has to wear a mask at all times).  He wishes to become invisible so that he no longer has to look at his ravaged visage and since he knows that Brady needs a human guinea pig for his continuing experiments it seems like the obvious solution.  Brady is initially unsure but is won around by Constantine’s arguments, although there’s more to this man than meets the eye ….

Behind the Mask opens with the Invisible Man having a shave, being watched by Sally.  This is a nicely mounted effects scene, although since they discuss how Brady’s experiments are floundering for the lack of a human subject, it quickly becomes obvious that it was no casual chat.

Price was a heavyweight guest star.  Probably best known for the classic 1949 Ealing film Kind Hearts and Coronets, his film career was still buoyant at the time.  He’d already appeared alongside Peter Sellers in The Naked Truth (1957) and would shortly do so again in another memorable British film, I’m All Right Jack (1959).  With his face partially hidden, Price had to fall back on his voice to convey Constantine’s full character, but since he had such a deep and expressive vocal range this was no problem.

Constantine’s monologue, where he pleads for Brady’s help, is one of the highlights of the episode, thanks to Price’s performance.  “To think that no-one, not even I, would ever again have to look on this mangled nightmare of a face. There’s nothing in the world I wouldn’t give for such a favour.”

If the script by Leslie Arliss and Stanley Mann has a flaw then it’s the early reveal that Constantine hasn’t been exactly honest with Brady.  He wants to become invisible so that he can kill Domecq – a visiting foreign dignitary whom he blames for his disfigurement.  A pity this revelation wasn’t held back until later in the story.

Constantine has surrounded himself with fellow dissidents, such as Max (Edwin Richfield), all of whom share the same hatred for Domecq – although Max is wise enough to see that Constantine’s burning hatred might endanger them all.  Oddly, Max sports a heavy foreign accent whilst Constantine’s tones are cut-glass English.  If they both come from the same country then how is this so?

The question of Brady’s public profile also seems a little inconsistent.  In the previous story Colonel Warren referred to him as a government secret, but here it appears that his story is in the public domain – Brady himself admits to Constantine that his bandages are a bit of a giveaway.

With a lovely guest turn by Price and the always dependable Richfield offering decent support, Behind the Mask is an above average effort.  And for once, Brady’s invisibility doesn’t help him – when he tackles the baddies he’s knocked out rather easily, allowing Max to take his clothes and bandages in order to masquerade as him.  A wonder nobody thought to do this before, since it allows Max entry into the research base without the guards batting an eyelid!