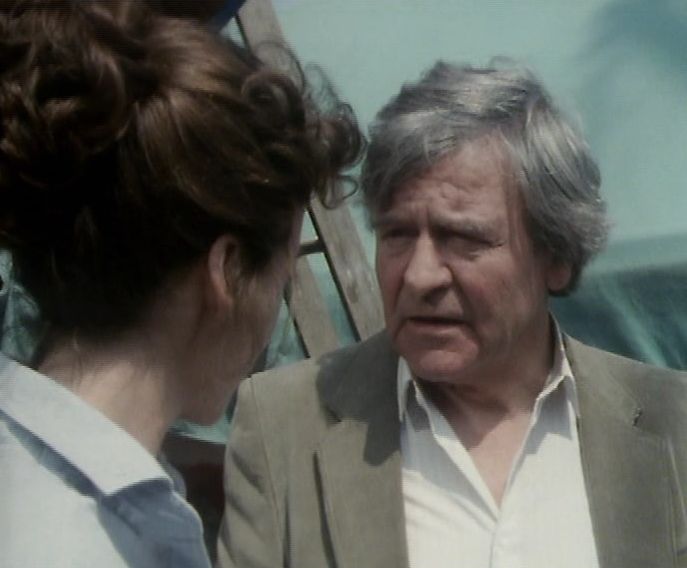 Tom is keen to go into partnership with Jack, but needs more capital – he has fifty thousand pounds, but needs another fifty thousand. Avril suggests he sells the Flying Fish.  Lynne’s not going to be pleased ….

Ken’s girlfriend, Dawn (Sally Farmiloe), feels a little threatened by Jan.  It’s always a little jarring to check out the status of less well-known actors who you don’t consider to be that old and find, like Sally, that they’ve passed away (back in 2014, aged sixty).

Ken’s sniffing around the Mermaid Yard, keen to snap it up if Jack goes bankrupt. This is the cue for another scene featuring a topless Ken lounging in bed, this time as he merrily plots away. At least Tom wears a pyjama top, much more restrained.

In many ways Jack is a horrible, selfish person but Glyn Owen’s ebullient performance means that you can’t help but side with him more often than not. He’s not keen to show Tom the company accounts, but Avril overrides him (“female Judas” he mutters).

So Tom is well aware how bad things are, but believes that his design skills and contacts will help to turn things round. As Jack is used to doing things his way, it’s plain that he’s not going to react well when someone else starts to tell him what to do. Since Avril is also a shareholder, her casting vote could prove be crucial in the future ….

The return of Abby from a posh Swiss finishing school is an episode highlight.  If I was Polly and Gerald I’d ask for my money back, as poor Abby isn’t really the finished article.  Possibly it’s not surprising, since Polly is as far from a nurturing mother as you could possibly expect whilst Gerald (when he finally makes an appearance) is clearly fond of Abby, but treats her with an air of absent-minded kindness, rather like one would deal with a family pet.  So Abby’s down in the dumps and will remain so for some considerable time.

Mother and daughter exist in self-contained vacuums. Polly wants Abby to make an effort and fit in with the glittering Tarrant social set, whilst Abby can’t think of anything she’d like less.

Lynne learns that her father and Avril have been taking quiet walks together.  She displays her disapproval by having a good pout (Lynne is a champion pouter, it must be said).

The first episode had seeded the notion that Avril’s heart had been broken by a relationship which ended badly.  No more information was supplied at that time, but a further piece of the puzzle is put into place here, as she contacts “someone” to see if they can help to sell the Flying Fish.  Keep an eye on this plotline.

Leo’s something of a contradiction.  He wants to save the environment, but has no qualms in taking a job at a petrol station.  If Tom (and later on Jan) are positioned as ideals of the Thatcherite Eighties – thrusting entrepreneurs – then maybe we can take Leo to be a warning about what might happen to those who leave school with poor qualifications (they end up in a dead-end job).  Or I may be seeing patterns that don’t exist, which is probably more likely.

Tom breaks the news that he wants to buy into the Mermaid yard. Jan’s not pleased but Tom, as always, goes his own way (cue an overdose of honking saxphones on the soundtrack, an odd musical choice).