Skip to content
HomeHowards’ Way – Series One, Episode One 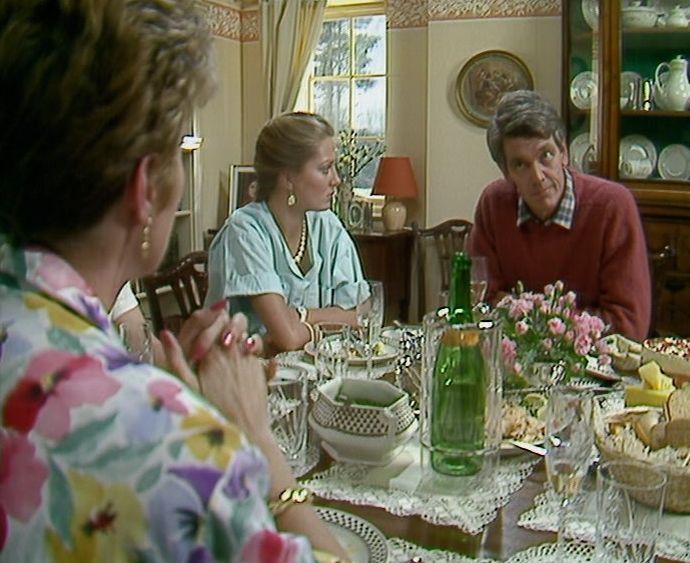 Tom’s boat – the Flying Fish – wins the Commodores Cup. The whole family are delighted but their joy is pretty short-lived as Tom drops a bombshell. He’s been made redundant ….

The extent of the Howard’s victory feast (including lashings of champagne) is an obvious pointer that they’re well off – but for how much longer?  It’s hard to feel too sorry for them though (Boys from the Blackstuff this isn’t). Perhaps they could sell a few paintings (unless they’re all reproductions) or even the house and then downsize.

It’s interesting to see how the others process this news. Jan feels betrayed that Tom didn’t tell her earlier and then reacts with horror when he raises the possibility of a job overseas. How could she leave Tarrant and her friends and family? Jan doesn’t come over very well here I’m afraid, as she appears to be completely self-centered.

Maybe it runs in the family as Lynne is quite similar. Although she finds the news upsetting, as long as she can sail the Flying Fish she’ll be quite happy. Uh oh …

Meanwhile Leo decides that he doesn’t want to go to university and would much sooner get a job instead. Edward Highmore’s performance is often as wooden as Jack Rolfe’s beloved boats, but since Leo was initally written as somewhat gauche, it’s not entirely his fault.

We also meet Jack and Avril. Jack’s aware that the Mermaid Yard is in deep financial trouble, but Miwcawber-like simply assumes that something will turn up. Avril, desperately trying to dig her father out of his financial mess, finds it hard to be so calm.

Jack needs a hundred thousand pounds to keep the yard afloat, Tom has his redundancy money. It’s a perfect solution, at least to Jack. Avril’s appalled – how can they ask him to risk all his money in a business that still may go bust?

Our first sight of Ken Masters is a hoot. Jan rings him up to arrange a meeting (she already works for him two days a week and hopes he’ll agree to her going full time). He’s in bed (bare-chested, medallion on display) with a shapely blonde by his side. He tells his blonde companion not to worry, Jan Howard’s no competion – she’s just a housewife. How wrong can one man be.

We learn that Avril has a broken heart (she cuts a folorn figure, lying all alone in her bed in a rather attractive pair of pyjamas) but perks up when she runs into Tom for the first time in years. Meanwhile, Ken is clearly interested in Jan. It’s not hard to guess the direction the series will go in, but there’s still some unexpected twists and turns ahead ….