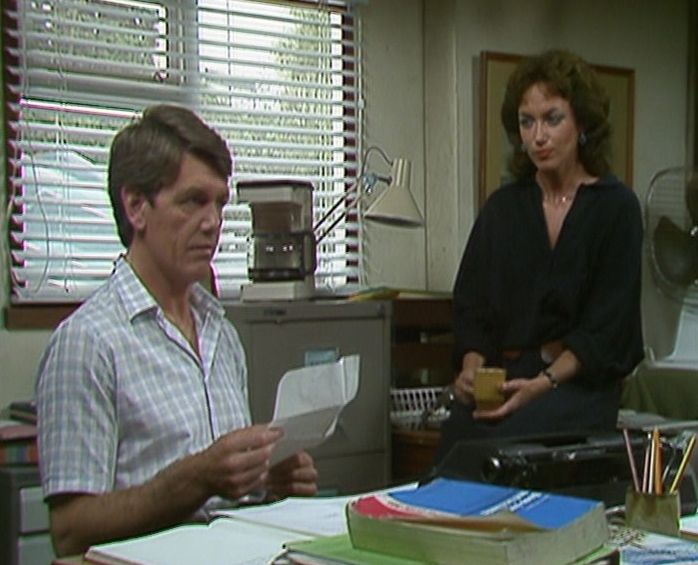 Shellet comes calling on the Urqhuarts.  Polly doesn’t exactly take to him, telling Gerald that “there’s a sort of person” to see him.  Shellet needs money for expenses and he also seems deprived in other areas (mentioning to Polly that it gets very lonely when he’s all alone in his hotel room).  Polly might have an eye for just about anything in trousers, but I’ve a feeling that Shellet is a bridge too far, even for her.

Lynne’s glammed up for her evening meal with Charles whilst Ken calls on Jan.  He plainly feels threatened by Claude (or “that froggy dressmaker” as he calls him) and seems to be fretting about the business trip to Cannes that Jan and Claude will shortly be taking.  Far away from home, he no doubt envisages that Claude will take advantage of her in just the sort of way he’s not been able to do so far!

It’s a sunny day in Tarrant, something of a rarity.  This makes Charles and Lynne’s champagne and caviar seem even more intoxicating.  He learns that Lynne’s father is conducting an affair with Avril (uh oh) and then outlines his philosophy of living, which revolves around power and freedom.  “Power to act and freedom to choose.” They’ve hardly finished the meal when he casually mentions that he’d like to sleep with her – which is as good an example of power and freedom as you can get.

Abby decides she wants to keep the baby.  This seems to have cheered her up – for pretty much the first time ever she seems almost happy.

And then we go to Cannes, well sort of.  In later years the budget would actually stretch to foreign filming, but that wasn’t the case here.  So we have a brief montage of stock footage (people lounging on the beach, etc) before cutting to a pool obviously somewhere in England.  But they made a bit of an effort to suggest exotic climes by having two topless women walk past Claude and Jan’s table in a casual manner.  That was a tad unexpected I have to say, especially considering that the episode originally went out just before 8.00 pm on a Sunday evening.

Ken might be right to be wary of Claude, but at present it’s her business acumen he wants (Claude’s attempting to woo her away from Ken – suggesting instead that they set up business together).  I’m afraid his silly French accent is beginning to get on my nerves ….

And then Ken pops up in Cannes, casually offering to take Jan out to dinner.  And of course being Ken he appears at her hotel door with a rose in his teeth and a bottle of champagne in his hand.  After a decent meal (off-screen, which saved a bit more money) they return to Jan’s hotel room and you can probably guess what happened next.

When they meet up for breakfast the next morning, Ken demonstrates that he’s an unreconstructed Englishman abroad since he’s not willing to try any funny food (bacon and eggs is what he wants).  The arrival of Claude sets Ken’s antenna twitching, but he acts casually in only the way that Ken Masters can.

The highly recognisable Hubert Rees pops up as racehorse trainer Stephen Bettins.  Kate’s part of a racehorse syndicate (each owning a leg) but it seems clear that she’s going to struggle to pay her share.  It might have been these scenes which inspired Glaister to later develop Trainer, which unfortunately wasn’t the same sort of success that both The Brothers and Howards’ Way had been.

Polly’s made it quite plain to Abby (before she ran away from home of course) that she viewed her daughter as an extreme disappointment.  But not any more.  After opening her mail(!), Polly’s delighted to read a letter from an American student called Orin Hudson.  He and Abby were obviously close for a while (as Polly so charmingly puts it – “God knows what this boy sees in Abby but it all sounds very lovey-dovey”).  And since he’s a member of an incredibly wealthy American family, Polly sees it as her duty to reunite the two lovebirds.  This is mercenary Polly at her best.

Jack’s solicitor lays on the line exactly how serious things are.  If Shellet’s claim is successful then not only will Jack lose the yard, he’ll also forfeit his house.  Tom will lose everything too, as all the yard’s assets (including the new boat) will be Shellet’s.  That’s a suitably dramatic way to bring the episode to an end.

One thought on “Howards’ Way – Series One, Episode Eleven”