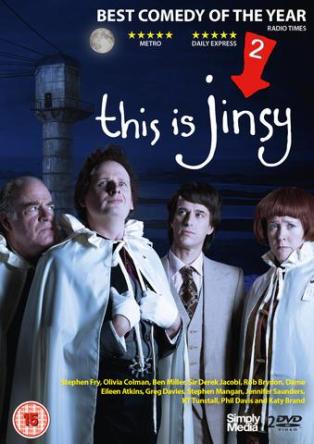 Welcome to the island of Jinsy (population 791).  From their vantage point in the Great Tower, the vain and incompetent Arbiter Maven (Justin Chubb) and his long-suffering assistant Sporrall (Chris Bran) attempt to keep island life running as smoothly as possible. This is made easier by a handy gadget – the tessellator. It’s a multi-function device which not only monitors the residents at all times, but also has a handy nozzle to download products, a slot to pay fines and a screen which displays adverts, entertainment and propaganda.

Although the pilot was broadcast on BBC3 in 2010, when This Is Jinsy was picked up as a series (two runs were broadcast in 2011 and 2014) it went to Sky Atlantic. The fact it was hidden away on a pay television channel could explain why the show never became mainstream, although even if it had appeared on a terrestrial channel it might just as easily have remained a cult curiosity.

Given its surreal nature, there were inevitable comparisons made to Monty Python, although The Prisoner seems a much closer fit (an isolated community under observation at all times, with a mysterious never-seen overlord – here it’s the Great He). It also has a touch of The League of Gentlemen, although This Is Jinsy’s world is warmer and far less cruel.

What impresses about the series is the list of top-drawer names who guest star across the run of episodes (continuing the trend set in series one). Particular highlights include Stephen Fry as Dr. Bevelspepp, who has to tangle with Maven’s wig when it develops a mind of its own, and Derek Jacobi as Robunce Barnatty, the oldest resident on the island. Elsewhere, Eileen Atkins, Rob Brydon, Olivia Coleman, Phil Davis and KT Tunstall are amongst the other familiar faces who pop up whilst Jennifer Saunders can be heard, but not seen, as the Voice of Miss Reason – dispensing words of wisdom from the depths of the tessellator.

Although each episode tells a self-contained story, the tessellator is a handy device which allows the narrative to be interrupted for public service messages or songs.  And it’s the songs which are This Is Jinsy’s trump card – annoyingly catchy, once they’ve embedded themselves into your brain it’s almost impossible to remove them. Below is one such example, Vegetable Tricks.

The songs and other skits allow Chubb and Bran to dress up (often as women) but occasionally they’ll step aside to let someone else take centre-stage. Rob Brydon, crooning Female Badger, is a definite highlight, as is the appearance of KT Tunstall (who also appeared in series one). In series two she entertains with the song Mittens.

Let’s take a quick trot through the eight episodes which make up series two.

Intelligent Hair finds Stephen Fry on fine form as Dr. Bevelspepp.  The central theme – a historic wig used in an arcane Arbiter’s ceremony takes on a life of its own and grows to enormous size – should give you a clue about precisely what sort of series this is.

Maven is anxious to get his accounts sorted in Acco! The problem is that all the island’s accountants have gone feral – little better than animals – and this tricky situation isn’t helped when he refers to them as Accos, a slang word which is also a terrible insult. Luckily Maven is able to strike a deal with the Chief Accountant (Ben Miller) but unluckily it involves the Chief Accountant’s daughter Berpetta (also played by Ben Miller).

Katy Brand guests in Double Duck as Madame Astrasline, a psychic who obtains her readings from a basketful of rats. When she foretells Maven’s assassination, he needs to find a dead-ringer to take his place (fortunately there’s one close at hand). Elsewhere, the tessellator keeps us up to date about a nasty outbreak of femininity in the lower parishes. But luckily for the male residents this can be rectified with a dose of Rob’s Burly Water (“now available in beefcake and butch”).

In Penny’s Pendant, Maven and Sporrall tangle with Miss Penny (Eileen Atkins), the island’s imposing etiquette teacher. Atkins is splendid as the sinister Miss Penny (her chat with Cecil, a giant mute rabbit, is another of those unique Jinsy moments).

Nightly Bye. The island celebrates the forbidden festival of Nacken – but Maven is kept in the dark about it. This episode is simply an excuse to have many more silly songs than usual, but that’s fine by me. Amongst the delights is Rob Brydon as Rex Camalbeeter, a man who likes nothing better than dressing up as a female badger and then singing about it.

In The Speckled Pom-Pom, Maven is convinced that a group of islanders are sending covert messages to each other, via ‘textile messaging’.  He has a ready-made suspect, Mr Lovely (Stephen Mangan), and encourages a reluctant Sporrall to assist him in his crusade. There’s another edition of Sandy’s choice (“a talent competition judged by a dog”). KT Tunstall joins in with a touching song all about mittens, but what will Sandy think of it? Will it be a “Woof” or an “Enoof”?

The population on Jinsy is strictly controlled, so when – in Population 791 – it exceeds the required number, Maven is ordered by The Great He to dispose of the island’s oldest resident, Robunce Barnatty (Derek Jacobi).

In the final episode, The Golden Woggle, Maven, after taking tea with a former Arbiter, Jenkins (Phil Davis) and his wife Joan (Olivia Coleman), is dismayed to learn that Jenkins never handed back the official woggle after his reign came to an end, meaning that all this time Maven has been making do with a make-shift one.  He vows to retrieve his rightful woggle from Jenkins, but he’ll have to brave Joan and an awkward parrot first.

Although This Is Jinsy doesn’t lack for star quality, series creators and writers Justin Chubb and Chris Bran more than hold their own.  The relationship between the pompous Maven and weary second-in-command Sporrall is a familiar sitcom one (think Mainwairing and Wilson in Dad’s Army) which works to good effect here.

Maven and Sporrall have two other regular characters – Trince (Geoffrey McGivern) and Soosan Noop (Alice Lowe) – to bounce off.   Trince is a dry academic, played to perfection by McGivern (the original Ford Prefect) whilst Soosan is the third member of a curious love triangle (she’s besotted with Maven, he ignores her, whilst Sporrall pines for her).  The likes of Greg Davies and Janine Duvitski in small but regular roles are further plusses, as is the strong cast of Jinsy Players who tackle different parts from show to show.

Originally released on DVD by Delta in 2014, This Is Jinsy – Series Two has been brought back into print by Simply Media.  It’s essentially the same as the previous edition (four episodes of around 23 minutes duration per disc, no subtitles, two of the briefest special features you’re ever likely to see and a short photo gallery) so if you have the Delta DVD there’s no particular reason to upgrade.  But if you don’t want to buy a second-hand copy of Delta’s OOP version, then this new pressing should be most welcome.

Possibly we’ve seen the last of the residents of Jinsy.  I hope not though and maybe this re-release might spark a little more interest in this unforgettable, idiosyncratic and very, very silly comedy gem.  Nightly Bye.

One thought on “This Is Jinsy – Series Two. Simply Media DVD Review”