Unusually, today Bernard gets an introduction at the top of the show (normally, we cut into his song when it’s already in full swing). The audience have clearly been primed to wave red cards at him whilst he’s in mid-croon (the reason for this is lost in the mists of time).

With a name like Aphrodite and the Grecian Kings you’re primed for something special – and they don’t disappoint. There’s three chaps – all visions in white – whilst a blond lady sings a song in Greek (at least to begin with). When she’s not singing she gyrates around in a fashion that I’m sure the males in the audience appreciated.

Are they being serious or is it a comedy act? I’d say the latter, but with some of the turns you get at the Wheeltappers you can never be sure. It’s a rum old opening that’s for sure – when this lady sings, nobody sleeps.

Magic’s up next, with Los Magicos taking to the stage. He’s dressed in a stunning white suit, complete with flares, whilst his female helper has a similar (if somewhat abbreviated) outfit. He’s a dove man – he makes the birds appear, then he makes them disappear. Scarves and more birds (for variety, an owl) are also pulled out of a box. Fair to say that these are only modest thrills.

After the fairly average entertainment derived from the first two acts, things pick up with the arrival of the Crickets. Although a number of new members had joined during the 1960’s, the presence of Jerry Allison was a direct link to Buddy Holly which therefore makes them slightly more than just another covers band. It’s only a short spot – two songs – but it’s pretty decent.

The conceit of the Grumbleweeds’ act is that their stage clothes haven’t turned up, so they’ve been forced to use whatever they can find backstage. This includes a Musketeers costume, what seems at first to be a football kit (but turns out to be a dress), a nappy(!), a school uniform and a swimming costume. Their song routine – based on endless repetition – isn’t subtle but it’s funnier than many of the comedians who have graced the Wheeltapppers stage so far.

Given that they clearly had some visual flair, it’s slightly surprising that they never really seemed to be at their best on television (their 1980’s ITV series was only fitfully amusing). Instead it was radio where they made their mark.

The Wheeltappers, no doubt reflecting the reality of clubland, tended to feature a fair few acts who had been famous once upon a time but who had then faded into obscurity. Yana is an excellent example of this. At the height of her fame – in the late 1950’s – she had her own BBC television show and also crossed over to America, appearing with both Ed Sullivan and Bob Hope, but by the following decade she had become yesterday’s woman.

So by 1974, possibly only the older members of the audience (which, luckily, tended to be most of them) would have remembered her. Yana’s style was to breathe out a song (like Move Over Darling) whilst fondling and kissing various men in the audience. She also invites one lucky chap onstage, where he gets right into the swing of things (jigging in time to the music like nobody’s business). Possibly he was a plant, but I like to think he was simply an ordinary punter who had one drink too many. This is an odd little sequence, but one that also perfectly sums up the Wheeltappers experience.

Another blast from the past – Johnnie Ray – is today’s top of the bill. Cited by Tony Bennett as being the true father of rock ‘n’ roll, he rattles through a few familiar songs (most notably his UK number one, Just Walking in the Rain). It’s a slightly wonky listen, mainly because the regular house band aren’t the tightest, but Ray’s star quality – like Yana, he works the crowd well – shines through. 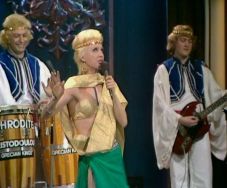 Aphrodite and the Grecian Kings 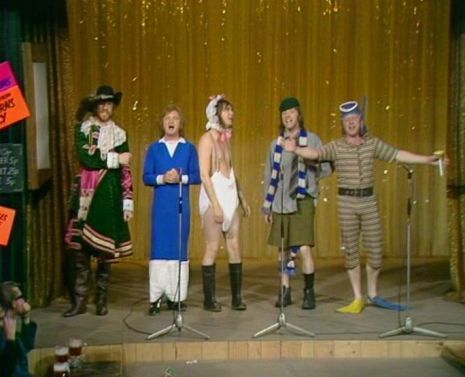