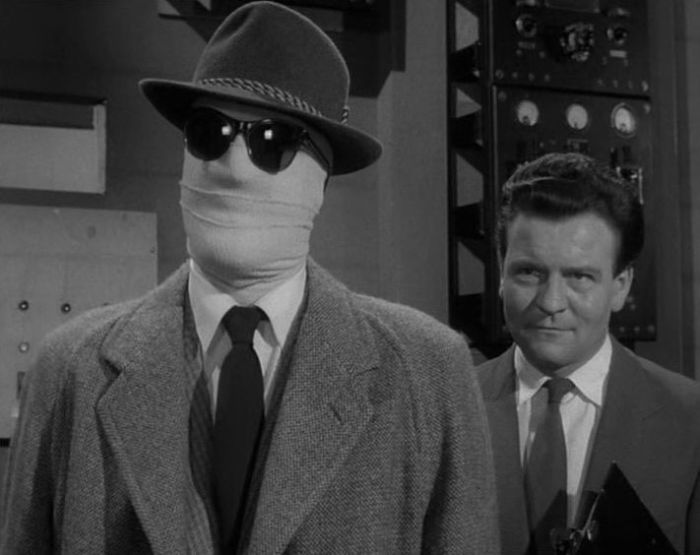 Ronald Smith’s (Glyn Owen) heavy gambling debts make him susceptible to an approach from Reitter (Russell  Waters).  Smith is the transport officer responsible for the movement of a new rocket (due in Scotland for further tests) and when his information allows it to be stolen en-route, the Invisible Man sets off in pursuit ….

The first few minutes sees Smith sweating at the casino table, losing heavily at baccarat.  A favourite game of James Bond (it was featured heavily in Ian Fleming’s debut novel Casino Royale) possibly it was felt that the rules were already well-known, since they’re not explained here  Smith draws an eight and is understandably pretty confident (only a nine could beat it) although his later downcast expression confirms that’s exactly what must have happened.  An uncredited John Standing makes a brief appearance as the croupier.

Smith then decides to throw himself off a nearby bridge, but the coolly seductive Reitter stops him.  We never learn precisely who Reitter works for (an unfriendly foreign power no doubt) but he’s quickly able to convince Smith that his debts could be cleared if he divulges the following information – the time and route that the rocket will take.  Reitter insists that no suspicion will fall on Smith, although as we’ll see, Smith rather betrays himself ….

The rocket test scenes in London with Brady, Professor Howard (Robert Brown) and (somewhat oddly) Smith are very evocative of the era.  The surroundings are rather tatty and makeshift (old-fashioned telephones and a general feeling of decay) but the message seems to be that British ingenuity has made up for a lack of money and facilities.

There’s also a delightful later scene when Brady and Howard demonstrate the rocket to a number of Military and Whitehall bigwigs. None of them speak, so they were either deeply impressed by the brilliance of the invention or were non-speaking extras (the latter I guess).  Keep an eye on the gentleman on the far right, who throughout the demonstration wears an expression of shock.  I assume he was aiming for an engrossed countenance, but didn’t quite manage it.

Sally pops up for a single scene in which she and Brady are attempting to knock down a series of wooden skittles.  Brady, being invisible, cheats terribly and when Sally points this out he appears to give her an invisible smack on her bottom.  Which wasn’t fair or friendly, poor Sally (and Deborah Watling didn’t even merit a credit for this appearance, which seems a little odd).

There’s one major plot-hole with the story.  Despite the fact that Smith’s been told he only has to pass on the transport details of the rocket, he decides to advance its departure time, thereby bringing intense suspicion on himself.  Had he not done this then the baddies would probably have succeeded.

I love the fact that the lorry carrying the rocket is so poorly guarded (one single motorbike rider!).  Mmm, given that we’ve been told how terrible it would be if the rocket fell into the wrong hands, I’ve a feeling that a touch more protection would have been advisable.

The second half of the episode follows a predictable route – Brady tracks the villains down, gives them an invisible beating and wraps everything up by the time the end-credits roll.  But whilst this part is less compelling, I’ve still got a lot of time for The Rocket.  Glyn Owen doesn’t have a great deal to do, but he still manages to sketch Smith’s character very effectively (Smith’s conscience later kicks in and he ends up redeeming himself).  It’s also nice to see Robert Brown (later to star as M in the 1980’s Bond films) although his role is also pretty slight.

Some nice location work, decent actors and a good punch-up.  There are worse ways to spend twenty-five minutes.