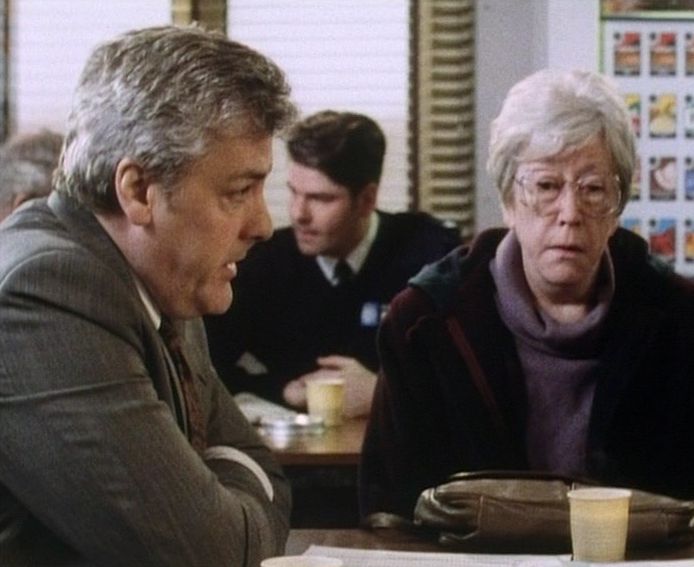 Three homeless people (one of them played by the highly recognisable Andy Devine – who would later appear as Shadrach in Emmerdale) are poisoned after a seemingly good Samaritan offers them a drink of champagne laced with prescription tranquillisers.

Temple’s mildly curious, but doesn’t regard it as much more than a sick joke.  It’s a sign of the times that the office only seems to have one computer and – as the victims use it to put together an identikit picture of their well-heeled poisoner – Temple gripes about the expense.  “Have you any idea how much that computer takes out of my budget? It’d be cheaper to hire Walt Disney”.

Temple’s given some good lines in this one.  A few minutes later he asks Becky and Warren exactly what they’re going to do.  “Put out an All Points Alert for Burlington Bertie?”  That’s a rather obscure reference which – back in the pre-internet nineties – would probably have perplexed a section of the audience.

Elsewhere, Bruce, Lew, Marty and Ron go in mob-handed to tackle Gibbs (Peter Jonfield), who appears to have a shop full of stolen goods – although annoyingly none of his stock appears to be on the stolen property register.  By racially taunting Bruce, Gibbs successfully manages to get under his skin – making him all the keener to nail him, although it also might serve to make him more reckless.

This subplot somewhat moves into the background once it’s discovered that Jackson (Devine) has been attacked again, only this time he’s dead.  Is it connected to the previous poisoning?  The descriptions of the suspects indicate not and the fact that one of them had red hair gives Marty the chance for a droll comeback.  “That’s handy, I’ve been looking for an excuse to arrest Mick Hucknall”.

They trawl the drug rehabilitation centres for clues, which sees Lew and Tony take diametrically opposing views on their usefulness.  It’s no surprise that the humanitarian Tony believes they help to prevent crime as well as getting people back on the straight and narrow whilst the more cynical Lew begrudges the fact that his taxes are used on such people.

Bruce has been operating on a tight-fuse for a while.  And after Warren makes an offhand remark (wondering if his obsessive nature is a family trait) Bruce takes it as a dig directed at his father and fisticuffs ensue.  This creates a nice sense of tension which, together with Lew’s off-kilter personality, means that the team have never been more dysfunctional.

Another soap favourite, Maggie Jones (Blance Hunt from Coronation Street) makes a brief appearance as Joan Palmer.  Bruce wants Joan to identify the property from Gibbs’ shop as hers, but when she’s unable to do so Bruce is once again frustrated.  Emma Bird, who also would have been a familiar face at the time (she’d played Maxine during the 1992/93 run of Casualty) makes an impression as Nikki, another of the poisoned down and outs.  She’s an actor who seems to have slipped off the radar, as her last screen credit (an episode of Liverpool 1) was all the way back in 1999.  And the eagle-eyed might spot a young Benedict Wong making a brief appearance as a wages clerk.

The team arrest a suspect, Eamon Timmer (Simon Tyrell), for Jackson’s murder.  He’s very talkative before the tape starts rolling (“I killed Jackson Hanley! I did it. And I’ll kill every tosser in this room”) but doesn’t say a word after the red light goes on.

Although none of the plots really engage, the interactions between the team (especially the continually wise-cracking Marty) helps to keep the interest levels up.  The final scene is especially intriguing. After Becky’s attempt to console Warren (still smarting over the end of his relationship with Lucy) comes to nothing, she winds up in bed with Lew.  Her post-coital expression makes it plain that she realises what a terrible mistake it was ….