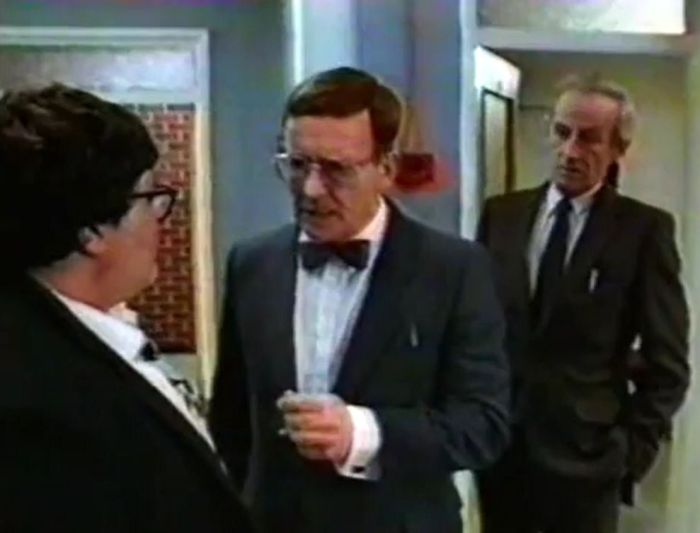 Zammo’s on the scrounge again and once more Roland is his hapless victim.  Given that Roland seems to be the only person in Grange Hill aware that Zammo’s got a drugs problem, it’s slightly odd that Zammo decides to target him yet again.  This is either another case of slightly wonky plotting (given the length of time this storyline has been running I’d have expected others – especially Jackie and Kevin – to have twigged that something’s wrong with Zammo by now) or it’s an intentional move – confirming that junkies aren’t the most forward thinking of people.

It’s late at night and Roland is home alone, frantically swotting for the next day’s French oral exam.  Zammo spins him a highly suspect story about a mysterious man down the arcade who owes him a tenner.  Naturally, this involves Roland giving Zammo another ten pound note so he can change the mystery man’s twenty.  Given all Roland knows, he’s either incredibly stupid or incredibly trusting (I’d favour the latter over the former).

There’s a nice touch of continuity as we see a polaroid picture of Fabienne on Roland’s bedside cabinet (a reminder why this French exam is so important to him).  That’s what makes Zammo’s next move so shocking – when Roland goes out of the room to get the ten pound note, Zammo pockets Roland’s bedside clock.  It may not be worth much, but it’ll fetch him a few more pounds.

Remember what I said about Roland’s level of intelligence?  Hmm, I take it back.  Surely he would have realised that his bedside clock was missing?  Most people would surely use it regularly to check the time.  So this part of the plot doesn’t quite hold water – unless you believe that Roland, exhausted from his revision, fell into a deep sleep shortly after Zammo left.  That might just work ….

The upshot is that the next day Roland is late for his exam and if he misses it then all his hopes will be dashed.  This is where we see, for once, the caring side of Mr Bronson.  Pacing up and down whilst checking his pocket watch (a nice little detail – Mr Bronson would be exactly the sort of character to have such an old-fashioned timepiece) he’s clearly upset that his star pupil hasn’t shown up.  Compare and contrast to the way he’s abused Ant (sometimes unfairly) this year and it shows that deep down he does have a heart.  He’s obviously a teacher who has favourites though (a good teacher would treat everybody the same).

It’s obviously intentional that in the same episode where we see Mr Bronson give Roland a helping hand, we also see his more unrelenting side.  Mrs McClusky, Mr Baxter, together with Ant and his parents, are having a friendly chat – at least until Mr Bronson turns up and then the atmosphere changes in an instant.

Given that Mrs McClusky and Mr Baxter have both gently suggested previously to Mr Bronson that he’s waged something of a vendetta against Ant, it’s notable that they don’t mention this to Ant’s parents. A case of them closing ranks with Mr Bronson, even if they don’t entirely agree with him?

It’s a surprise that Zammo turns up for his exam.  It’s not a surprise that he’s totally mute throughout though.  Maybe he just made it to school that day in order to steal the video recorder?  How he managed to waltz out of school with nobody noticing he had it tucked under his arm is a mystery though.  And it’s odd that we don’t actually see Zammo steal it – possibly there was a general feeling this year that they had to be extra careful when depicting Zammo’s criminal activities, but on more than one occasion we’re told and not shown (which never feels entirely satisfactory).

This episode provides us with a rare opportunity to see the fifth formers together.  The likes of Banksie, Kevin and Julie – all rather sidelined this year – are given a few scenes.  Earlier in the year we learnt that Julie fancied Kevin, is that the reason why they’re revising together?  Later, Banskie continues his rehabilitation by lending Roland some money (after learning that Zammo’s left him penniless).

We finally learn why Miss Partridge has to leave early every day.  She has a young son ensconced in a nursery and, as a single parent, has to pick him up on the dot each afternoon.  Today there wouldn’t be anything remarkable in this, but some thirty years ago things weren’t quite so clear cut.

The police bring the video recorder back.  They’re looking for Kevin (since Zammo used his name when selling the recorder).  But once they track him down they know that he’s not the one – since the suspect was Caucasian.  It hardly seems credible that Mr Kennedy wouldn’t know what Caucasian meant, so why not just say white in the first place?

Roland’s also on hand and he’s the one who spills the beans about Zammo.  Of course, we don’t actually know at this point that Zammo stole the video (although it seems more than likely) but the incident serves as the trigger for him to finally reveal what he knows.  And once again we cut away at the point just before Roland tells Kevin and Mr Kennedy that Zammo’s a junkie.  That the series is continually dodging dramatic moments like this is more than a little puzzling.

Jackie visits Zammo’s flat (today it’s a standard studio set, rather than the real location used earlier on) and finds Mrs McGuire at the end of her tether.  She knows that something’s wrong but has either not considered the possibility that drugs are involved or is in a state of denial.  When the police call, Jackie meekly leaves (this seems a little unlikely, surely she’d have hung around in the passage and attempted to listen in).

But if we’re denied another dramatic story beat – Jackie learning that Zammo’s an addict – at least we’re present when Mrs McGuire is told.  This gives us another strong episode closer as she cups her hands around Zammo’s face and pleads with him to tell her it’s not true ….