This episode pretty much picks up where the previous one finished, so we see Barracuda pulling into port with an ambulance crew waiting for Jack. Although the incidental music is still set on “sinister and anxious” at least he’s awake and is his usual cantankerous self (which is a good sign). “Where are you guys taking me? I’m not going to St Hilda’s. I had a wisdom tooth out there”.  Three guesses which hospital he ends up at …

I like the way that Tom later insists that Leo should stay with Jack at the hospital (Tom never seems to stop and consider that maybe he should stay). Leo is slightly whiny (“why me?”) but you know that since he’s such a good natured-soul he’ll be happy to do so. And so he does.

The way that the episode deals with Avril’s reaction to the news is very interesting. Tom calls her (she’s at Jan’s house – helping to investigate the saga of the stolen designs) and when she takes the receiver we see her face suddenly fall. But then we cut to Tom (“oh, no, no, Avril, it’s all right”) and we don’t cut back to Avril again.

What’s very notable is that after this moment Avril doesn’t mention her father for the remainder of the episode. All of her scenes are business related – jousting with Charles and Gerald, wining and dining new recruit Sarah – meaning that her father seems to be low on her list of priorities. Harsh? Maybe, but whilst we’re told that she does visit Jack in hospital, we don’t actually see it (whereas we are witness to Kate’s visit – where she dishes out a typical dollop of good old-fashioned common sense, much to Jack’s disgust!)

This foregrounding of Avril-as-businesswoman may have been intentional or it could just be the way the scripting turned out – but it does seem odd that we never learn what she thinks about her father’s hospitalisation (even Polly – hardly Jack’s biggest fan – is given a moment to react with dismay at the news).

Jack, you’ll be glad to hear, isn’t too bad at all. He does have an ulcer, but as long as he lays off the booze, cigars and adopts a healthy diet then all will be well. Yes, I can see three things wrong with that picture too.

Dr Bishop (Alexandra Mathie) is something of a tarter, but the fact she’s a woman (something which Jack can’t help but blurt out) seems to stun him the most. Has he not visited many hospitals recently? When she quizzes him about his habits, can you guess what he says when she asks him about drink?

“Oh that’s very kind of you, I’ll have a small scotch please”.

Predictable, yes. But it still raised a smile.

I can’t help but be intrigued by the fact that Alexandra Mathie’s fairly limited cv includes the film Paper Mask (set in a hospital) and television series such as Doctors, Casualty and Coronation Street (where she played a doctor). Was it just coincidence that she seemed to so often play roles which were medically based?

Abby and Polly are continuing to get on well, something which is slightly surprising (I’d have thought by now they’d have regressed to their usual habits). The question of William does slightly divide them, but once again Polly’s attempting to help, as seen when she later visits Charles and asks if he can intercede. This he’s disinclined to do – whatever else he thinks of his father, he knows that he’s more than capable of wresting William away from the Hudsons.  Although he does advise that if William arrives in the UK it would be advisable to prise him out of Sir Edward’s clutches. Abby doesn’t seem to have appreciated that Sir Edward may have an agenda for his grandson which is different from hers.

Things are not going well for Ken. He asks Sir John if the bank will front for him on Guernsey since he can’t apply for trading status directly. As he bitterly admits, he doesn’t wear the old school tie (an ironic comment, especially as he wasn’t allowed into Sir John’s club straightaway since he wasn’t wearing a tie). Ken’s status as an outsider – barely tolerated but never accepted by those he wishes to emulate – is never clearer than in this episode.

There are some fine cardigans on display in this episode. One is worn by John Reddings (Stephen Greif). Yay, Travis Mk1! He may lack the eyepatch, artificial hand and psychopathic tendencies of Travis, but Reddings is still dangerous in his own way.

Ken employs him to recover Jan’s stolen templates and we learn here that it was Ken who paid for them to be pinched in the first place. The rotter. But he’d intended that the designs would be destroyed, not taken to Taiwan and copied, which suggests that Ken wanted to ruin Jan a little, but not too much.  That sort of makes sense I guess (since he wanted to buy back into her company).

Reddings does the job, but at a price. He has a tape-recording of Ken’s admission he organised the theft and is unabashed at requesting hush money. A pity that Reddings doesn’t reappear, since an actor as good as Stephen Greif shouldn’t be wasted with just a handful of scenes.

Here’s something I never thought I’d see – Tom and Charles all pally. They too are sporting nice cardigans as they head off to Charles’ tennis court for a quick game. Charles is still attempting to woo Tom to accept the design job so it’s not entirely a pleasure trip, but the fact that Tom accepted shows that he’s mellowed (or that despite himself he’s interested in the offer). We only see the first point of the game – Charles thunders an ace past Tom – but it may serve not only as an indication of who won, but also Charles’ desire to win everything at any cost.

We don’t see much of Sir Edward. Apart from leaving yet another plaintive message on Jan’s answering machine, he doesn’t pop up until the last ten minutes or so. Am I the only one to find his constant endearments (“hello, my love”) slightly intimidating? The man’s not taking Jan’s “no I won’t marry you” as an answer, so has bought her a flashy sports car as a blatant bribe. Jan initially pulls a face (she’s standing by the sink, filling the kettle whilst he’s waggling the car keys behind her back!) but we don’t see her categorically refuse the present ….

Michael sets off in the Barracuda – one of a score of boats making a solo transatlantic crossing.

Sarah breaks the news to Ken that she’s leaving to take a plumb job at Relton. He doesn’t take it well. “That bitch doesn’t let the grass grow under her feet, does she?” he mutters, referring to Avril. And he doesn’t seem to rate Sarah herself any higher. “What the hell does Charles Frere want with deadwood like you?”

He then roughly prevents her from slapping him (holding firmly onto her arm) but although he’s physically stronger, it’s Sarah who seems to have won the business battle. He does tell her not to come crawling back to him for a job when Relton have no further use for her, but this just seems to be a case of Ken trying to keep his own spirits up. This year hasn’t been a good one for Ken, will his luck change anytime soon? 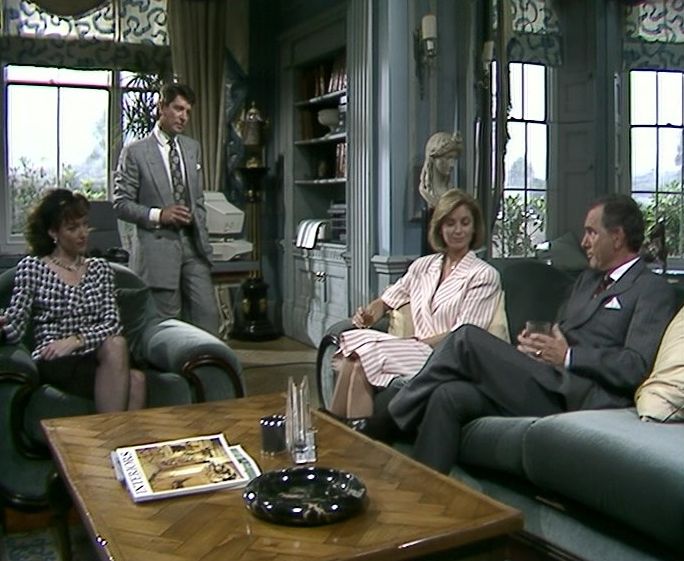