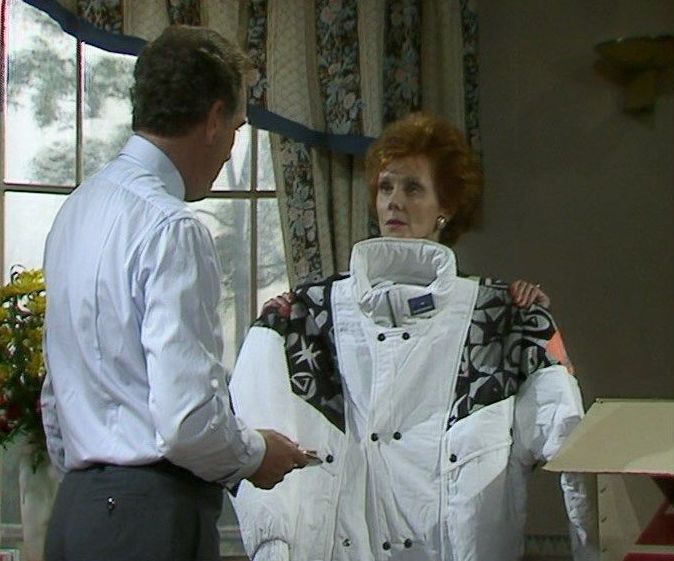 The crane operator was clearly working overtime this episode, as there’s a couple of nice swooping shots – at the Mermaid Yard and over at Polly and Gerald’s house – both of which allows the action to pause for a second.

Tom, Emma and Bill decide – in Jack’s absence – to fit a new engine into Jack’s newly designed boat.  What will the typically fiery Jack make of this tinkering?  He’s aware of it, since he’s observing proceedings – with a telescope! – close by, but he seems remarkably mellow at present.

Meanwhile, Gerald is less than enthused to discover that his house is filled with boxes, many, many boxes.  It’s been a while since Polly and Gerald shared a decent comedy scene (last year their plotline was sombre, to say the least) so this makes for a welcome change.  Polly has decided to launch a new mail order line (German casual wear) under the Periplus banner.  Unfortunately she hasn’t mentioned this to Jan ….

Gerald’s patient reaction to this house invasion is a delight, as is his nonplussed reaction when Polly holds up a puffy jacket for his inspection.  A pity that Polly didn’t insist he try it on – that would have made a good scene even better.

That Polly has decided not to tell Jan, but then goes ahead with newspaper advertising is a little bizarre.  Surely this would mean that Jan would eventually find out anyway?  As it is, it’s Abby – of all people – who tips Jan off, which leaves her hurt and wounded.  Polly’s supposed to be her oldest friend, so how could she do this?  Everything’s set up for a confrontation next episode.

Tom and Jan’s relationship continues to intrigue.  They have another convivial lunch which sees Tom reject Jan’s cheque (she borrowed a hefty sum from him during Periplus’ recent business traumas).  Instead he asks if he can have shares in her company (since she owns a stake in the Mermaid it seems only fair).  And although Jan has jealously guarded control of her empire (it still irks her that Ken has a small shareholding and she blocked Polly’s attempt to grab a stake) she quickly and happily agrees.

I’m not quite sure what Jan’s feelings for Tom are (we know that she’s still very uncertain about Sir Edward’s proposal, so is she contemplating a reunion with her ex-husband?).  On the other hand, Tom’s status seems much more clear-cut.  He’s happy in his relationship with Emma (although maybe she’s not – more on that in a minute) with the result that he treats his ex-wife with indulgence and more like a sister than a former partner.

This is demonstrated after Jan shows him her new present from Sir Edward – the flashy sports car.  Tom jocularly tells her that “you need a bit of a talking-to, my girl” and is prepared to skip a meeting with Charles in order to do so.

Emma isn’t pleased when she later learns that Tom cancelled the meeting for a spot of quality time with Jan and is even less chuffed when he later asks her to step out of the office for a moment after Jan brings round the paperwork relating to his new shareholding in Periplus.  Tom seems not to display the slightest hint of jealousy about the relationship between Jan and Sir Edward, but Emma clearly finds it harder not be irked whenever Tom and Jan spend time together.

A more empathic man would understand this, but as we’ve seen so often, Tom – for all his good qualities – is somewhat lacking in this department.  The way he raises his eyebrows after Emma storms out of the office makes it plain that he doesn’t really understand that he’s treading on very thin ice at present.

Ken’s boat continues to sink and Leo is the next rat to leave it.  That’s a tad unfair of course, but Leo’s loyalties are definitely split.  He’s desperate to race in the world powerboat championship but if he stays at Leisure Cruise will he get the chance?

This is another of those plot oddities which creep up in HW from time to time.  It only seems like a few days ago when Leo raced a powerboat for the first time and now he’s good enough to contest the world championship?  Either the championship field is very small or he’s become very good very quickly.

But whilst he does have loyalty towards Ken, racing powerboats is now his life (apparently) so the chance of a guaranteed seat in the race if he goes to Relton is just too good an opportunity to pass up.  So he bids farewell to Ken in a scene which sees both of them raise their voices – nothing new for Ken of course, but it’s always nice to see a touch more animation from Leo.

Leo and Abby have minimal contact in this episode.  When she hears that Sarah paid him an evening visit (to discuss jumping ship to Relton) there was maybe just a twinge of jealousy from her, but Leo didn’t rise to the bait and both were prepared to laugh it off.

Charles dangles a carrot in front of Tom – a new yard, with much better facilities than the Mermaid.  With these resources behind him, the possibilities are endless – although Tom’s still convinced that, since it’s Charles, there must be a catch.

Elsewhere, Sir Edward continues to sniff around Jan (he’s taken to popping up in the least expected places and frightening the life out of her), the saga of William continues to rumble on, Michael Hanley’s doing rather well in the transatlantic race whilst Jack is doing less well at the bookies.  Surely by now he’s realised that he shouldn’t back his own hunches – instead he needs to rely on Kate’s tips.

Jack’s return to the Mermaid doesn’t quite go the way he planned.  The others have completed the Orkadian in his absence, but there’s just one question – where is it?  Bill points “there she is” as he, Tom and Jack watch it sailing away.  This leaves Glyn Owen with a classic end of episode line.  “Somebody’s nicked my bloody boat!” 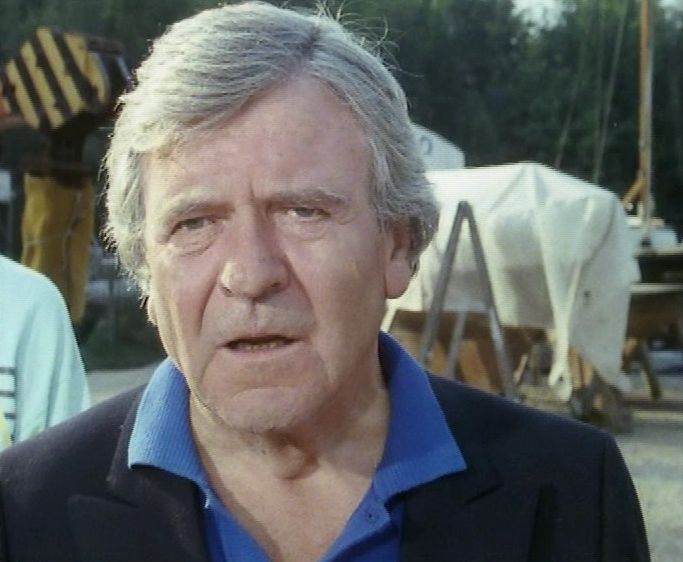