Skip to content
HomeDoctor Who – An Unearthly Child. Part Three – The Forest of Fear 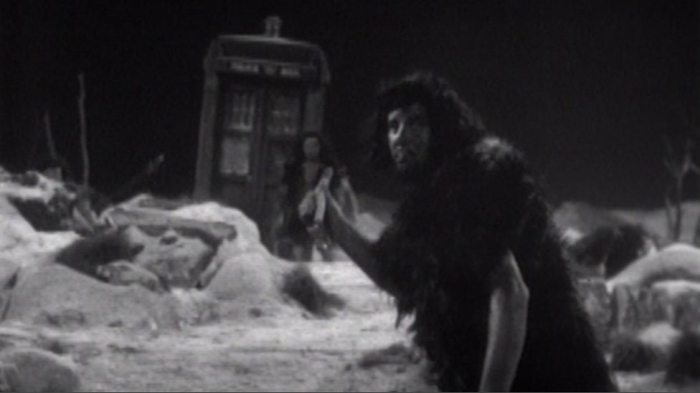 The early years of Doctor Who have some fine examples of caption acting. As the episode and writers credits were superimposed over the opening scene it often called for an actor to freeze in a suitably impressive way. Here, we see Eileen Way’s outstretched arm, holding Kal’s knife, remaining rock-solid for five seconds or so. There are plenty of others to look out for (The Firemaker is another good-un).

Inside the Cave of Skulls the Doctor is offering Barbara some moral support (“Fear makes companions of all of us”) whilst also offering more practical advice – he recommends that they all take it in turns to free Ian, since he’s the strongest and may have to defend them.

Another example of the lack of editing that was available at the time comes when the Old Mother breaks into the Cave. Either Carole Ann Ford was cued too early or the vision-mixer cut too soon, but there’s a pause of a few seconds before Eileen Way comes into view. A few years later this would have been easily tightened up, but given the restrictions on tape editing at the time it had to remain.

Old Mother sets them free and the four time-travellers make their way back to the TARDIS through the forest of fear. It’s very noticeable how dirty and disheveled they are – something we rarely see in the years to come – which helps to add an extra level of reality to their situation. This is no casual stroll back to freedom, there’s a sense of desperation and hysteria about their escape.

And the worst affected is Barbara – she’ll later become such a sold reassuring presence that it’s disturbing to see her in such a state (Oh, we’re never going to get out of this awful place! Never! Never! Never!”). Her breakdown is what you’d expect for a middle-class woman snatched from 1963 and planted down into a totally alien landscape, but her extreme reaction couldn’t have been repeated too many times. So you can contrast this with the casual way the time-travellers view the various sights they encounter a few stories later in The Keys of Marinus.

Za’s not a very good leader is he? And if it wasn’t for Hur, constantly guiding him, it’s clear that story would have ended in episode three. Hur is something of a Lady Macbeth, having to constantly prod and push her man in order for him to do the right thing. She isn’t evil though – and neither is Za – they just live on a totally different level to the Doctor, Susan, Ian and Barbara.

Although Za and Hur catch up with the Doctor and the others, when Za is attacked by an (obviously) off-screen animal it’s the perfect time for them to make their escape. It’s therefore intriguing that it’s only Barbara, the one who’s been the most desperate to escape, who decides to stay and help him.

Ian and Susan are initially reluctant, but acquiesce when they see that Barbara won’t be persuaded. This leaves the Doctor as the sole dissenting voice as he tells Barbara that “you’re trying to say that everything you do is reasonable, and everything I do is inhuman. Well, I’m afraid your judgement’s at fault.”

Barbara explains to Hur that “we will make him well again. We will teach you how to make fire. In return, you show us the way back to our cave.” It sounds like a decent plan but we’ll see that things don’t quite work out like that. The Doctor’s observation that the tribe’s minds change as rapidly as night and day seems to be quite astute.

The Forest of Fear also has the noteworthy moment when the Doctor picks up a rock and attempts to murder Ka. Or does he? The interpretation of this scene is certainly open to debate and it’s not as cut and dried as received wisdom would suggest. Yes, he picks up a rock and moves towards Ka but there’s not even a hint that he’s preparing to strike. And although he’s initially hesitant to explain himself when confronted by Ian, is that really enough to condemn him? In these early stories the Doctor was played as an elderly man, so it seems unlikely that he would have had the strength to bash Kal’s brains in, even if he’d wanted to.

I’ve always found the chronology of the cliffhanger to be odd. In the penultimate scene we see Kal and the others decide to set off after Za, Hur and the strange tribe – but how can Kal have caught up with them by the very next scene? Ideally Kal should have set off earlier in the episode, that way it wouldn’t seem so jarring to suddenly see him pop up to bar the way to the TARDIS.