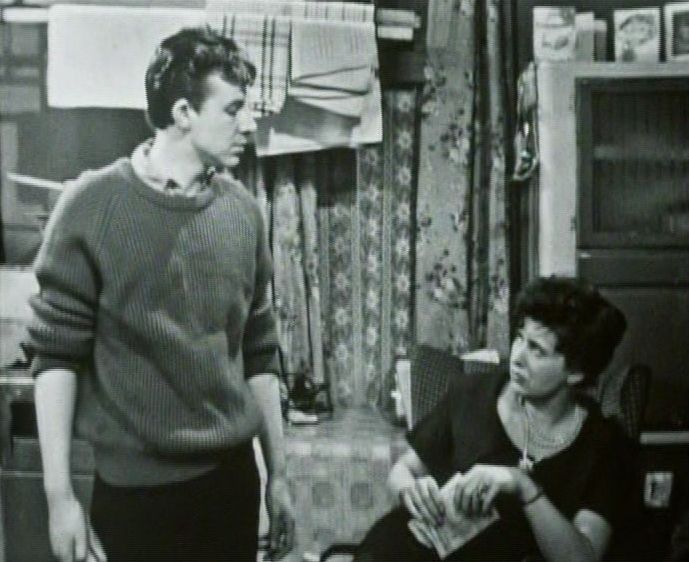 The episode begins with Elsie and Dennis rowing (which so far seems to be their default setting).  Elsie’s suspicious about the fact he returned home with twenty five pounds but eventually she believes his story about winning it on a dog race.  It’s another good scene between the pair of them although Philip Lowrie does suffer a major dry some two minutes in (luckily Pat Phoenix covers for him and he soon gets back on script).

Martha asks Mr Swindley if he has any news about Ena.  He tells her that she doing quite well at the local hospital, which reassures her and she resolves to make a visit shortly.  There’s a lovely little character moment when Martha tells him that she would have telephoned herself, but she’s “never learnt the phone”.  It’s just about credible in 1960 that some older people might still have a lingering suspicion about telephones.

Mr Swindley bemoans Ena’s absence and wonders if Martha might like to lend a hand in the hall.  He tempts her with the prospect of money, which seems a little odd (previously we’d learnt that Ena doesn’t receive a wage – only lodgings and coal).  Martha is interested, but I wonder what Ena will have to say about it?

This is the first time we see Ena with a hairnet (from this point on it’ll be her headwear of choice).  So what sort of patient do we think she is?  Patient and pliant or endlessly complaining and argumentative?  The latter of course.  Nobody’s safe from her acid tongue – as her daughter Vera (Ruth Holden) finds out.

It’s true that Vera’s something of a drippy sort, but you have to imagine that a childhood spent with Ena as a mother would have sapped the will of even the strongest of types.  Ena’s not pleased with the gift she’s brought (a pot plant) and is even less impressed when Vera decides to nip off almost as soon as she’s arrived.  Vera tells her that she’s desperate for a cigarette, something which cuts no ice with her mother.  “If god had intended women to smoke he’d have put chimneys in their heads”!

There’s a score of great lines from Ena.  Here she waxes lyrical about her doctors and her food.  “You know I had three doctors around me this afternoon and one of them was black as the chimney bag. Oh he was clean, you could tell. His face shone like black leather. Oh the food’s terrible, They’re always trying to make me eat boiled fruit. I said to that nurse, I said ‘it’s all right for folks as like it, but I like something that has looked over a wall'”.

Then Martha turns up and Ena learns that her friend has been helping out in the mission.  Or as Ena sees it, attempting to snatch her job whilst she lies close to death in hospital.  Ena bellows “I know what you’re after, you’re after me vestry” before the camera closes in on her for an extreme close-up.  After this frightening moment, there’s a moment of peace as a group of young choir boys entertain the sick with a carol or two.

The Barlows appear for the first time for a few episodes, but they don’t drive any plot threads themselves in this one – instead they get caught up in the hunt for the missing Lucille.  The absence of Lucille has made Esther frantic with worry, but although she tells Ida that she’s primarily concerned about the girl, Ida makes a face which suggests she believes Esther has set her sights on snaring Harry.  But it looks like Esther has competition, as Concepta Riley (Doreen Keogh) has just returned from Ireland and also seems interested in Mr Hewitt.  Clearly Harry has hidden depths ….

Don’t worry about Lucille, she turns up safe and sound and bearing gifts.  It’s quite noticeable that Esther seemed much more worried about her than Harry.  I’ve still not warmed to him yet – goodness knows what Esther and Concepta see in him.

Concepta is welcomed back by Annie and Jack, who are more than happy to let her take up her old position behind the bar.  The first of several rather jarring moments when characters look straight into the camera occurs when Jack and Annie see Concepta for the first time.  This is slightly unsettling, but as discussed above, it’s nothing to the sight of Ena on the warpath (that’s that stuff of nightmares!)

Ray Mort, a very familiar face, makes the first of a handful of appearances as the chirpy insurance salesman Ron Bailey.  And for trivia fans, this is the first episode to mention Rosamund Street.

Another well-known actor, Anthony Booth, also appears for the first time as Christine’s boyfriend Malcolm Wilkinson.  Unlike Mort, Booth isn’t as recognisable at first – with his dark hair he doesn’t look like the “randy scouse git” he’d later be best remembered for.  Malcolm only appears in three episodes, but Booth would later pop up decades later as a different character (he also married Pat Phoenix shortly before her death in 1986).

Although peace on earth seems to be the order of the day at the Tanners, this fragile entente cordiale is broken when a policeman comes looking for Dennis …..