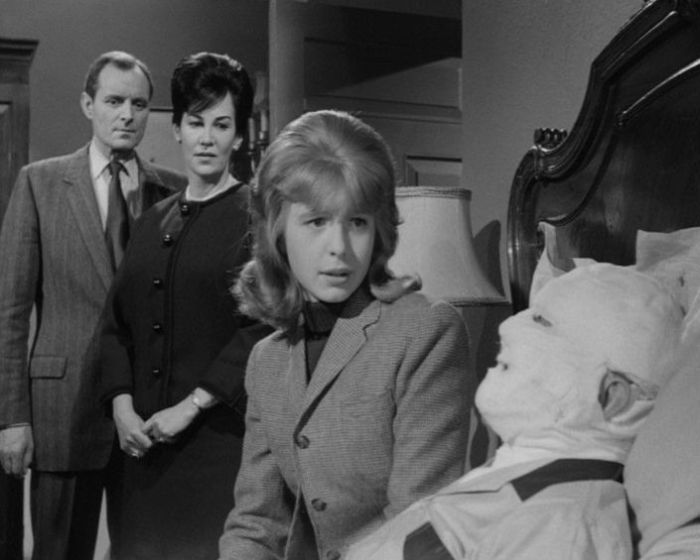 Wealthy industrialist Marvin Chase (Basil Dingham) is recuperating after being badly burnt in a car crash.  Nora Prescott (Eunice Gayson), an old friend of Simon’s, works for Chase and is puzzled by his post-crash actions (which has seen him sell off valuable elements of his business empire).  She attempts to voice her concerns to the Saint but is murdered before she can go into specifics.  Is there a connection between her death and the car accident?  There are several suspicious factors to consider – not only that Chase’s head and hands remain bandaged at all times, but also that his daughter, Ellen (Jane Asher), finds her father’s behaviour to be so changed ….

The appearance of Eunice Gayson in the pre-credits sequence (she runs into Simon who – rather improbably – is mooching around the London Stock Exchange) might lead you to imagine that she’ll be the Saint’s helper this episode.  Which she sort of is, but the fact she doesn’t make it to the end of the story alive comes as something of a jolt.  Possibly best known for her brief appearances in the first few James Bond films, Gayson is quickly transformed into the perfect secretary thanks to the addition of a pair of glasses!

The Chase house is a hotbed of intrigue and passion.  His wife, Rosemary (Katharine Blake), is carrying on a not terribly clandestine affair with Chase’s handsome young assistant, Bertrand Tamblin (Mark Eden).  Meanwhile, Chase’s black-sheep of a brother, Jim (Nigel Stock), can’t help butting in – irritated that his brother is rich and successful whilst he isn’t.

Dingham is perfect in his brief appearance as the unyielding elder brother – a man totally dedicated to making money – whilst Stock matches him as his dissolute, spendthrift poor relation.  Mix in a teenage Jane Asher as Chase’s devoted daughter and you’ve got a pretty packed household.

The car-crash is achieved in the most budget-conscious way possible.  We see a car driving down a country lane and then there’s a dissolve to a blurry spinning image which eventually stabilises itself to reveal a newspaper headline stating that Chase was injured and Tamblin killed during the blazing crash.  It was clearly a packed issue that day (other headlines include “Jobs pledge by Mac”, “Butler finds his birds have flown” and most improbably “The alpine Prince buys a pair of blue skis”).

With Chase tucked up in bed, looking like the Invisible Man, it shouldn’t be too hard to guess the upcoming plot twist.  Yep, Chase was murdered by Tamblin who – suitably bandaged up – is now masquerading as his former employer with the active connivance of both Rosemary and the crooked Dr Howard Quintus (Michael Goodliffe).

Few Saint stories were better cast than this one.  Eden and Dingham were both somewhat lacking in screentime, but Nigel Stock gets a decent piece of the action.  Michael Goodliffe is also gifted a strong role – although it’s plain right from Quintus’ first appearance that he’s a decidedly dodgy doctor.  It seems odd they went down this route since it means that it’s just a little easier to guess what the denouement will be.  Jane Asher is wonderfully earnest as the apple of her father’s eye.  Jim earlier told his brother that he was a cold fish – unable to love anything except the numbers on a balance sheet – but the brief interaction between Chase and his daughter (and her stricken reaction after the accident) suggests otherwise.

Simon and Nora have arranged to meet at the boathouse close to the local pub.  But someone gets there before Simon – and that someone is carrying a very large knife …..

Needless to say, Nora’s murder takes place with the minimum of blood, but what’s more interesting is that although director Jeremy Summers attempted to ramp up the tension at first by not showing the murderer’s face, the wider shots proved to be more of a giveaway.  Since Jim was seen lurking around the pub, possibly it was intended to briefly throw suspicion onto him, but this doesn’t really work as we can see that the assailant (even though he only appears briefly) was slim and dark-haired (Stock was a little tubbier and lighter haired).  And about the only slim and dark-haired person we’ve seen so far has been Mark Eden.

In Charteris’ story, published in 1939, Simon and Nora were strangers – although her death plays out in pretty much the same way (she has information, but is killed before the Saint can reach her).  Simon’s devoted but dim sidekick Hoppy was deleted from the teleplay (possibly a blessing), whilst Nora’s backstory (her father was a failed businessman which led to a sympathetic Chase giving her a job) wasn’t touched upon.  The basic plot remained the same, although the original had a much more hard-boiled feel (and was somewhat cut down for the screen, since it was a novella rather than a short story).

Simon’s confrontation of Rosemary and Quintus is rather enjoyable.  “Mrs Chase, I’ve never hit a woman in my life but there can always be a first time. Now sit down!”  Always good to see a flash of steel in Roger Moore’s portrayal.  One curiosity occurs when Simon explains to an admiring Inspector Welland (Charles Morgan) exactly how the scam was worked.  There’s an obvious dubbed moment when Moore says “Tamblin asked Chase” which leads me to suppose he got the names mixed up on the take (since Chase was driving, Tamblin had to ask him to stop in order that he could kill him and fake the crash).

Predictable the story might be, but it’s also a pretty high quality one.  Four halos out of five. 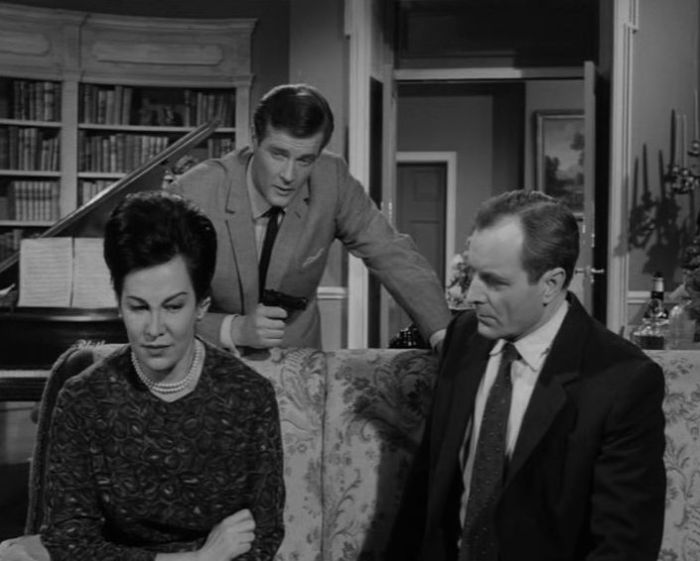