Skip to content
HomeHitting the Target. Doctor Who – The Mind Robber 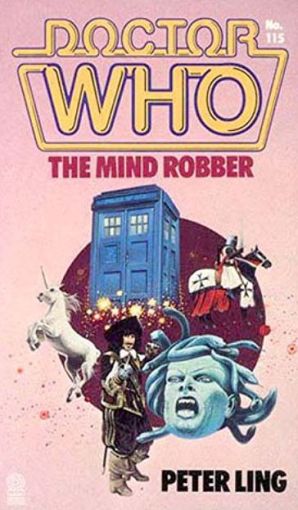 I love the tranche of Hartnell and Troughton novelisations penned in the eighties.  Many were written by their original scriptwriters and it’s fascinating to see how they retooled the stories after a gap of several decades.  Peter Ling, like many of his fellow writers during the sixties, wasn’t steeped in Doctor Who lore.  He wrote a single story and then no doubt didn’t think about it or the series again until he was commissioned to write this novelisation in 1986.

This isn’t a problem though and in fact there’s something rather charming about the slight sideways feel that you get from many of these books.  There’s some odd moments to be sure (such as the sight of the Doctor pottering around the TARDIS engine room with a can of oil and a rag) whilst it’s hard to imagine Troughton’s Doctor ever uttering the line “ye gods. I need my brains taken out and buttered”.  But I’d sooner this approach than an obsessive fixation on continuity – where things are either “right” or “wrong”.

Ling sticks pretty closely to the original script, although there’s plenty of instances where he takes the opportunity to do things which would have been beyond the series’ budget.  When Jamie and Zoe are tempted out into the white void, they both see very personal images.  For Zoe, it’s the sight of her mother, looking down at her from the sky, whilst Jamie sees his cottage, complete with his family waiting for him and a spot of supper on the table.  These visitations upset Zoe especially (possibly this was a hint that her mother had died).

After the TARDIS has exploded, the image of Zoe slowly slipping off the console and descending into nothingness is an evocative and disturbing one.

I don’t know whether Ling’s script had originally intended for Zoe to briefly find herself dressed as Alice in Wonderland (encountering a white rabbit with a pocketwatch and falling down a rabbit hole) but if so, it’s a shame we didn’t get to see it.  Possibly the fact that the recording would have had to have been paused in order for Wendy Padbury to change clothes was the prosaic reason why it didn’t happen.

It’s slightly odd that Zoe has never heard of Alice (especially since she knows all about the Karkus – she’s aware of comic strips then, but not classic literature).  We’re told that this is because she comes from the twenty first century, which seems a fairly feeble rationale.  The Karkus is good fun – especially since he comes complete with Batman-style speech bubbles which accompany his every move and gesture.

Ling didn’t make any attempt to differentiate the Master in his story from the Doctor’s identically named arch nemesis, which no doubt would have confused some people.  Early reference books did make a distinction – The Making of Doctor Who called him the Mind Master, for example.  Mind you (sorry), that was confusing too – when I finally saw the story, I was surprised he wasn’t referred to as the Mind Master.

It’s characteristic that Jamie is disappointed when Rapunzel disappears (he was looking forward to getting to know her a little better).  Jamie – like Frazer Hines – always had an eye for an attractive female …

It’s a pity that Ling didn’t come up with an alternative ending as it seems to contradict everything we’ve previously been told.  Earlier, the Doctor realised that if he attempted to create fiction then he’d be trapped in the Land of Fiction forever.  But when he and the Master meet for their climatic battle, he does precisely this with no consequences.

But that apart, The Mind Robber is a cracking read.  There’s plenty of bonus material not seen in the original television production, but not so much as to make it unrecognisable.  Certainy a book that’s worth tracking down.