Skip to content
HomeHitting the Target. Doctor Who – The Mind of Evil 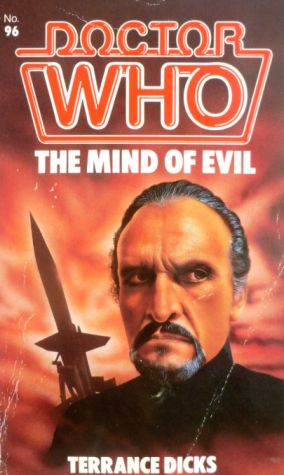 Although most of the Pertwee stories were novelised during the seventies, four tales – The Ambassadors of Death, Inferno, The Mind of Evil and The Time Monster – were skipped.  It’s interesting that two of the titles were by Don Houghton, but presumably that’s just a coincidence as there’s never been any suggestion that he was actively blocking publication.

When Target eventually decided the time was right to mop up these stragglers, Houghton declined to tackle his stories – Inferno and Mind – so the task fell to that reliable old warhorse Terrance Dicks.  Published in 1985, The Mind of Evil is a very faithful transcript of the televised story (even keeping most of the original dialogue intact).  This had become Dicks’ style – something which was appreciated and mocked by different sections of fandom.

For some, in the days before VHS copies were widespread, having an almost verbatim novelisation of the television story was appreciated.  But others wanted books which went beyond the televised events and were less impressed with Dicks’ workmanlike style.  The printed word does had advantages over the television image in certain respects though – for example, the visual manifestations of the evil impulses generated by the Keller machine.  On screen we saw less than impressive superimposed images (water, fire) but there was no such limitations on the printed page.

Dicks also remembered that some readers might be unaware of the Doctor’s current status, so he helpfully sets the scene by informing them that, at present, the Doctor is exiled to Earth and working for UNIT.

The various criminal types are given very brief backstories.  We learn that Barnham had choked the life out of a security guard who had disturbed him whilst he was blowing a safe whilst Harry Mailer is painted as a Kray-like gangster (eventually caught because he was rash enough to kill somebody in public).

It’s notable throughout the television original that the Doctor’s in something of a bad mood, especially to begin with (his arrogance is very much on overdrive when attending the initial demonstration of the Keller process).  Dicks doesn’t attempt to soften this and, indeed, his condescending attitude to all around him – including Jo – is even added upon.  At one point, the Doctor despairs of having to leave the Keller machine in the hands of Jo (whom he regards as a feather-headed child).  But this was still early on in their relationship, so it’s maybe not as brutal a character assessment as it first seems.

Benton can always be relied upon for a comedy moment or two, and Dicks delightfully paints him as a wistful James Bond wannabe – dreaming of vodka martinis, shaken not stirred, Bentley sports cars and mysteriously beautiful international spies.  His actual assignment – keeping tabs on the suspicious Captain Chin Lee – is rather more down to earth though.  The Brigadier’s assessment of why Benton is fundamentally unsuitable for undercover work is also entertaining (Benton lurking in a doorway with his raincoat collar turned up, was about as inconspicuous as an elephant at a tea party).

Not the most essential Target then, unless you favour a very accurate reproduction of the events on screen, but it’s still one of those books which whetted my appetite for the television original.

2 thoughts on “Hitting the Target. Doctor Who – The Mind of Evil”