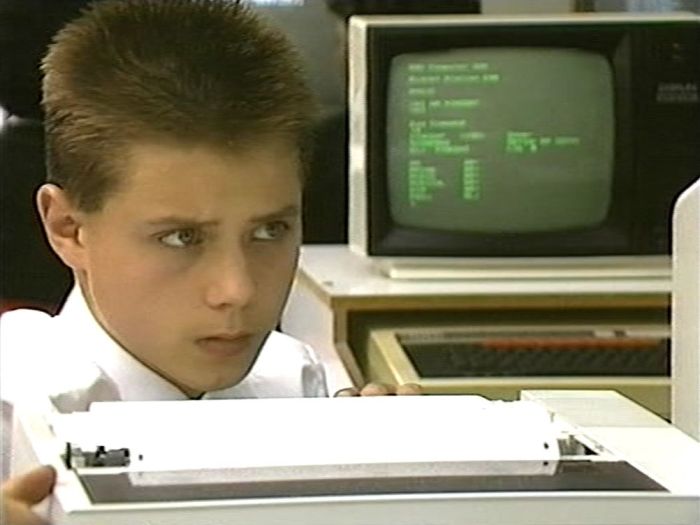 The great PE kit reminder service is in full swing and to assist the process, school equipment (namely the computer and printer) is being pressed into service by Gonch and the others.  There’s nothing so evocative as the sound of a dot matrix printer printing inexorably slowly, whilst it’s interesting to see that Grange Hill still uses BBC B’s.  It’s odd though that back in the heyday of the BBC computer (say 1983) Grange Hill never took the opportunity to utilise them in order to generate a spot of sneaky product placement.  Barbara Thorn, later that year to join The Bill as Inspector Frazer, makes a brief appearance as the computer studies teacher.

It does look like Mauler McCall and his rubbish Grid Iron Crew will be providing this years Harriet the Donkey moments.  They pursue Tegs around the school in a “comedy” chase before deciding to tie Ziggy up.  Ziggy declares that Mauler won’t be laughing for too much longer, but considering the eons it took for him and Robbie to gain revenge over Imelda, I won’t be holding my breath …..

Some of the first years dress up as people from different points in history.  Chrissy isn’t happy with her clothes, but Susi likes what she’s been given to wear.  Although it’s the boy dressed as a Viking (complete with a helmet sporting two very large horns) which really catches the eye.  Whilst Chrissy is out front – glowering – Matthew’s ever increasing web of lies is becoming more obvious.  He’s told Clarke that he’s due to fly to Amsterdam for the weekend with his father, but has trouble in remembering which airport they’re going to use.  Matthew’s habitual storytelling is gently teased out during these early episodes – it’s a signifier that the boy is unhappy, but the reason behind his tall tales remains nebulous at present.

Miss Stone and Mrs McClusky later debate Matthew’s weekend trip, with Mrs McClusky deciding that Matthew could be going to Amsterdam, although it seems unlikely (she declares that it’s rather grand).  Given that the journey from London to Amsterdam is hardly a lengthy one (223 miles) and wouldn’t have been that expensive, this seems like a slightly odd statement to make.

Stephen Churchett’s an actor with one of those faces that you know, but you just can’t remember exactly where you’ve seen him (he’s got a lengthy track record though – from Up Pompeii! in 1970 to EastEnders in 2015).  Today, he’s playing an Education Welfare Officer who is on the hunt for the absent Danny, but is equally happy to snag a truanting Trevor.  Trev, thinking on his feet for once, gives him Vince’s name instead of his own.  Mind you, since the Welfare Officer later gives Mr Bronson a description of “Vince” it’s maybe not as clever as he first thought.

Robbie’s delighted with the way the strip hire business is going, telling Ziggy that they’ll be laughing all the way to the Leeds.  A cultural reference which would have made sense at the time, although is possibly more obscure now.

Old GH hands may find the next scene a little familiar.  Mauler’s suddenly taken an unhealthy interest in Calley but avenging knight Robbie happens to be passing by and isn’t impressed.  This seems to be a definite echo of Gripper’s obsession with Claire (Stewpot, of course, was her knight in shining armour).  But the 1988 love triangle is less effective, mainly because Mauler – a very underdeveloped character anyway – has never shown any interest in Calley before.  Neither has Robbie, it has to be said, but it seems obvious that they’ll become an item soon.  I wonder if Calley’s horoscopes have foretold this?!

Joshua Fenton, as Mauler, pulls some extraordinary faces when Mauler confronts Robbie.  Compared to Gripper (or even Imelda) I’m afraid that Mauler is a very second-division heavy.  He may spout plenty of threats, but there’s no sense that – unlike Gripper or the even more unhinged Booga – he’s actually dangerous.

Things you wouldn’t see today …. Georgina’s latest dare involves her covering her face with yellow food dye and giving us her best Chinese impression.  “Ah so”.  Also appearing in the cookery scene is Susan Field as Mrs Evans.  Like Stephen Churchett. she’s an actor who you might instantly recognise (she was active between 1961 and 2000) even if you can’t name too many of her credits off the top of your head.  SF fans might remember her from the first Blakes 7 episode, The Way Back, where she played the conniving Alta Morag.

The saga of Mr Robson’s missing motorcycle helmet rumbles on throughout the episode. It’s eventually discovered in Mauler’s locker, although he didn’t pinch it (Tegs – looking to gain revenge – framed him).  Mauler’s reaction when he finds it is priceless – pricelessly bad that is.   He opens his mouth wide like a gaping fish.  This is supposed to be shock I guess, but it appears to be another example of bad acting.  Since Fenton will be a regular in the series until the end of series thirteen, I hope he improves soon.  Rather better fare can be found when a desperate Ziggy tries every trick in the book to stop Mr Bronson from inspecting his locker.  He’s innocent of stealing the helmet, but explaining all the PE kits he’s got stashed away might be difficult …. 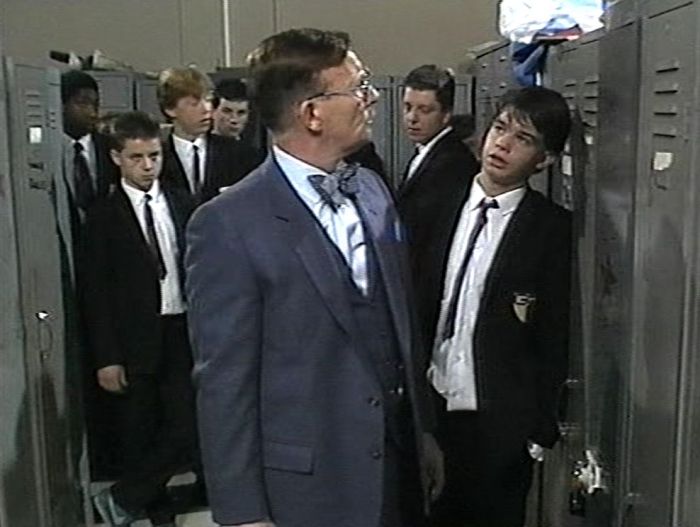