Skip to content
HomeDoctor Who – Marco Polo. Episode Four – The Wall of Lies 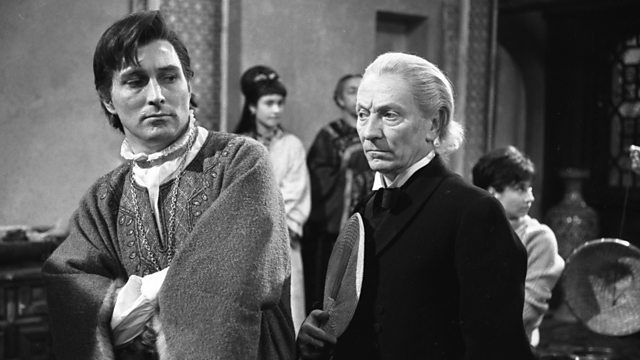 Barbara is rescued from the clutches of the Mongols after Ian realises that Susan was right – the eyes in the cave did move (behind the wall was a secret room where Barbara was being held). Once again, the Doctor is shown not to posses all the answers – he was dismissive of Susan’s claim, seemingly treating it as nothing more than a hysterical outburst – so it fell to Ian and Marco to put two and two together.

Tegana continues to chip away at Marco’s trust in the Doctor and his friends. “Only a fool defends his enemies. Be warned, Marco. They will set us at each others throats by lies and deceit, and then, when they have divided us, then they will destroy us one by one.”

Barbara insists that she followed Tegana to the cave – something he strongly denies. As Marco tells Ian. “Tegana is a special emissary of Noghai, on his way to talk peace with Kublai Khan. He’s a very important man. You are mysterious travellers from some far off land I know nothing about. Now, if you were in my position, a servant of Kublai Khan, whose word would you take?”

A slight weakness of the story is that since Tegana has been presented as such a powerful presence it slightly diminishes him every time his plans to kill Marco and the others are scuppered. But there’s a sense in this episode that we’re now entering the endgame. I particularly like the way he displays his true feeling for Marco (telling his associate Acromat that Marco should be killed like an old woman in her bed). And the Doctor’s death holds no fear for him, a stake through the heart should deal with the magician.

The relationship between Marco and the others comes to a head when he realises that the Doctor has been working on the TARDIS in secret.

POLO: I’m sorry I doubted your word, Tegana. Give me the key, Doctor.
DOCTOR: No.
POLO: You’re an old man and I do not wish to use force.
DOCTOR: That is what you’ll precisely have to do, Polo.
(Tegana wrenches the key from the Doctor)
TEGANA: Did I not say he had another key?
DOCTOR: Put that key in the lock, Polo, and you will destroy the ship. Then where will your precious Khan be, hmmm? You need more than a key to enter my ship. You need knowledge. Knowledge you will never possess.
POLO: Tell me.
DOCTOR: No, understand? No! I’d let you wreck it first!

This results in the Doctor and the others being kept as virtual prisoners. Ian chafes against this and decides that they need to take action. They resolve to capture Marco and force him to hand over the TARDIS key. The Doctor’s statement that “I think by the time I’ve finished with that gentleman, he’ll only be too glad to let us go” is intriguing. Exactly what does the Doctor plan to do to?

Sadly, we never learn what the Doctor’s special brand of persuasion might be, as Ian discovers that the guard outside is dead. With Marco’s encampment under attack they have the perfect cover to escape, but can they really just cut and run?