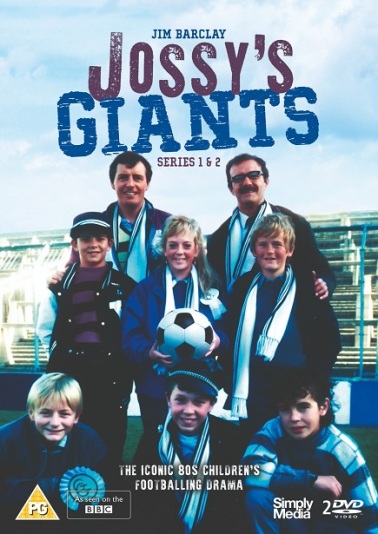 Sid Waddell (1940 – 2012) might be best remembered as the voice of darts (“the atmosphere is so tense, if Elvis walked in with a portion of chips, you could hear the vinegar sizzle on them”) but there were several other strings to his bow – Jossy’s Giants being one of them.

Graduating from St John’s College, Cambridge with a degree in modern history, Waddell worked in academic circles for a few years before joining Granada Television in 1966 (moving to Yorkshire Television two years later). He produced the news programme Calender as well as creating the well-remembered children’s serial The Flaxton Boys in addition to the cult classic The Indoor League (which is available on DVD for the terminally curious).

The growth of darts in the late seventies kept him busy, but by the middle of the following decade he was obviously keen to spread his wings, so Jossy’s Giants was born. Running for two series on CBBC during 1986 and 1987 (both of five episodes duration) Jossy’s Giants is centred around a boy’s football team. Led by the charismatic Joswell ‘Jossy’ Blair (Jim Barclay) they may be somewhat lowly ranked when he takes charge, but he has big plans for them.

The series one opener, Hungry for the Game, establishes the parameters of the series. Albert Hanson (Christopher Burgess) is the manager of the beleaguered Glipton Grasshoppers but he’s having trouble moulding them into a cohesive fighting unit. Losing has become too much of a habit and it seems that only a miracle will save them …

But wait, who’s this singing stranger limbering up on the touchline? Why it’s Jossy, who’s been watching the Grasshoppers for twenty minutes and now ambles over to give them the benefit of his advice. He’s a plain-talking man, not backwards in handing out brickbats, but maybe this is precisely what they need.

We also get some backstory about Jossy. A promising youth player, during his first match for Newcastle United at St James Park he was tackled from behind and never played again. So the disappointment of his own curtailed playing career no doubt makes him keen to mould the next generation of hopefuls.

But what of his raw material? It doesn’t look promising. Goalkeeper Harvey McGuinn (Julian Walsh) seems to have an aversion to handling the ball (a slight problem) and would much rather go ice skating instead. Glenn Rix and Ian ‘Selly’ Sellick (Stuart McGuinness and Ian Shepherd) are the team’s two strikers – but they’re more memorable for their outlandish haircuts than their goal-scoring skills.

Ross Nelson (Mark Gillard) is the Grasshoppers flair player – but boy, does he know it. Best to say he’s a little conceited, whilst his ambitious bookmaker father, Bob (John Judd), is a complicating factor. Captain Ricky Sweet (Paul Kirkbright) tries to keep it all together whilst their number one fan – Tracey Gaunt (Julie Foy) – is always on hand with a touch of moral support or a magic sponge. You get the impression that she’d like to play for the team, but this seems unlikely. After all, she’s only a girl ….

It falls to Tracey – easily the most proactive of them all – to ask Jossy if he’d be interested in the job of manager. Some of the dialogue is a little eye-opening (when Tracey interrupts Jossy on his jog, she tells him that she’s been waiting for him – only for him to reply that she’s a little young for him). Hard to imagine that sort of implication, even if it’s only made in a subtle way, would be repeated today.

Tracey has a convincing argument for him though. They need a nasty and bossy manager, so Jossy seems ideal! This is a lovely comic moment, typical of Waddell’s style. Eventually Jossy’s worn down and so one change of name later (to the Glipton Giants) he begins to mould them in his image.

Foul Play sees star player Ross defect to another team (he’s disgusted at not starting their latest five a side match). Of course, Ross’ new team ends up meeting the Giants in the five a side cup final. Can Jossy’s boys win their first trophy? A lovely turn from Tony Melody as the rival manager (he’s something of a martinet) and some lengthy football action (shot on VT and cut very rapidly) are two reasons why this one’s entertaining.

The Battle of St James’ has some delightful moments as Jossy – anxious to prevent the council from redeveloping their football pitch – pays a visit to an amorous female councillor, Glenda Fletcher (Jenny McCracken), who may just be able to help. Mind you, it seems unlikely that when he goes along to her house (for some wine, nibbles and Sade on the stereo) he’d have invited the whole team plus Tracey (and all dressed in balaclavas) to maintain a watching brief outside the window. Never mind, it’s the excuse for some lovely character comedy. Unsurprisingly, the always-sensible Tracey eventually saves the day.

The Promised Land sees Glenda and Tracey take on Jossy and the boys at netball (no prizes for guessing who comes out on top). Although when Glenda is elected vice-chairman of the Giants, her female solidarity with Tracey begins to crumble (“give a dictator an inch” mutters Tracey darkly). Later, Jossy and the lads receive a guided tour of St James’ Park from Bobby Charlton. As a non-actor he’s a little stilted, but it’s still a wonderful scene.

A couple of familiar faces – Tony Aitken and Harry Towb – guest-star in the series one closer Final Demand. There’s a big match coming up, but Jossy’s gambling (a running thread throughout the series) comes to a head here. If Jossy agrees to throw the cup final, then his gambling debts will be written off. It’s another of those plot-lines that seems a little less than credible, but the performances carry the story along.

The rejigged theme tune at the start of series two indicates that girls will prove to be more of a distraction than they were during the first series. The opening episode, The Glipton Romeos, develops this, as Jossy discovers that all of his team have been bitten by a bug (of the love variety) and so have forsaken the beautiful game. Since Jossy’s only been gone two weeks, clearly the lads are all fast movers.

Mind you, if the concept of Jossy’s Giants as ladykillers is odd, then that’s nothing to the revelation that Jossy and Glenda have become engaged (at the end of series one they were barely speaking to each other!) The love bug means that Jossy has to recruit another team for a match on Saturday (otherwise they’ll lose their ground) and so with Tracey’s assistance rounds up a scratch team of girls …. 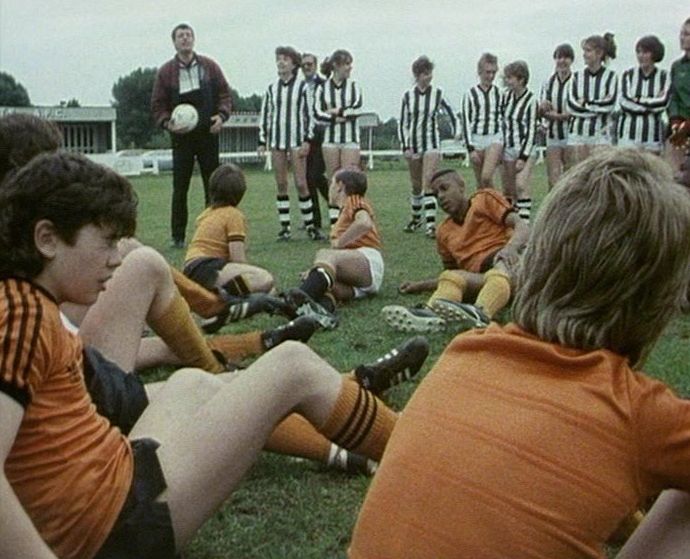 Like series one, the second series has a celebrity football cameo. Bryan Robson, no less, who Jossy and the Giants meet before the recording of A Question of Sport. Robson, like Bobby Charlton, is a little wooden, but that’s all part of the fun. It’s also a lovely treat to see inside the Question of Sport studio (and the legendary David Coleman too).

The Italian Take-Away find the Giants tackling a crack Italian team (although the lads are more concerned about the way these smooth-talking foreigners are making eyes at their girls) whilst Home and Away finds Jossy still attempting to corral his distracted team back into shape. Will a trip to the seaside (with plenty of fresh air) do the trick? Or will they find other distractions beside the sea?

The final episode, A Perfect Match, sees Jossy stretched to the limit. There’s a big match on Saturday, but there’s also the little matter of his wedding to Glenda on the same day. What could possibly go wrong?

Most of the youngsters weren’t terribly experienced, acting-wise, and occasionally this shows (some of the performances are a little broad). But they also feel natural and some – especially Julie Foy – handle the material very well, demonstrating real comic flair. Jim Barclay’s Jossy is the glue that binds the series together, the very experienced Christopher Burgess is another plus on the acting front whilst Tony Melody, always a joy, returns for several entertaining appearances during the second series.

Although some of the plotlines are a little unrealistic, the sheer fizz of Sid Waddell’s scripts, the number of good one-liners and the interplay between the cast more than makes up for this. Jossy’s Giants is a comic delight and comes warmly recommended.

Jossy’s Giants is released by Simply Media on the 12th of March 2018, RRP £24.99, and can be ordered directly from Simply here.

One thought on “Jossy’s Giants – Series One and Two. Simply Media DVD review”