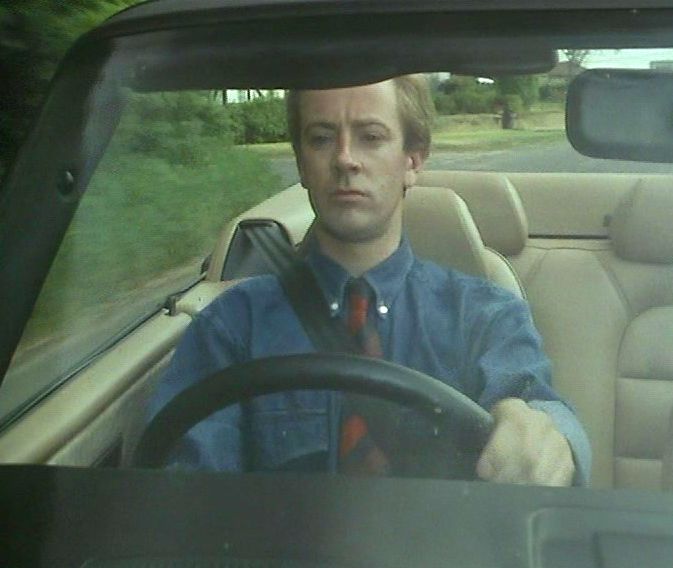 Leo’s come up in the world since he was a motorbike riding, petrol pump attendant during series one. Now (as a thrusting young executive at Relton, with a seat on the board beckoning) he owns an open top sports car. But his leisurely drive through a series of winding country lanes is interrupted by a honking Range Rover behind him.

This then develops into a moderately exciting action scene as the pair pull up at a crossroads and Orrin – for it is he – smirks at Leo from the opposing drivers seat. They then set off again and a (fairly) high speed chase ensues, with the incidental music being set to “exciting”. All the clichés you’d expect to see are present and correct – a lorry blocking the road (check), a rural type observing proceedings with bucolic indifference (check).

This brief game of chicken only serves to splatter Leo’s car with mud. “Orrin Bloody Hudson” he mutters. Although it’s slightly hard to reconcile this new, ultra-cocky Orrin to the more pliant man we’ve previously seen, it’s not totally unbelievable. A few years back he was something of a blank canvas who seemed to be easily manipulated by his father. Today we could be seeing the result of that manipulation.
Leo loses several credibility points for listening to Chris De Burgh on his car stereo, but at least it was the slightly rocky Don’t Pay The Ferryman rather than The Lady In Red.

Ken doesn’t change. Vicki, dressed in a tight skirt, is on the hunt for a file. Ken, delighted at eyeing up her shapely form, is keen to suggest that the file may be in various places (which are all locations designed to make her stretch just a little bit more).

Although Jack was initially sceptical of Vanessa’s suggestion that they should assemble a photofile of the Mermaid Yard, now he’s warming to the idea. He confides to Tom that he could have been a male model! Lovely stuff, as is Jack’s continuing laissez faire attitude to the Mermaid – he’d much sooner be swanning off, buying flowers, than be stuck at the yard worrying about boats. Tom, facing an ever mounting list of problems, isn’t too chuffed at this, but surprisingly he doesn’t protest too much.

Fair to say that Jan and James aren’t getting along (he’s annoyed that she’s been rifling through his private papers – although it was an accident). Jan’s astonished to discover that James was a designer, but his one and only collection was savaged by the critics and now he’s given up on the possibility of ever designing again. Jan thinks his designs are wonderful (although since all the critics disagreed, this casts some doubt on her judgement).

Interesting that Vanessa’s living room was shot on film and on location rather than at the studio. It’s unusual, but possibly it was intended as a once off location – hence it would have been cheaper to shoot it this way, rather than go to the expense of creating a studio set. But it works out for the best in a visual sense, as their fireside chat – Jack musing over Charles and Avril – looks very good on film.

Vanessa is keen for Jack to spend the night but he – due to an early start tomorrow – isn’t interested. Or is it more to do with his commitment issues? Even though he treated his late wife abominably, he still shows a tremendous degree of loyalty towards her.

This episode confirms for the first time that Vanessa’s house is next door to Relton. Makes sense in one way, since Relton had previously been in Vanessa’s family (at one point it looked as if she might have inherited it). Although given this, it seems slightly odd that she’d decide to pitch up so close and run the risk of stirring up bitter memories.

Polly had arranged a dinner with her, Gerald, Abby and Orrin but Abby throws a spoke into this by deciding to go out with Leo instead. But Polly doesn’t give up easily, so she and Orrin hotfoot it to the restaurant where Abby and Leo are eating (easy to do remember, Tarrant’s not overflowing with restaurants). There then follows a tense scene where Orrin tells Leo to butt out as “this is none of your business”. But Leo takes charge, leaving Orrin frustrated.

There are plenty of late night heart to hearts in this episode. Jack, after leaving Vanessa, visits Avril at Relton whilst Polly and Gerald have a straightforward conversation for the first time in a long while. Polly’s insistent on returning to America and Sir Edward (but is her relationship with him purely business?) and would like Gerald to join her. He doesn’t wish to do so, which pretty much brings their tottering relationship to an end.

Leo and Jan also have a late night chit chat, but theirs is brief and to the point. She does ask about Abby, which for Jan (often self obsessed) is a point in her favour, but the scene’s much more about Leo declaring that whilst James’ designs might not have been fashionable fifteen years ago, they could be now. This triggers off a lightbulb moment in Jan (or possibly a poundsign moment!) as she mulls the concept over. It’s another good example of Leo’s perceptive nature, although it’s slightly hard to believe that a bunch of designs laughed at in 1974 would be a hit in 1989. Still, stranger things have happened.

The next day, Avril and Tom have a heart to heart about Jack and Vanessa. They’re clearly so engrossed that they don’t notice Jack lurking by the door.

After acting incredibly arrogantly for the last few episodes, Orrin’s now in a conciliatory mood – asking Abby to come home for William’s sake. But it’s more for the sake of his political career of course. And then things liven up nicely when Orrin and Leo plunge into the dock. In a way, this is a re-enactment of Leo and Abby from the start of the first series – only this time, Leo’s rescuing Orrin from the water rather than Abby.

Everything really kicks off when Abby jumps into a small boat and rows across to them. All the time this has been happening nobody else seems to have noticed (well that’s not strictly true, people do point fingers and talk into walkie-talkies, but that’s about all they do).

We close on a rather decent cliffhanger as a very damp Leo and Abby confront each other over Orrin’s water filled and insensible body. “He’ll live” mutters Leo with the minimum of concern. Leo’s much more concerned about the fact that he didn’t hear Abby’s response to Orrin’s offer that they should try again as a family ….