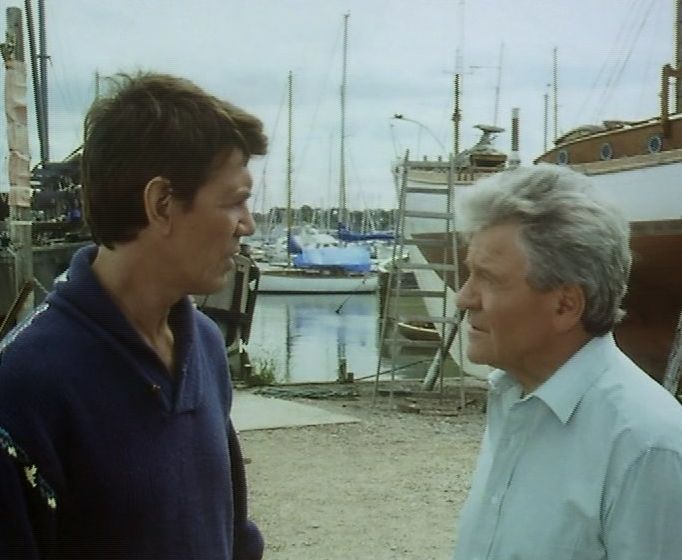 Jack’s suddenly enthused with a whole new work ethic – which causes raised eyebrows from Tom and Bill. But this is only a small skirmish compared to the fireworks ahead – Tom learns that Jack’s decided to employ Vanessa as the Mermaid’s PR agent. “It’ll put us on the map” says a confident Jack. Maybe it’s the mark of a good PR woman that although Jack and Tom were at complete loggerheads, after Tom exchanged a few words with Vanessa he backed down …

Gerald seems convinced that his relationship with Polly is over. He tells Charles that after twenty five years of marriage he’s going to miss her. “Mm hmm” says Charles. Well, not much else he could have said really. As touched upon before, it’s slightly odd they didn’t make a little more of this – Gerald mentions that Polly should be boarding her flight for America about now, but we don’t actually see it.

The main point of this scene comes a little later, after Gerald inadvertanly lets it slip that Abby’s pregnant. Given that they’ve had no (on-screen) contact this series, it’s not too surprsing that – as yet – she hasn’t confided the news to her natural father. Plus she’s yet to tell Leo either.

It’s full steam ahead in the fashion world, although James continues to fret about his new designs. I can’t take my eye of the model he’s using though (just before the twelve minute mark for those who want to check it out). This extra certainly knows how to steal a scene – just marvel at her wide range of facial expressions – so much so that I found it hard to concentrate on what Jan and James were talking about.

Orrin – sporting the yellow sweater draped around the shoulders look – is in a concilliatory mood. But Abby (not for the first time) isn’t having any of it. Do you get the feeling we’ve been here before? This is one of those plotlines that seems to have been going round and around for ages without any resolution. For now though, Orrin’s reached the end of the road (he disappears for the rest of series five, but features heavily throughout the sixth and final series).

So how long do you think it will take Leo to realise what Abby’s news is? She drops an early hint (ordering a bottle of champagne, but telling him that she shouldn’t drink any) but the penny doesn’t drop. He then has a guess (“you’ve got a new job?”) which falls slightly wide of the mark. His next guess (“you’re pregnant”) hits the bullesye, but it was clear that he was joking. Poor Leo, for all his recent sophisticated upward-mobility, at heart it seems he’s still something of a naive young lad. Or that’s how he’s being written at present.

Gerald – once again – is homing in on Laura. She’s sporting big hair today and seems very pleased to see him. Whilst Gerald and Laura are chuckling away like nobody’s business, Charles is ensonsed with Julian Burridge (John Line) – all part of his scheme to oust Avril from Relton.

Once Laura and Gerald have stopped chuckling, they discuss Charles. Gerald admits that he’s “demanding, exhausting and I wouldn’t be content working with anybody else”. Following their early series wobble, Gerald and Charles seem back on firmer ground (but nothing lasts forever). Charles meets Laura for the first time and then hotfoots over to see Abby.

I love how Charles tells her that he made extra sure the flowers he selected turned up on time (by asking with his secretary to confirm with the florist). It’s an unconcious thing no doubt, but clearly he would never think of soiling his hands by going into a florist and actually buying the flowers himself.

It’s not the most convivial of chats though – Abby’s still bitter about William and the fact that Charles hasn’t been able to help. This seems a little unfair to Charles though. From the point of view of showing a vunerable and human side to Charles’ nature, this is a good scene. So far this year, Charles has been cast in his more familar ruthless tycoon persona (so a change of pace, even for just a moment, is welcome).

Charles and Orrin later have another brief, but unappy meeting. “You’re going to regret this” mutters Orrin after Charles tells him that unless he hands over all copies of the secret recordng of their previous meeting he’ll destroy him. Quite how Charles would do this isn’t made clear, but he sounds confident. But Orrin – later sharing a beer with Ken – sounds equally confident that he’s going to squash Charles like a grape. They both can’t be right, hmm ….

Gerald (complete with flowers – you can bet he actually bought them himself) pops round to see Laura. She’s still sporting the big hair and has now squeezed herself into a little black number. It’s a gloriously sunny day in Tarrant (the sun is shining, the birds are singing). How can this be? We’re in the studio of course. This is rather apparent when Laura opens her front door and we see Gerald standing by some very fake-looking greenery.

Gerald hasn’t discussed his sexuality (or indeed been seen to have any sort of relationship other than with Polly) for some time. There seems to be something of a retcon of his character here, after he tells Laura that he used to think he was gay but he actually isn’t (he loved a man he tells her, but not in the physical way that the other man wanted).

Ivor Danvers is remarkably good in this scene, managing to make Gerald touching, tender and vunerable all at the same time. Danvers is possibly one of HW‘s less celebrated stars, but given the material he never fails to deliver. 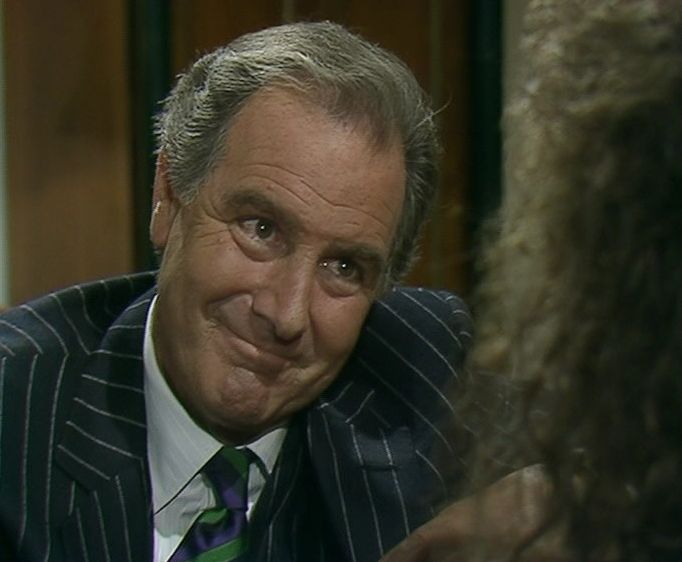