AVPP was born out of necessity rather than inspiration. Andrew Davies had been commissioned to write a series about three mature women students but had lost inspiration after penning several episodes. The BBC, having already paid him upfront for the whole series, gave him two options – either return the money or write something else.

Davies decided that writing something else would be less painful, so the bizarre world of Lowlands University began to take shape. Drawing on his memories of his own past (Davies had been a lecturer at the Warwick Institute of Education) he set to work.

Receiving top billing, Peter Davison, as Stephen Daker, is the still point of the series. Surrounded by three grotesques – Jock, Bob and Rose Marie – Stephen’s function (especially in this opening episode) is to operate as their straight man. Although Davison possesses a sly and sharp sense of humour, he was quite relaxed at the prospect of being the “normal” one. “I was quite happy to be surrounded by lunatics. In effect, I was the one who the audience related to in the midst of these madmen – or madwomen”.

Miscommunication is at the heart of A Very Long Way From Anywhere. Stephen, having made the decision to make a clean break from the shattered detritus of his marriage, is determined to make a fresh start at Lowlands. But his problems start right from the moment he runs into the formidable practice receptionist – who needs some convincing that he’s a doctor and not a patient.

But that’s nothing compared to the confusion generated when he meets the senior member of the practice, Dr Jock McCannon (Graham Crowden). It won’t surprise you to hear that Crowden has a habit of stealing scenes, although when he’s placed opposite David Troughton then the honours are more even.

Jock: Would you care for a wee drop of something, Stephen?
Stephen: Oh, not for me! Bit early in the morning.
Jock: Oh! Very wise! I’m delighted to hear you say it. As a matter of fact, your predecessor gave us some cause for anxiety there. Ohhh, he gave the vodka bottle a most tremendous pummelling! [he pours himself a very generous tumbler full of scotch]
Jock: A total abstainer, eh? Very wise!

David Troughton’s Dr Bob Buzzard is gifted a whole tranche of sparkling dialogue. He begins by outlining to Stephen exactly how the University runs. “I’ll tell you what it’s like. It’s like a very, very inefficient sector of British industry. Top management are totally corrupt and idle, middle management are incompetent and idle, and the workforce are bolshy. And idle. And of course, there’s no bloody product!”

The moment when they compare notes, re their respective careers, is also wonderfully quotable. Davison underplays beautifully.

Dr Rose Marie (Barbara Flynn) is a formidable feminist whose character seems to be just as relevant today as she was then (easy to imagine she’d be a hit on Twitter). Stephen’s introduction to her is short but not terribly sweet (I love the way that Davison’s face falls when Bob cheerily tells Stephen afterwards that she’ll now be his enemy for life!)

Rose Marie’s modus operandi is made clear when she later tells a patient, Antonia (Liz Crowther), that illness “is something that men do to women”. Flynn’s performance is a great deal more contained than the hyperactive Troughton, but it’s the contrast between the polar opposite characters of Rose Marie and Bob which helps to generate some lovely comic clashes in the upcoming episodes.

After reeling from these three encounters, Stephen then has a more pleasant meeting with ministering angel Lyn Turtle (Amanda Hillwood) at the pool (she eventually saves him from drowning). But Stephen’s continuing inability to express himself clearly leads to conflict later, after he runs into her at a drinks party organised by the Vice Chancellor Ernest Hemmingway (not that one). He’s surprised to see a pool attendant at such a party, a faux pas which he regrets straight away. And she twists the knife, just to drive the point home.

Hemmingway (John Bird) doesn’t have a great deal to do here, although he’ll play a major role later in the first series. Instead it’s his wife, Deirdre (Harriet Reynolds), who’s more to the fore during the rather excruciating (for Stephen, anyway) drinks party. Told it was very informal, Stephen’s choice of dress (a scruffy jumper) proved to be just a tad too informal. The way that Deirdre sweetly attempts to rationalise this breach of etiquette (possibly he’s just got off a flight and the airline has lost his luggage?) is another delight.

The final significant moment of the episode comes after Stephen dispatches a Chinese student (Sarah Lam) suffering from acute appendicitis to the hospital. Jock had examined her earlier, but decided that her symptoms were nothing more than home sickness. The fundamentally decent Stephen is appalled at the way that Jock let her down (made worse by the fact that she later displayed no malice towards Jock). But since Stephen can’t bring himself to publicly reproach his new boss, Jock’s little mistake is brushed under the carpet and life goes on.

Except, of course, this has served to bind Stephen just a little closer to Jock …. 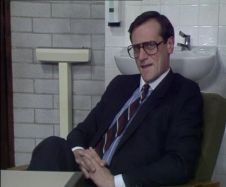