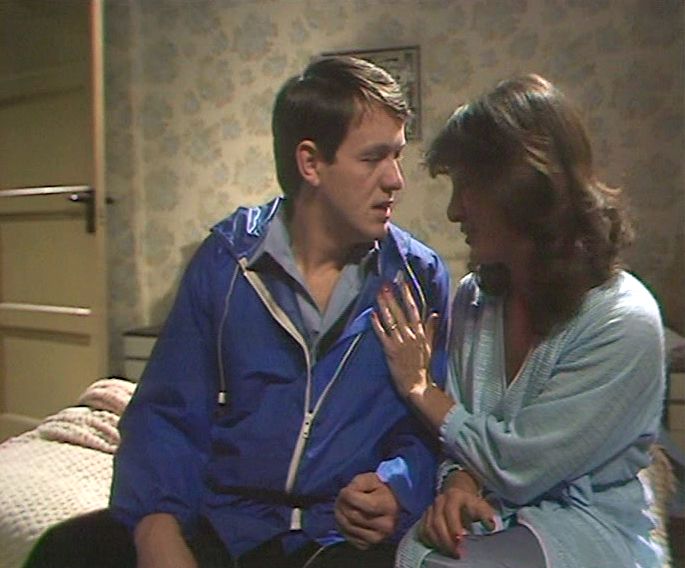 Having served a ten year sentence for armed robbery, Mick Grainger (Ron Bain) is heading home. He has a wife, Judy (Rachel Davies), waiting for him, but his reintegration into society isn’t straightforward. Especially since some people, such as Joe Beck, aren’t prepared to forgive or forget ….

There’s not a great deal of film in one, but what we do have is used very effectively. The episode opens with a panning shot, moving from a group of industrial chimneys to a bleak block of flats which are carved unappealingly out of concrete. The eerie silence is a signifier that it’s early in the morning and as the camera closes into one specific flat, we see that Chris Evans (Kevin Whately) is preparing to take his leave of Judy.

It’s plain that they’re in a relationship – which is a complicating factor since her husband is due home any day. The fact that Evans is a constable at Hartley nick adds another layer of complexity to the problem.

An early screen credit for Kevin Whately, his role in the story isn’t terribly large (although it’s an important one – especially the closing scene). Many series tended to feature one-off characters, like Evans, who have clearly been around for some time but were never actually seen by the viewers either before or after their single appearance. This always feels less than satisfactory and since Evans is a fairly peripheral character for most of the story there seemed to be little value in making him a policeman. Given that he hardly interacts with any of the regulars during the bulk of the story – apart from one scene where he asks Jean for a transfer – he could have worked anywhere.

One of the striking things about Coming Back is that it’s not afraid to use silence. Mick’s eventual return home to Judy is a halting affair – punctuated by awkward gaps in their conversation. As we progress through the episode, various people have their say about him – Judy’s employer Mr Lawrenson (Bernard Gallagher) considers Mick to be a dangerous man whilst Joe Beck can’t forgive him for attacking one of his best friends on the force (Mick’s assault meant that the officer was forced to retire due to ill health).

And yet Mick now hardly seems to pose a threat to anyone. True, he’s capable of getting drunk and riled, but his health issues (a major operation in prison has hit him hard) seems to have curtailed his previous wild spirit. Of course, we have no way of knowing just what sort of a character he really was before this current prison spell. Joe fills Jean in with Mick’s career highlights – but given Joe’s obvious bias it’s possibly not surprising that he delights in painting as black a picture as possible.

Crime is not central to Coming Back. Joe might be convinced that Mick is already planning another job, but that’s not the case. In fact, the only crime occurs in the last minute or so (and doesn’t concern Mick). Instead we have a character based drama which just as easily could have been a Play for Today or an Armchair Theatre. Ron Bain and Rachel Davies make for an intriguing pair – the dynamic between their two characters shifts somewhat during the course of the fifty minutes – and they’re the ones who really drive the episode along.

The Hartley regulars have no interaction at all with either Mick or Judy – only Mr Lawrenson bridges the gap (a nice performance by Bernard Gallagher as a rather pompous and self-important type). There’s some decent character building moments at Hartley nick though – we see Jean relaxing with the others in the kitchen, mock annoyed at George because he had the temerity to call her a Liberal! George also has a lovely line after he turns his nose up at the news that a new wine bar’s opened in town. He sorrowfully shakes his head and declares that Hartley’s becoming more like Morecambe every day ….

The aforementioned wine bar is where Jean and Tom head off for lunch, although it’s something of a stormy meal. Their argument – mainly about whether they should take Jean’s (unseen) mother on holiday with them – continues when they get home. So far Tom’s been a rather placid character, so it’s not a bad thing to see a bit more spark from him.

Those who enjoy the rough and tumble, cops and robbers, aspect of police series won’t find much of interest here (this one couldn’t be further removed from The Sweeney). But as a piece of kitchen sink drama, Coming Back stands up very well.

One thought on “Juliet Bravo – Coming Back”