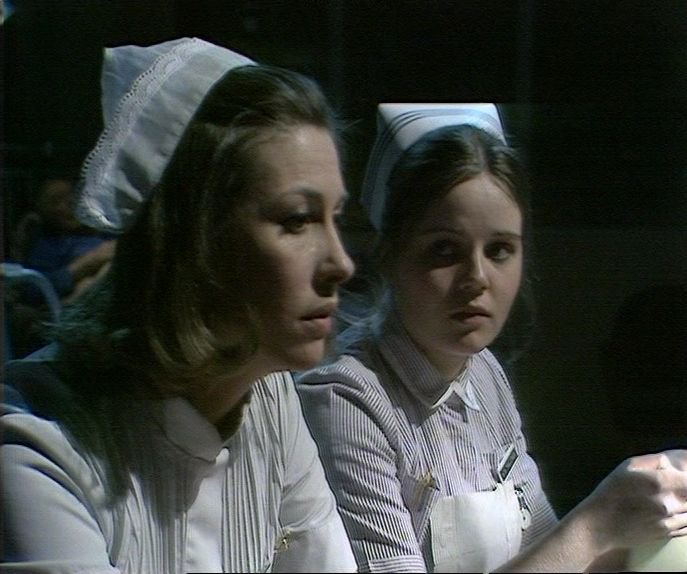 Having previously mostly acted as Jo’s confidant and sounding board, Nights is the first time that Ruth’s character has been placed centre-stage. Given the night-time setting, there’s a very different feel to this episode than previous ones – the subdued lighting and the general peace and quiet of the ward contrasts sharply with the bustle of the daytime environment.

Ambient noise is used effectively to reinforce this difference. The regular stream of traffic outside (presumably St Angela’s is close to a main road) is a good example – no doubt during the day it would be drowned out by the general hubbub of hospital life.

We check in on several patients (considerately they all wake up at different times, meaning that Ruth can attend to each of them in turn). All of these encounters – bar one – add a little extra colour to the episode but aren’t key. Mr Summers (Ken Parry) is first. Complaining of being hot (and also the fact that he’s hooked up to a very bulky looking monitor) he’s fairly easily dealt with. His mildly cantankerous nature does give Ruth an early opportunity to demonstrate her winning personality skills though.

When Mr Pointer (Richard Butler) heads out of the ward at one thirty in the morning (a regular occurrence for him) it seems that the audience is being invited to assume it’s a toilet related issue. But in fact he’s just nipping off to make a cup of tea – since his working life has been spent working the night shift, his body clock now operates differently from everyone else.

The arrival of Mr Wallace (Anthony Dawes) is an interesting moment. The only brief film insert during the episode occurs during the first few minutes when we see an ambulance pull up with yet another patient (presumably Wallace). This subconsciously suggests that Wallace is going to be a key figure, but it doesn’t turn out that way. Once he’s been loaded into bed he’s pretty much forgotten about.

The conflict in today’s episode is generated by Ruth and Audrey Steiner (Myra Francis). Audrey might be the senior, but Ruth is contemptuous of the fact that she’s an agency nurse. Ruth believes that her experience of the ward should trump Audrey’s greater knowledge of nursing (she also has a simmering resentment because Audrey is paid more). Nothing that Audrey does is particularly terrible, but decent drama is generated via her clashes with Ruth. Another plus of the night setting is the fact that even when they have an argument it has to be done sotto voce in order not to wake the patients.

During her break, Ruth discusses the dreaded Audrey with Sita and Sandra Ling (Angela Bruce, making her Angels debut). Sandra makes most of the running here – disagreeing with Ruth by pointing out the difficulties that an agency worker has to face (mainly the fact that they’re never in one place long enough to make friends). But this flashpoint is brief and there’s a later short scene which makes it plain that their friendship is unaffected.

The arrival of Dr Frank Crozier (John Duttine) breaks the routine. Duttine is another of those Angels performers who could have easily returned again as the same character, but sadly didn’t. Something of a letch (Crozier’s first action is to squeeze Ruth’s bottom) he’s obviously used to wrapping the nurses around his little finger. He later asks Ruth to rustle him up an omelette, even though he knows that nurses are strictly forbidden to cook (because of this she later fouls foul of the formidable sister). But Ruth’s not upset and her weekend date with Crozier remains unaffected.

The death of Mr Marshall (John Stuart) ends the episode on a bleak and reflective note. An elderly man with severe breathing problems, his poor health is stated throughout, but it still comes as a shock when he suddenly expires. Angels‘ first patient death, it’s all the more effective for the matter of fact way it’s handled. The pain felt by Ruth is obvious (losing a patient is always hard) but as Crozier tells her, you simply have to develop a hard shell and move on.

The travails of this particular night shift is one reason why Ruth and Audrey find some common ground by the end of it (Audrey’s offer of a cup of tea is something of an olive branch). Like Duttine, it’s a shame that Francis’ character was just a one-off.

Alan Janes’ script is economical with its dialogue (understandable during an episode set at night). Another strong episode though, and I look forward to seeing what he does with his next (Accident, from series two). 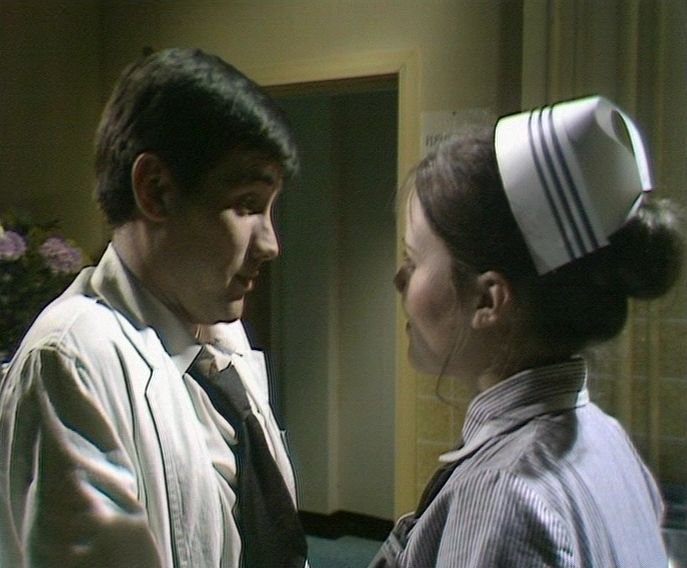