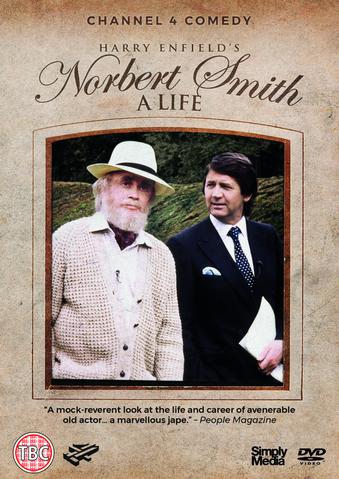 Harry Enfield (b. 1961) first came to prominence in 1986 on Channel 4’s Saturday Live. The two characters he created with Paul Whitehouse – Stavros and Loadsamoney – quickly became public favourites, especially the obnoxious Loadsamoney. But since they only offered limited possibilities for development it wasn’t surprising that Enfield eventually tired of them and moved onto other projects.

In 1990 he would debut Harry Enfield’s Television Programme on the BBC, but just prior to this Norbert Smith: A Life aired on Channel 4. It was the first time that his skill with multiple characters within the sketch format had been given free reign and therefore is a key moment in his early career.

The format is simple. Melvyn Bragg is interviewing the venerable British actor Sir Norbert Smith. In-between the rambling interview sections are clips from the great man’s many films (dating from the 1930’s up to the present day). This is obviously just a device to stop the programme from appearing to be nothing more than a series of film sketches (which it clearly is, but since everything works so well I’m not complaining).

The inspiration for the programme would have been obvious to most people at the time. Broadcast in 1983, Laurence Olivier: A Life found Britain’s greatest theatrical knight in conversation with Melvyn Bragg. In some ways Norbert is a wicked parody of the 1983 original, even down to the aged Norbert’s appearance (he’s the dead spit of the elderly Olivier). But although there’s a visual similarity (and some crossover in films, such as Hamlet) Norbert Smith isn’t a pastiche of Olivier’s career – the subject of this programme was an actor much lower down the food chain.

His film debut – appearing alongside Will Silly in Oh, Mr Bankrobber! – is a case in point. This first parody sets the benchmark for the rest of the programme – it’s a wonderfully observed Will Hay pastiche, capturing the tone perfectly (the crosstalk and ever-increasing verbal confusion is spot on). It’s visually very appealing too, with just the right amount of dirt applied to make it look like a fifty year old film (plenty of hiss on the soundtrack as well).

Another example of this attention to detail can be seen in Lullaby Of London. A 1940 American film featuring oodles of British clichés, not only does the picture have that odd washed-out colour tone of the era but the sound is a little tinny as well. Josie Lawrence joins Harry and a fair number of extras for this extravagant song and dance number.

The Noel Coward inspired Hamlet is another stand-out section – especially since it so closely apes the visuals of Olivier’s own classic version. The Brief Encounter skit (featuring Felicity Montagu) is given a little extra spin when it’s revealed that their over-earnest performances are only in respect of an advert for Sudso washing powder (which has the classic slogan “it washes clothes”).

It’s Grim Up North (1962) is a typically depressing kitchen sink drama, but the same year Norbert would also take on a very different role – that of the father in Keep Your Hair On, Daddio – so clearly Norbert was an actor of some versatility. And around this time an alcoholic Norbert found himself ruthlessly probed on Head to Head. “Why are you so hopeless? Forgive me for saying this, but you’re a complete alcoholic and a lousy actor”. The unmistakable tones of Geoffrey Chater help to make this Face to Face homage even more enjoyable.

There are many other gems scattered throughout (such as Rover Returns Home where Norbert shares the screen with a young Michael Caine) but rather than listing them all (and spoiling the gags) I’ll mention just one more. This is easily my favourite – Carry On Banging. Featuring three Carry On stalwarts (Barbara Windsor, Kenneth Connor and Jack Douglas) it manages to pack a breathtaking number of innuendoes into just two minutes.

“Now listen, we want you to pull them down and if you don’t, we will”.

“Those unsightly erections of yours are a danger to us all”.

“That man there, he threatened to give me a big stiff one”.

And the killer line ….

“Let us all have a little discussion, where you can all put over your points of view. Yes, let’s have a mass debate”.

With Paul Whitehouse not contributing, Enfield co-wrote Norbert Smith with Geoffrey Perkins, no slouch himself as a writer or performer. And although it only runs for 47 minutes, there’s so much packed in that it seems to be longer.

It’s a pity that there’s no special features or additional footage, which means that whilst this is a treat, it’s a very short one. But given the quality of the programme it’s certainly something I have no hesitation in recommending. A comic gem, it’s a joy from beginning to end.

Norbert Smith: A Life is released by Simply Media on the 16th of July 2018. It can be ordered directly from Simply here. Quoting ARCHIVE10 will apply a 10% discount.