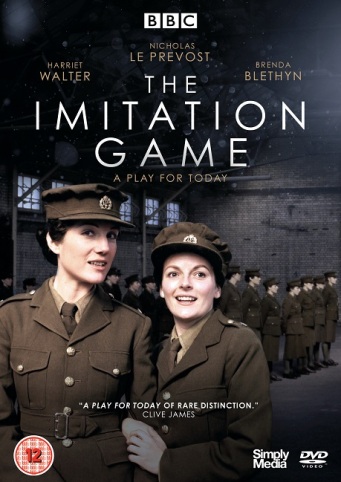 The year is 1940. Having previously worked at a wireless listening station dealing with coded Enigma transmissions, Cathy Raine (Harriet Walter) arrives at Bletchley Park – the home of the Enigma machine and the nerve centre of Britain’s code-breaking efforts.

Disappointingly, she finds her duties are very mundane – making coffee and cleaning – but there are compensations. She becomes friendly with a Cambridge mathematics don called John Turner (Nicholas Le Prevost) and the pair go to bed.  But their love-making ends badly with Turner blaming Cathy for the debacle.  Shortly afterwards, Cathy is discovered in Turner’s room reading top secret documents and this act leads to her imprisonment ….

Originally broadcast on the 24th of April 1980, there’s a very modern feel to this Play for Today. Cathy is determined to break free from her stifling home life and domineering father (Bernard Gallagher).  Most girls have “done their bit” by going to work in the local munitions factory, but Cathy has set her sights a little higher and so joins the ATS.

During her initial training she befriends Mary (Brenda Blethyn – making her television debut) and the pair become close.  That they and the other ATS girls are encroaching into male territory is demonstrated after the pair dare to pop down to the local pub by themselves for a drink. This invasion of a male dominated province doesn’t go down well and the landlord’s attempt to move them on ends in an ugly scuffle.  Following a severe reprimand she’s moved to Bletchley Park – an ignominious reason for her transfer.

If Cathy was – apart from Mary – isolated before, then this feeling only increases when she takes up her duties at Bletchley.  So it’s possibly not surprising that she responds so eagerly to the handful of kind words flung her way by Turner.  Based loosely on Alan Turning, Turner is unable to perform when the pair go to bed and he quickly decides that she’s the guilty party.  “You wanted to humiliate me and you’ve succeeded. You hated your own job and you’re jealous of me for mine”.

Ian McEwan had originally wanted to write a play about Alan Turing and the Enigma machine but found information on both was rather scarce, so instead he turned his attention to life at Bletchley Park. Despite the fact that women formed around 75% of the workforce, he learnt that they were very underrepresented in key positions (although research undertaken during the last few decades has somewhat revised this viewpoint).

Cathy’s downfall begins at the listening station after she becomes frustrated that she doesn’t understand why the coded messages she’s working on are important. “All of the women know nothing, some of the men know everything”.  Although it’s easy in one way to understand her point of view, does she “need to know” in order to do her job? She doesn’t, but it’s her desire to see the bigger picture which eventually leads her to Turner’s Enigma notes.

The Imitation Game was only Harriet Walter’s second television credit, but she belied this lack of screen experience with a beautifully judged performance (Cathy’s closing monologue is a particular highlight).  A fair few familiar faces make appearances, some more fleeting than others. Patricia Routledge is perfectly cast as a hearty ATS officer whilst Geoffrey Chater, always at home when tackling authority figures, plays to type as the interrogating Colonel.

Bernard Gallagher is terrifically unbending as a martinet father who clearly wouldn’t be averse to a German invasion (at one point Cathy ironically suggests he should put on his black shirt). Simon Chandler is also very good value as the supremely irritating Tony, Cathy’s long-term boyfriend, who’s more than a little put out to learn that she’s decided to join the army (regarding the ATS as something of a den of iniquity).

Running for 92 minutes, The Imitation Game was one of a number of interesting Play For Today‘s directed by Richard Eyre during the late seventies and early eighties (hopefully over time they might all make it onto DVD). Thanks to Harriet Walter’s vulnerable but steely performance as Cathy (along with the strong supporting cast) this is an absorbing play.

The Imitation Game is released by Simply Media on the 1st of October 2018, RRP £9.99. It can be ordered directly from Simply here.