Skip to content
HomeDoctor Who – The Reign of Terror. Episode Five – A Bargain of Necessity 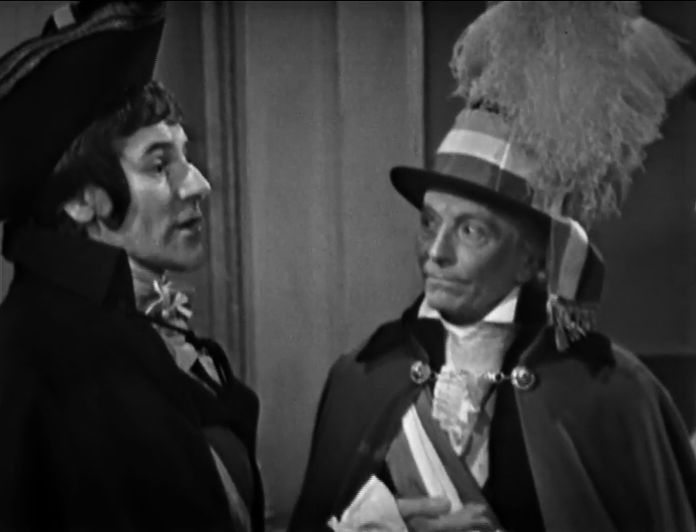 At the end of the previous episode Ian was captured by Leon, who reveals that he’s an agent of the Revolution. “I’ve been loyal to the Revolution from the beginning. If you’d known what France was like six years ago, before the Bastille, you’d understand. France will never be anything until we’re rid of these high-born leeches who’ve been sucking the life-blood of France for so long.”

Although Leon could viewed as a villain, like Robespierre he’s convinced of the right of his actions. And whilst he chains and threatens Ian, there’s the sense that he does so reluctantly. This scene is open to various interpretations though – maybe Leon is a skilled manipulator and tells Ian exactly what he thinks he wants to hear. Or is his desire to spare his life genuine?

It’s no surprise that although Ian is restrained and several menacing guards are present, there’s no attempt to torture him for the information which Leon is convinced he has (Jules appears and kills Leon before this happens). Saturday tea-time back in 1964 wouldn’t have been the place for explicit scenes of suffering (which makes the subject matter of this serial an odd one to have chosen).

The dramatic highlight of the episode, indeed the entire serial, occurs when Barbara is told of Leon’s death.

IAN: It was the only way, Barbara.
JULES: He deserved to die. He was a traitor.
BARBARA: What do you mean, he was a traitor?
IAN: When I got to the church, he turned on me. He was going to kill me.
JULES: He betrayed us, Barbara.
BARBARA: He was a traitor to you. To his side he was a patriot.
IAN: Barbara, we’ve taken sides just by being here. Jules actually shot him. It could just as easily have been me.
JULES: And what about Robespierre? I suppose you think ….
BARBARA: Well just because an extremist like Robespierre
IAN: Oh, Barbara, Jules is our friend. He saved our lives!
BARBARA: I know all that! The revolution isn’t all bad, and neither are the people who support it. It changed things for the whole world, and good, honest people gave their lives for that change.
IAN: Well, he got what he deserved.
BARBARA: You check your history books, Ian, before you decide what people deserve.

It’s a sparkling scene for both William Russell and Jacqueline Hill and offers a rare opportunity to see Ian and Barbara at loggerheads. Although Barbara’s view of Leon is no doubt coloured by her appreciation of him as a man, the point she makes (Leon would have been viewed as a patriot by his own people) is a valid one. But Ian’s retort that they’ve chosen sides and Leon had to be viewed as an enemy is equally valid. By showing Leon to be a cultured, well-educated man who also happened to believe that the overthrow of the ruling elite was morally justified, Spooner’s script has a level of complexity which wasn’t always present in Doctor Who. Generally, during this era of the series goodies and baddies tended to be painted in broader brushstrokes (although the historical stories did seem to offer more scope for nuanced character studies).

The Doctor spends the episode manipulating the hapless jailer in order to obtain Barbara and Susan’s release from prison. It provides a spot of comic relief which counterpoints the darker theme of Leon’s death. But it looks as if the Doctor hasn’t quite been as clever as he thinks – as we see that Lemaitre is still the one pulling the strings ……