Skip to content
HomeDoctor Who – The Romans. Episode Two – All Roads Lead To Rome 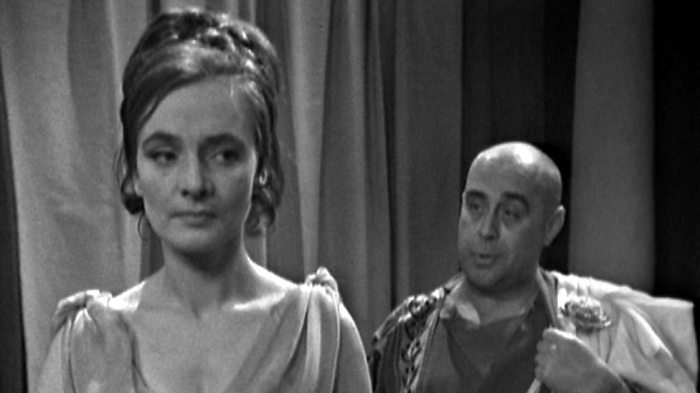 Although the main plot of The Romans is straightforward enough, the various palace intrigues which bubble below the surface are slightly more opaque.  At the start of this episode it’s confirmed that the Centurion we met in the previous episode wanted Maximus Pettulian dead and he’d commissioned a mute assassin called Ascaris (Barry Jackson) to do the deed.  The joke being of course that Ascaris is unable to tell him that he’s already killed Pettulian once!

So he has to kill him again (in the shape of the Doctor) but the Doctor offers more evidence that he’s handy in a scrap.  The fight scene between Ascaris and the Doctor is a comic highlight of the episode and although it was designed to put as little stress onto Hartnell’s shoulders as possible, it still works very well.  When Vicki enters the room, Ascaris has clearly had enough and heads for the nearest window.  The Doctor’s rather disgruntled.  “Young lady, why did you have to come in and interrupt? Just as I’d got him all softened up and ready for the old one, two.”  Lovely stuff.

And what of Ian and Barbara?  Ian’s been sold as a galley-slave and quickly strikes up a friendship with Delos (Peter Diamond).  Although Diamond was a bit-part actor, he spent most of his time working as a stuntman/arranger (amongst his numerous film credits was the first Star Wars movie).  Delos performs much the same function as Larry did in The Dalek Invasion of Earth – he’s someone for Ian to talk to as he searches for the others.  Diamond’s a solid presence though and manages to be something more than just a line-feed.

Barbara’s landed on her feet as she’s been bought by Tavius (Michael Peake) and brought to the court of Caesar Nero.  Tavius is an interesting character – he’s someone who has an agenda of his own (which is connected to Maximus Pettulian) although his ultimate aims remain nebulous for a while.  And is he Barbara’s friend or foe?  Peake had an imposing physical presence and would clearly have found no difficulty playing the heavy, but we’ll see that there’s more to Tavius than meets the eye.

Nero (Derek Francis) makes an impressive entrance (he belches loudly).  “Royal felicitations” murmurs the Doctor.  Amongst a host of sparkling performances, Francis’ is the jewel in the crown and his byplay with Hartnell is delightful.  From their first meeting, the running gag of Maximus Pettulian’s skill (and the Doctor’s total lack of skill) as a lyre player is established.  Nero is keen to hear Pettulian play, but the Doctor manages to cleverly sidestep this potentially awkward moment by asking Nero to go first.  Another nice comic moment occurs when Nero calls for a stool – the Doctor begins to sit down on it, but it quickly becomes clear that Nero wanted it to balance his leg upon, causing the Doctor to rise again with a disgruntled expression!