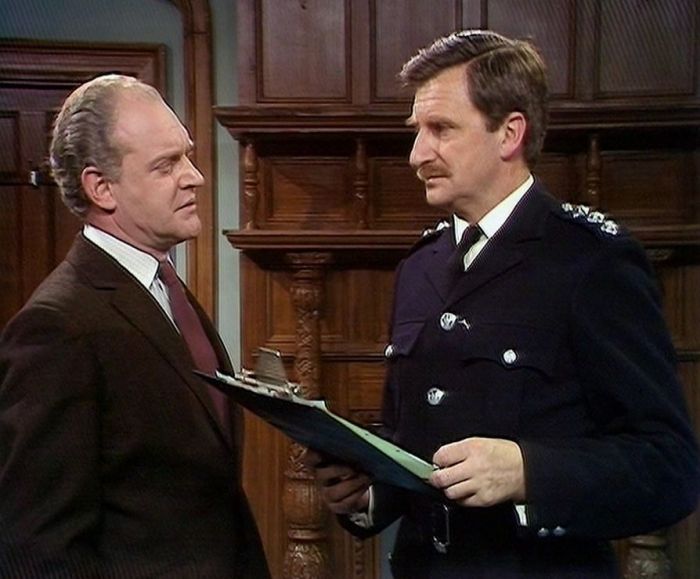 Despite the title, the primary focus of New Broom isn’t about establishing John Watt as the new Task Force boss.  Instead, it centres around a murder investigation, following the discovery of a severed arm at a rubbish dump ….

This is an unusually macabre plot element for the series and although the rest of the dismembered torso is mainly discussed and not seen, towards the end of the episode the murderer does reveal the only other body-part still in existence (a hand).

After the sensationalist opening, New Broom settles down into a pattern of pure routine.  It’s good to see a number of extras in uniform swelling the ranks in the incident room today. In some of the previous episodes we rarely saw any other police officers apart from the regulars, which tends to give the unfortunate impression that the Task Force is comprised of no more than around half a dozen officers.

John Franklyn-Robbins makes his second appearance as Chief Inspector Bill Adler. Having only skirted around the perimeters of the story in his previous episode, he’s much more central here.  A former detective, various indiscretions several years back (mainly concerning women and alcohol) have seen him reduced in rank, returned to uniform and forced to plough a frustrating furrow as a desk-bound administrator.

He’s never less than totally thorough, but it’s plain that jobs such as organising the furniture for Watt’s new office isn’t quite the sort of thing he joined the police force for.  This subplot is the episode’s one concession to portraying Watt as the new broom.  His office décor is very different from Charlie Barlow’s – Watt favours a minimalist approach (featuring strikingly modern chairs and desks) with the result that Cullen, passing by, first of all believes that there must have been a mix-up with the furniture delivery ….

Adler is later seconded to assist the murder investigation and it’s his dogged and painstaking approach (plenty of sifting of facts and staring at blackboards) which leads them to a suspect, Edward Harrison (Willie Jonah).  Adler will return in most of the remaining episodes on the third and final Pidax DVD set and I’m looking forward to seeing how his character develops.

There’s an intriguing relationship teased out here between him and Watt, which bodes well for the future.  Adler desperately wants to get back to being a detective, but Watt is content to keep him where he is for now (Adler offers to take a crack at Harrison, but Watt delegates Hawkins instead, much to Adler’s obvious disappointment).

If the majority of New Broom is interesting without being especially gripping, then the late interview between Hawkins and Harrison raises the temperature somewhat.  A good two-hander, it’s one of the highlights of the episode (the development of Adler’s character being another).

Elsewhere, Frank Windsor effortlessly slips into place as the new focus point of the series.  John Watt’s plain, no-nonsense style hasn’t really changed since he first appeared in Z Cars and New Broom makes it plain that business will carry on as usual.