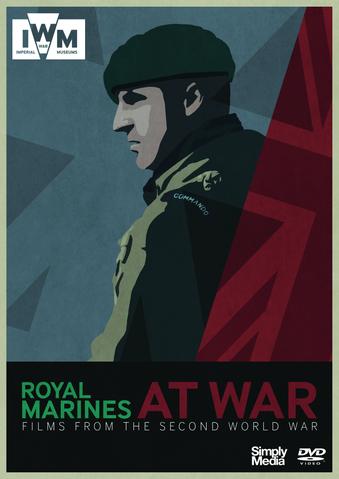 Commando: The Story of the Green Beret was a drama documentary produced in late 1945. Sponsored by the Admiralty, it follows the progress of Fusilier Gordon Blake as he undergoes the rigorous training schedule designed to turn him into a Commando (“the soldier of the future”).

After an establishing voice over, we open in a barbers shop where Gordon and his pal, ‘Stiffy’ Porter, are both having a shave.  There then follows some gloriously stilted dialogue as Stiffy and Gordon argue about the merits of this new fighting force. Gordon mutters that “I’ve been trying to drive into my mate’s thick head that the Commandos aren’t a lot of fancy bruisers” and over the next few minutes manages to argue his case pretty successfully.

The barber also pitches in with some wise words of wisdom and shortly afterwards Gordon sets off to begin his training at the Deal barracks in Kent.  Early on he attends a lecture from a Commando Captain who warns the new recruits that this isn’t the place to find “cheap glamour”.

As the hour continues we see Gordon tangle with the Tarzan course (“talk about Strength-through-Joy! I’m a new man already!”), face gruelling cross-country treks, tackle the essentials of unarmed combat and learn about the various Allied and Axis weapons he may well have to handle.

By dropping Gordon (who was presumably an actor) into the middle of a real Commando unit, the film is able to keep the interest level up as we follow his progress. There’s a varied mixture of newly shot footage and archive combat material and this is topped off with a typically jolly soundtrack (played by the Royal Marines band of course).

At just under an hour it’s the main feature and – notwithstanding some of the rather forced sounding dialogue early on – is a well put together piece of army propaganda.

Also included are three shorter documentaries, beginning with Rough Weather Landing (ten minutes). An experiment by No 4 Commando, it demonstrates how they’re able to launch a surprise attack on a seemingly impregnable coastline.  It may have been just off Cornwall – so they were under no threat from the Nazis – but the natural elements they had to face were dangerous enough ….

Jungle Mariners runs for fifteen minutes and revolves around the dangers faced by Marines in the Far Eastern jungles.  It’s another prime slice of propaganda, showing our boys happily interacting with a group of smiling natives as they all tuck into some nice slices of pineapple (elsewhere, things are a little more hairy of course). Jungle Mariners looks to be a mix of real footage and staged material, with multiple voice-over participants and the usual stirring soundtrack.

By Sea And Land – A Royal Marine Patrol In Normandy rounds off the disc.  Just under thirteen minutes, this short documentary follows the progress of a group of Marines as they attempt to maintain their position in occupied Europe following the D Day landings.  It’s another fascinating piece, full of interesting footage.

With a total running time of around 100 minutes, Royal Marines At War is another strong title released by Simply in association with the Imperial War Museum.  With Commando taking prime position, there’s plenty of worthy material to be found across all four documentaries.

Royal Marines At War has an RRP of £9.99 and can be ordered directly from Simply here. Quoting ARCHIVE10 will apply a 10% discount.