Skip to content
HomeDoctor Who – The Crusade. Part Four – The Warlords 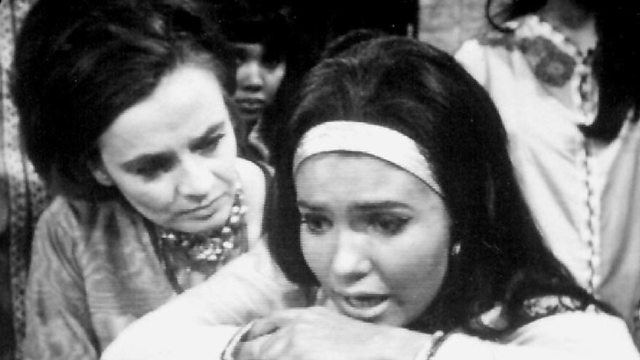 If the previous three episodes of The Crusade tended to concentrate on the court intrigue at both Richard and Saladin’s camps, then The Warlords offers a sharp change of pace.

Saladin, Saphadin and Joanna are all absent and Richard himself only features in a single scene.  His brief appearance is partly to reassure the Doctor and Vicki that he knew they didn’t reveal his plan to Joanna (he was aware it was the Earl of Leicester, but confesses it was politically expedient not to confront him directly).

The scene also allows the Doctor to inform Vicki and the viewers at home that Richard would, ultimately, be unsuccessful in his aims.  He may only have a short amount of screen-time in The Warlords, but once again Julian Glover is unforgettable.

DOCTOR: There is something important, sire. If you are able to defeat Saladin in this battle, can you hold the city?
RICHARD: Win the battle, lose the war. The greatest fear we have. We’ve come so close. I must see Jerusalem. I must.
DOCTOR: You will, sire.
RICHARD: You think so?
DOCTOR: I am certain, sire. And when you look upon the city itself, you will be able to find the answer to the problem of this war. May we now take our leave, sire?
VICKI: Are we going back to the ship?
DOCTOR: As fast as our legs can carry us, my dear.
VICKI: Doctor, will he really see Jerusalem?
DOCTOR: Only from afar. He won’t be able to capture it. Even now his armies are marching on a campaign that he can never win.
VICKI: That’s terrible. Can’t we tell him?
DOCTOR: I’m afraid not, my dear. No, history must take its course.
(The Doctor and Vicki leave.)
RICHARD: Help me, Holy Sepulchre. Help me.

Ian (still on his mission to find Barbara) has unfortunately run into the villainous Ibrahim (Tutte Lemkow) who has devised a novel way to discover where Ian’s money is stashed.

A little pot of honey, made from pounded dates and very, very sweet. There, my lord, a little bit on your wrists and a little bit on your chest. Now, over there is a hungry home, full of ants that go wild for date honey. We must be generous to them. Lay a little trail across the sand, like this. And I will sit in the shade of the trees and dream of all the treasures I will get when the ants discover you. If you crane your neck around, my lord, you will soon see what you take to be a black line along the honey. Why, you will be able to see it getting closer and closer. My little ones! Such ecstasy!

Lemkow is good value, especially when Ian turns the tables on Ibrahim and forces the little thief to take him to El Akir’s palace.  From then on, Ibrahim becomes servile and keen to assist Ian (although there’s no doubt that he would be happy to change sides again at the first opportunity).

At the start of the episode Barbara is once more in El Akir’s clutches – although yet again she’s able to escape from him fairly easily.  This unfortunately doesn’t do the character of El Akir any favours – and his limited screen time during all four episodes does ultimately means that he’s not one of Doctor Who’s most tangible or memorable villains.

El Akir is more of a plot-device (initiating the story by attacking Richard and his friends, kidnapping Barbara to ensure that the Doctor can’t leave) than a fully-rounded character.

If you compare him to the likes of Tegana or Tlotoxl then he seems even more underwritten, although had this story been a six-parter there might have been more scope to develop him. As it is, he seems to be denied even a particlarly impressive death scene as the soundtrack suggests that Haroun quickly dispatches him quite abruptly.

Since Haroun rescues both his elder daughter Maimuna and Barbara it unfortunately rather negates Ian’s mission (he turns up shortly afterwards).  It’s a little surprising that Ian doesn’t get the heroic fight with El Akir – particularly since William Russell was well able to handle a sword (he had previously starred in The Adventures of Sir Lancelot).

But clumsy though this moment is, it does give us a nice final scene as Ian is able to spirit the Doctor and Vicki away from under Leicester’s gaze.  Leicester watches in horror as the four time-travellers disappear in the TARDIS and resolves to “not speak of this. Let this story die here in this wood or we’ll be branded idiots, or liars. Poor Sir Ian, brave fellow. Spirited away by fiends. What dreadful anguish and despair he must be suffering now?”

If The Warlords doesn’t quite match the scale and sweep of the previous three episodes (and who are the titular Warlords anyway?) overall The Crusades is still a first class story which thanks to the cast and Douglas Camfield manages to transcend the limited budget and studio-space and produce something quite magical.

If the two missing episodes are never recovered, maybe one day animated versions can be produced – as it’s a story that certainly deserves to sit on the shelf alongside the rest of the second season.