It’s panto time in the Street (Cinderella). This means several things, firstly that poor Miss Nugent is an absolute bag of nerves. Mr Swindley, cast in his familiar role of impresario, is implacable though – giving her, and the rest of the players, a very stirring speech before the curtain goes up.

Arthur Lowe was, of course, so good at this sort of comic business. And speaking of comic business, it’s easy to imagine that the way Swindley recoils after almost bumping into Ena following his impassioned homily was an unscripted extra.

Ena’s not been called upon to tread the boards and neither has Minnie.  But Minnie does have a vital role – she’s the prompt.  I love the fact that she’s spent all night memorising the play from start to finish, meaning that she can now recite everyone’s lines perfectly.  Another nice moment is the tender way Ena wakes up the slumbering Minnie – for all her bark, there’s clearly a caring side to Mrs Sharples.

The regulars have a packed hall of children to play to.  The camera often cuts away to their rapt faces and it seems like they were genuinely enjoying themselves (either that or they were very good actors).  The panto is a real time capsule of the period, with numerous pop culture references dropped in (most notably The Beatles and Ready Steady Go).

Both Elsie (Prince Charming) and Miss Nugent (Dandini) display fine sets of pins whilst Dennis is endearingly gormless as Buttons (not much acting required then) and Lucille makes for a winsome Cinders.

Any guesses who’s playing the fairy godmother? Mrs Walker of course.  There’s a nice moment early on when Annie asks Jack to serve her a crème de menthe (to steady her nerves before the show). Jack slyly enquires if she intends to pay for it, or whether he should simply make a note!

Also stocking up on Dutch courage is Albert, who seems to find the prospect of playing Baron Hardup more terrifying than living through two world wars ….

It’s not a highbrow sort of panto, but nobody wants highbrow at Christmas. We want to see Len get a custard pie in the face, don’t we boys and girls?

The sixth and final 1964 script by Tony Warren (he wouldn’t return to the series until 1967) it’s an episode very low on drama. This isn’t a criticism though – in recent decades it’s become de rigueur for Christmas soaps to ramp up the drama and excitement (and misery).

Today’s episode is a reminder of a simpler time, when all that was required during the festive period was a bit of indulgence on the part of the viewers as we watched our Coronation Street friends letting their hair down and enjoying themselves.

It’s a pity that the telerecording is so grotty, but it’s better to have it in this state than not at all.

Favourite exchange of the episode. Mr Swindley and Minnie are standing in the wings, admiring Lucille’s performance.

Mr Swindley: I wouldn’t mind adding my signature to a letter recommending her for the Royal Society of Dramatic Art.

Minnie: Last time I spoke to her she said she wanted to go on’t buses. 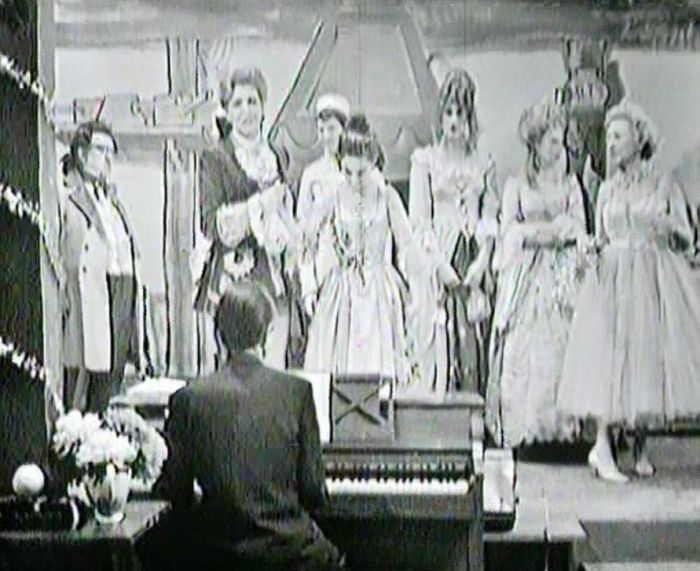