Reports of a mysterious explosion in Antarctica have reached Nemesis. Several scientists from the nearby Scott Base sent to investigate have failed to report back. When Craig and Richard arrive they discover that the scientists have been murdered and also run across General Gomez (Patrick Wymark), the despotic ruler of a small Central American state.

He’s established a secret Antarctic base stocked with atomic weapons and plans to establish his country as a great power on the world stage, unless Craig and Richard can somehow stop him ….

Operation Deep-Freeze is another episode enlivened by a first rate guest star.  I assume most visitors to this blog will be familiar with both The Plane Makers and The Power Game (if not then you should check them out straight away).  Wymark bestrides both series as the amoral businessman John Wilder, giving a performance which has provided me with many hours of entertainment.

He also seems to be enjoying himself today – Gomez is hardly a three dimensional character, but Wymark was always a very watchable actor and his full-throttle turn is certainly a memorable one. Subtle no, memorable yes.

It’s very much a boy’s own adventure today as Richard and Craig get to handle all the action. I like the playful banter during their briefing with Treymayne (Richard promises to bring him back a penguin). It’s little moments like these which ensures their characters are slightly less cardboard than they otherwise might be.

Lashings of stock footage and some fairly effective studio work helps to create the illusion that we’re in Antarctica. Craig, Richard and Hemmings (Robert Urqhart) set out across the frozen wastelands, unaware – to begin with – that Jost (Walter Gotell) is stalking them.

It’s strange that Craig suddenly becomes realises they’re being followed whilst Richard remains ignorant. An example that all three Champions have different strengths and weaknesses when it comes to their powers, or a simple plot contrivance?

Robert Urquhart gives a nice performance as Hemmings (you get the sense that he’s not going to make it to the final reel). Walter Gotell made a career out of playing menacing types (well, apart from Softly Softly Task Force) and he’s typically good value in a fairly nothing role. The strength in depth of the cast is highlighted by the fact that George Pastell, no stranger to playing memorable villians himself, only has the briefest of brief roles.

The story picks up momentum in the last ten minutes or so after Craig and Richard are captured by Gomez. Before this happens, the boys stumble across the General’s stash of atomic weapons and decide it would be a good idea to set a timer and detonate them all. Yes, okay. I’m no expert, but I don’t think this will do the local environment any good.

Forty minutes in and we finally see Sharron. Hurrah! Stuck in Nemesis HQ, she suddenly gets a mental image that Richard and Craig are in danger.Treymane isn’t buying it – he doesn’t quite pat her on the head and tell her not to be so silly, but it’s not too far removed from that.

Her sole scene isn’t really necessary as the plot could easily have moved on without her interjection. Possibly it was decided that Sharron had to be present somehow and this brief scene was the best they could come up with.

For the way that Richard and Craig have started to function as a wise-cracking double act, not to mention Patrick Wymark’s scenery chewing performance, I’ll give this episode four out of five. 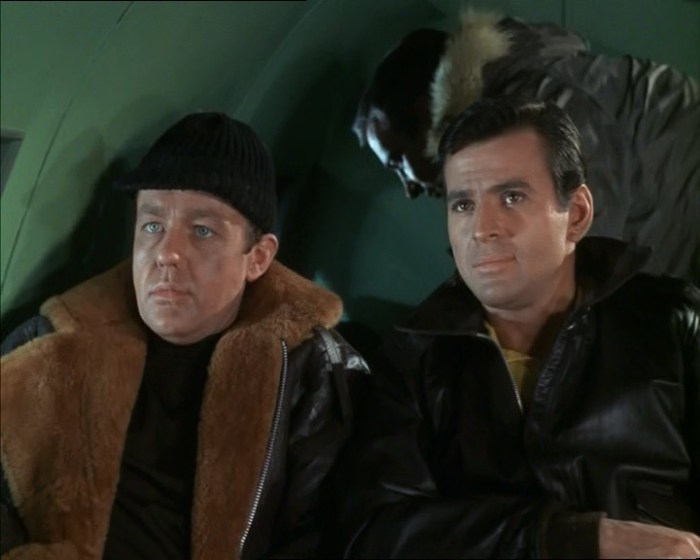 One thought on “The Champions – Operation Deep-Freeze”