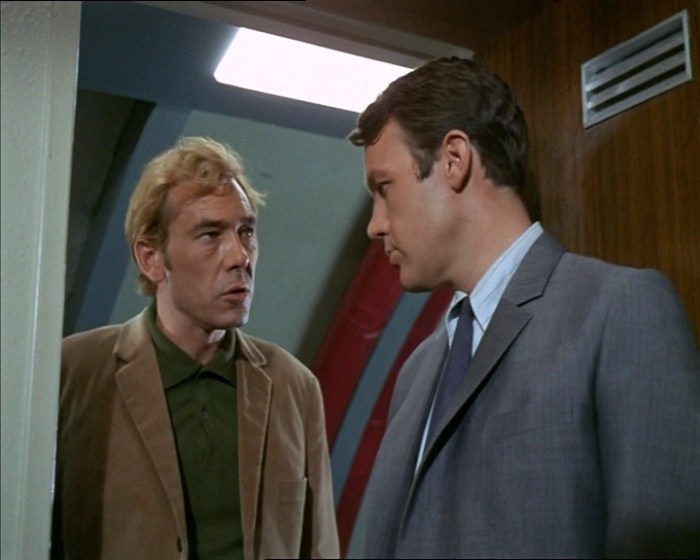 Oh dear, we’re back at the Holy Loch submarine base. Let’s take a deep breath and dive, dive, dive.

Sharron and Richard have been given the job of minding an Eastern European President called Drobnic (Henry Gilbert). Together with his wife (played by Viola Keats) they visit the submarine HMS Weatherby, but tragedy strikes when a bomb explodes which sends the sub to the bottom of the loch.

Whilst Sharron attends to the injured Drobnic, Richard – assuming command following the death of the captain – faces delicate decisions of life and death …

Anybody who’s read my Champions reviews to date will know that I’ve struggled with the series’ previous submarine episodes. But I’m fully prepared to approach this one with an open mind (although I have to confess that my heart sunk just a little when the Nemesis map zoomed in on Holy Loch).

We begin in day for night mode, with a group of shifty types doing shifty things. The pre-credits teaser is rather low on excitement, indeed it’s chiefly memorable for some rather obvious dubbing.

Craig takes this week’s superpowers demonstration. It proves that he can walk up thirty flights of stairs very quickly whilst also carrying a large collection of parcels for a pretty young lady. That’s handy.

Into the story proper, it’s not long before a sweet little model submarine finds itself on the bed of the loch. Whilst Richard and Sharron take stock, I find myself wondering exactly why Drobnic’s enemies decided to sabotage the submarine. Surely there must have been easier ways to kill him?

After all, you’d assume that security at Holy Loch would be pretty tight. But obviously not, since the baddies were able (although we’re not given specifics about exactly how they did it) to pop a bomb on the HMS Weatherby without anybody noticing.

Viola Keats goes into full overacting mode as a hysterical Mrs Drobnic confronts Sharron. Luckily Sharron is more than a match for her and sedates the woman before she gets too annoying. Meanwhile, Richard is clashing with a surly chief engineer called Raven (Mike Pratt). Pratt adds a touch of class to the story – it’s Raven’s conflict with Richard and Sharron that provides the episode with a dollop of drama.

Richard’s priority is to keep Drobnic alive. The way he persuades a reluctant Sharron to operate is noteworthy, as are his clashes with Raven and the rest of the crew. Until the operation is complete he won’t allow them to move the sub – naturally enough, the others aren’t too keen to potentially sacrifice their lives just so Drobnic can live.

That Drobnic is dismissively referred to as a “butcher” hints at a complexity the script doesn’t really possesses. The President is only given a handful of lines before the bomb goes off and none of them address his morality or character.

If Drobnic remains undeveloped, then the same goes for his opponents. More could have been done with both sides, but they’re clearly just story elements designed to create the crisis situation.

Twelve Hours lacks the same sort of slowly increasing claustrophobic terror as, say, the UFO episode Subsmash. Even when the air is getting pretty low, Richard and Sharron greet the news with equanimity. No doubt this is due to their superpowers (while the crew are staggering about, barely able to breathe, our heroes hardly break into a sweat) but it does sap the episode of tension.

This also goes for the way that Sharron needs very little persuading before popping on a set of scrubs and going into major surgery mode on Drobnic. Especially since surgery isn’t really a skill of hers.

The best submarine episode of the series so far (admittedly that’s only a low bar to jump over) this one rates a decent score of three out of five.

2 thoughts on “The Champions – Twelve Hours”