Skip to content
HomeDoctor Who – The Myth Makers. Part One – Temple of Secrets 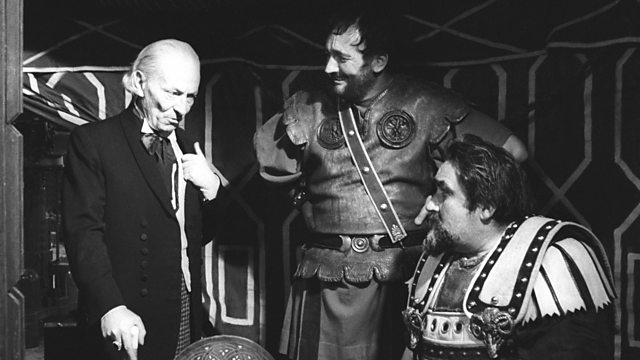 ​John Wiles’ stint as producer was fairly brief and, by all accounts, rather unhappy. His thorny relationship with William Hartnell was a major issue and he was also frustrated that he inherited several scripts (especially The Daleks’ Master Plan) which he would never have commissioned.

The Myth Makers would have been another script commissioned by the previous production team, but it does seem to fit the Wiles mould – since it’s doing something a little different.  We’ve had comedy historicals before – most notably The Romans – but The Myth Makers cranks up the comedy to a higher level.  And then, after three weeks of hi-jinks, everything turns very dark ….

Sadly, John Wiles doesn’t seem to have placed any value in John Cura’s telesnaps as none were taken for the episodes he produced. This is a particular problem for stories like the The Myth Makers as we only have a handful of publicity photographs available to try and conjure up the visual aspects of the serial.

The Loose Cannon recon – complete with numerous photo montages – is a noble effort, but since Donald Cotton’s script is so dialogue heavy (as opposed to say, Galaxy 4, which had long sections of silence punctuated by the beeping of the Chumblies) I don’t find any real hardship in just listening to the audio for this one.

In order to enjoy The Myth Makers you have to accept one basic premise – the Doctor has turned into a buffoon. For anyone who has issues with the more comedic Doctor of the late seventies this may be an issue, but if you can go with the flow then you’ll be able to enjoy one of Hartnell’s best comedy performances.

The Doctor’s startling lack of judgement is shown right from the start, after he observes two warriors fighting an intense battle. He decides to blithely pop his head out of the TARDIS and ask them the way!  When Steven wonders why they’re fighting, the Doctor tells him that he hasn’t “the remotest idea, my boy. No doubt their reasons will be entirely adequate. Yes, I think perhaps I’d better go and ask them where we are.”

The distracting arrival of the TARDIS enables Achilles (Cavan Kendall) to strike down his opponent, Hector (Alan Haywood). Achilles treats the materialisation of the TARDIS as a divine intervention, so it’s plain to him that the Doctor must be Zeus, father of the gods.The

In a script packed with sparkling lines, I love this one from Achilles as he explains his thoughts to the Doctor.  “To Europa, you appeared as a bull. To Leda, as a swan. To me, in the guise of an old beggar.”  It’s just a shame that we have to imagine Hartnell’s offended reaction!

The comedy continues when Odysseus (Ivor Salter) turns up. He treats Achilles with a mocking contempt, demonstrated best after he finds it impossible to believe that Achilles could have defeated Hector in a fair fight.

ODYSSEUS: But what a year is this for plague. Even the strongest might fall! Prince Hector, that he should come to this. You met him here, you say, as he lay dying?ACHILLES: I met him, Odysseus, in single combat.DOCTOR: Oh yes, it’s true!ODYSSEUS: And raced him round the walls till down he fell exhausted. A famous victory!

With the Doctor now in the tender care of Odysseus, who’s not yet sure if he’s a god or a spy, we next meet Menelaus (Jack Melford) and Agamemmon (Francis De Wolff). Menelaus is the reason for this whole expedition, since it was his wife, Helen, who was abducted ten years ago.

Menelaus doesn’t seem terribly bothered about the whole thing though. “It wasn’t the first time she’s allowed herself to be abducted. I can’t keep on going off to the ends of the Earth to get her back. It makes me a laughing stock.”

The wonderful dialogue continues throughout the rest of the episode and Francis De Wolff (who had previously played the much less impressive role of Vasor in The Keys of Marinus) seems, like Ivor Salter, to be having a ball.

Steven heads out in search of the Doctor and finds himself in trouble, whilst the Doctor learns that his temple (i.e. the TARDIS) has, in true cliffhanger fashion, disappeared …..

One thought on “Doctor Who – The Myth Makers. Part One – Temple of Secrets”