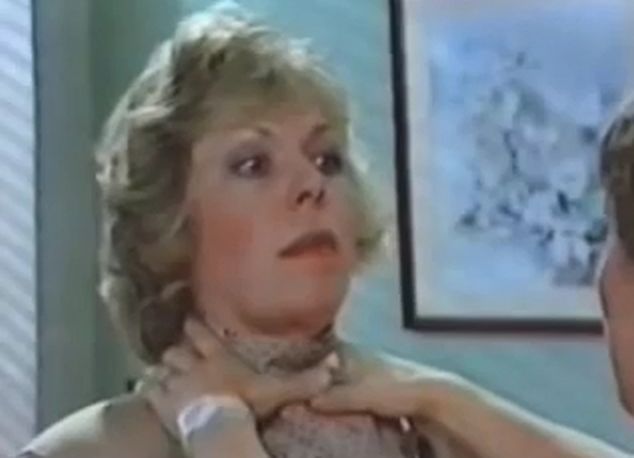 Mauler McCall, along with his willing gang of stooges, is behaving in time-honoured GH bully fashion – extracting money with menaces (a ten pence levy for anyone using the bike sheds).  Clarke and Matthew are two of his potential victims, but have managed to escape his clutches. For now ….

It’ll be interesting to see how these two characters develop this year. Matthew had a good chunk of screentime in S11, but it was all centered around a plotline that appears to have been resolved. Clarke has yet to emerge as a character in his own right – so far he’s served as little more than a line feed for his friend.

Mr Bronson’s eyesight is very keen. At some distance he’s able to spot Justine was wearing outrageous earrings. Ah well, I suppose this proves that he’s not totally obsessed with Danny – he still has time to give others a hard time as well.

It’s noticeable that the friction between Mrs McClusky and Mr Bronson has been downplayed recently. Compare this to 1986 when they were entertainingly at each others throats for multiple episodes. Maybe it was felt that the teacher’s interactions and relationships should take a back seat for a while? That’s certainly something which ebbs and flows over the course of the series. By the mid to late nineties it was back with a vengeance (Mr Robson’s love-life, for example …)

Calley and Robbie are arguing again. You may not be surprised to learn that Robbie’s acting like an alpha male just for a change.

The latest face off between Danny and Mr Bronson is intriguing. Danny has the chance of a work experience placement with Mr Tilley (Niven Boyd) but doesn’t turn up for the meeting. He can’t be located anywhere in the school (he’s working on the mosaic in the swimming pool).

But Mr Bronson obviously knew this, as after he sees Mr Tilley off he heads straight for the pool. So he could have instructed someone to fetch Danny but seems to have decided that since he had skipped registration and lessons he didn’t deserve any favours. So Danny’s placement chance has evaporated – something which will obviously do nothing to help his tottering relationship with Mr Bronson. Although we don’t witness the fallout in this episode, surprisingly enough.

Last time when Vince picked a winning horse for Trev, Trev didn’t put any money on it. This time he’s going to put a bundle on Vince’s next choice. I really don’t think you have to be a mind-reader to work out what’s going to happen next.

Miss Booth is keen to organise self defence classes for the pupils. I like the way she attempts to make her point by putting both her hands around Mrs McClusky’s throat! A rare moment of levity for Gwyneth Powell.

Clarke continues to be terrorised by a (rather friendly looking, it must be said) Alsatian on his paper round. Matthew – riding Clarke’s bike – attempts to draw him off but crashes the bike. That’s a moment low on excitement and the end of episode cliffhanger – Clarke’s bike has been stolen! – isn’t much better.

But I’m prepared to hang on in there and hope that more engaging fare is just round the corner.