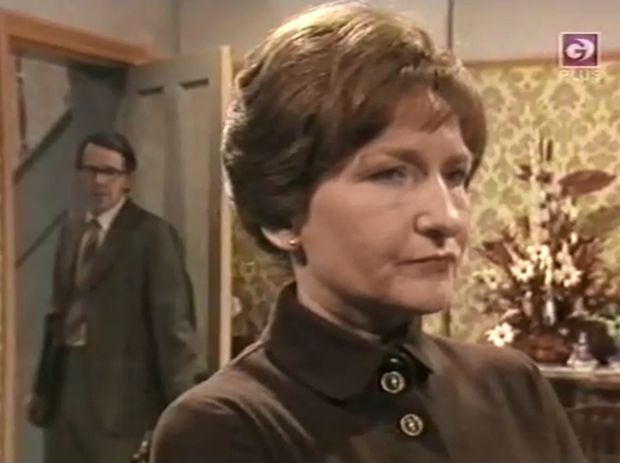 Ernie is in no doubt about who’s fault this is (“bloody Mavis”). Unlike Ernie and Ray, Alf doesn’t have a wife waiting at home for him, but he is a man of local standing – a councillor, no less. So all three have their own reasons for not wanting to be questioned by the police in a seedy backstreet club ….

Meanwhile, Emily and Mavis are having a profound(ish) discussion – with Mavis deciding that she’s never really grown up. That they carry this out whilst washing and drying up the tea things is a nice little homespun touch.

Ernie slinks in, attempting to maintain a casual air. Emily (still none the wiser) indulges in some playful banter whilst Ernie wriggles in a decidedly uncomfortable manner. Lovely playing here from both Eileen Derbyshire and Stephen Hancock (and there’s plenty more to come).

There’s always been some needle between Ray and Stan. It stands out because no other character during this period treated Stan in the same way – everybody else tended to regard him with a generous indulgence. But although Ray’s largely put his bad boy past behind him, occasionally – as happens today – it comes bubbling back to the surface. No doubt he’s still smarting over the police raid and is simply looking for someone to verbally attack.

Alf is convinced everything will blow over. After all, it’s not as if the news is important enough to feature in the local paper, is it? Ah.

This is bad for all of them, but it’s Mrs Walker who’s the most upset – as an old picture of her and Alf (taken on one of their official engagements) was used in the article. Annie’s beside herself, convinced that everyone will believe she was also supping away at the Gatsby!

This sort of comic material was grist to Julian Roach’s mill whilst Annie’s incensed phone call to the paper gave Doris Speed the sort of material she always delivered so well.

Briefly dropping into No 13, if you’re more familiar with the décor of the living room post muriel (which is coming soon) then its current very brown appearance comes as something of a shock. For once Hilda and Stan aren’t at each others throats (and she’s looking quite presentable).

The air over at No 3 is far frostier though, with Emily, Ernie and Mavis struggling through a meal. The camera’s placed rather high to begin with, which gives us a bird’s eye view. It’s a nice little flourish (given its production line nature, Coronation Street didn’t tend to be the sort of place to find experimental directors plying their trade).

Emily and Ernie then have a ding dong row. Both seem convinced that they hold the upper hand (when Ernie exits, he requests that Emily apologises for her hurtful remarks). A pity that when he stormed out of the house he didn’t stop to think that she might bolt the door behind him. And so poor Ernie finds himself locked out, shivering in the cold night air.

The poster for the Superbrain competition rather tickles me (“A knockout competition for know-alls”). Oh, and chequered cap extra is back.

Mrs Walker has cast herself in the Magnus Magnusson role, kicking off the evening by quizzing George Benton (Dickie Arnold) on his specialised subject of pigeons (that’s not a Northern cliché, oh no). He does well, but not as well as Stan, who romps home the winner with seventeen points.

Since Stan has always been a perpetual loser, it warms the heart to see him emerge as the champion – not least because, for once, Stan has given Hilda something to be proud about. His success means he moves forward into the next round and whilst logic would suggest there will be a later reversal of fortune, for now he’s enjoying a rare feeling of achievement.