Skip to content
HomeThe Day of the Triffids on Blu Ray

When The Day of the Triffids came out on Blu Ray late last year it was greeted with a chorus of disapproval. Having recently acquired a copy, I was intrigued to find out how the various reviews published at the time addressed the hotly debated picture issues.

Some quick Googling later, it appears that whilst most of the reviewers were aware of the negative comments, they went on to dismiss the concerns raised – either because they hadn’t watched the serial since its original broadcast and so were unaware of how it had always looked or they simply believed that VT interior shots would never have the same quality as the film exteriors.

The arguments against the BD were basically threefold. Firstly the film sequences (which make up approximately 60% of the serial) had been oversaturated, lending some sequences a bright, sunny feel (rather at odds with the gloomy feel of the original). Next, the VT studio shots had all been “filmised” – but unlike various previous releases where this had been done accidentally, apparently this time round it was an artistic choice. Hum.

Lastly, the credits were remade. This is something that happens regularly on the Doctor Who DVDs and BDs, but they take extreme care to find fonts which match the originals – whereas on the Triffids BD a close approximation was used. Good enough for most, but an irritation for those who have lived with the serial for forty years ….

I could cope with the titles issue, but the grading and filmising are the sort of things which raise my hackles. We’ve been here before with grading problems – some of the Peter Davison Doctor Who DVDs looked a little odd (Black Orchid springs to mind) whilst accidental filmising has bedeviled various DVDs such as Softly Softly: Task Force series one (eventually fixed) and Grange Hill series one – four (never fixed, alas).

Modern televisions tend to handle filmising better than old ones (when I rewatched the early Grange Hill DVDs recently I found that it didn’t look quite as bad as I’d remembered) so the VT scenes in Triffids aren’t totally horrible, although knowing that they could and should be better is a tad irritating.

The film sequences are certainly dazzling – Jo’s yellow boiler suit leaps out of the screen, for example – but I think overall I prefer the more muted feel of the DVD. When I come back to Triffids in future it might be the DVD I’ll reach for, rather than the more glossy BD. What’s certain is that unlike some BD upgrades, I’ll be hanging onto the DVD.

Irrespective of how you watch it, you certainly should. John Duttine is very solid as the everyman cast in an almost impossible situation, with Emma Relph (an actress with surprisingly few credits) offering him strong support. Maurice Colbourne is always watchable whilst there are plenty of vividly sketched cameos (from the likes of Jonathan Newth, Stephen Yardley, David Swift and John Hollis).

With a limited budget, director Ken Hannam managed to effectively depict a London in turmoil during the early episodes (it’s amazing what a few sound effects and a handful of extras can achieve). There are some drawbacks – it was a pity that Bill (John Duttine) didn’t witness Dr Soames’ suicide as he did in the book – but having Bill return to find Soames’ body did mean that the production was saved the cost of an expensive stunt ….

Coming up to its 40th birthday, Day of the Triffids has lost none of its power to discomfort (amazing to think that it was deemed to be acceptable pre-watershed fare). 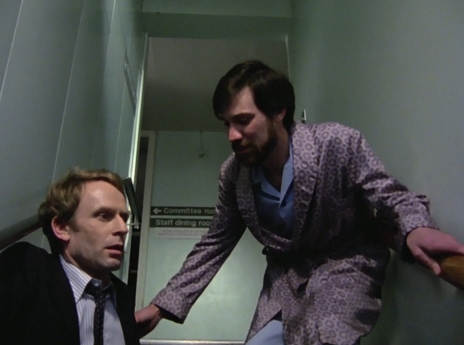 8 thoughts on “The Day of the Triffids on Blu Ray”